According to E.M. Lilien, Zionism would be the art of the new Jews through which the new Jews would represent themselves. 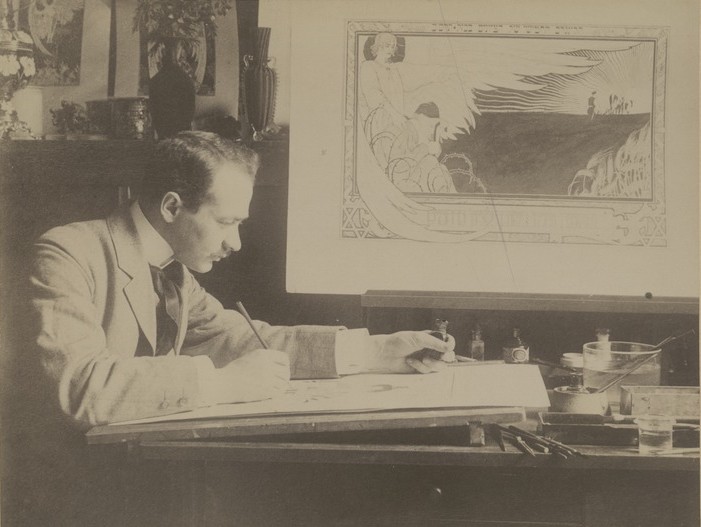 Ephraim Moshe Lilien at his desk, 1902. From the Schwadron Portrait Collection

In December 1901 the art nouveau artist Ephraim Moshe Lilien joined his compatriots in the Fifth Zionist Congress in Basel, Switzerland. There, he became part of an art revolution. Lilien, along with the Democratic Faction led by Martin Buber and Chaim Weizmann, called on the World Zionist Organization to adopt a program of Hebrew culture and a greater degree of democracy within the organization

Lilien’s friendship with Martin Buber enabled his art to become not merely Jewish, or nor be an artist with who worked with Jewish themes, but to be a Zionist artist and thus part of a movement that was not merely political and social, but cultural as well.

Lilen’s part in the art revolution began he attended the Fifth Zionist Congress. Born in Drohobycz, Galicia (now Ukraine) in 1874. By 1889 Lilien went on to study painting and graphic techniques at the Academy of Arts in Kraków until 1893. It was during that time that Lilien studied under the painter Jan Matejko, considered one of Poland’s greatest historical painters  from 1890 to 1892. Initially his art wasn’t specifically Zionist; at least he didn’t think so. But in 1900 he published his first major art project: He illustrated biblical scenes and Jewish images in the book “Juda, ballads of Börries von Münchhausen”, which is, ironically enough, a Christian retelling of the bible

He didn’t shy away from contemporary Jewish issues in his art.  When the Yiddish poet Morris Rosenfeld’s book, “Poems from the Ghetto”, was translated into German, he was commissioned to illustrate it for the German audience. He very seriously and diligently illustrated the suffering of the Jews as they migrated from one form of poverty in Eastern Europe to another in America, where the majority of immigrants became peddlers or sweatshop workers exploited by factory managers.

In 1903 the Russian persecution of the Jews came to a head during the Kishinev Pogroms. The Russian Empire’s oppression of Jews made it clear to Lilien that anti-Semitism had to be fought both politically and culturally and that the victims had to be honored.

It seemed that Lilien decided that art would be the gentle sledgehammer with which Jews would break the chains of the Diaspora. And the art of the new Jew would represent the new Jew. The illustration below shows the tension between the opposing forces of the Jewish world at the time. One line shows religious, traditional Jews moving backwards, whereas the other line shows modern, muscular Jews moving forwards towards the horizon.

Lilien went on several expeditions to the Land of Israel on behalf of the World Zionist Organization. One of these expeditions was with Boris Schatz in 1906, when they established the Bezalel Academy of Arts and Design, the emblem of which is Lilien’s design. Lilien also taught the school’s first class in 1906. Lilien didn’t stay at Bezalel or in the Land of Israel after that first year. He returned to Berlin in 1907, but continued to visit the Land of Israel periodically until 1918.

Lilien died in Germany in 1925 at the age of 51. A street in Jerusalem is named for him.

Information for the article gathered from The Art and Artists of the Fifth Zionist Congress, 1901 and Zionism and the Creation of a New Society.

The article was written with the help of Dr. Gil Weissblei.

All illustrations are by E.M. Lilien.