A Nice Jewish Doll: She Goes By “Barbie”

How Ruth Moskowitz Handler, the Jewish creator of the Barbie doll, changed history and the toy industry forever. 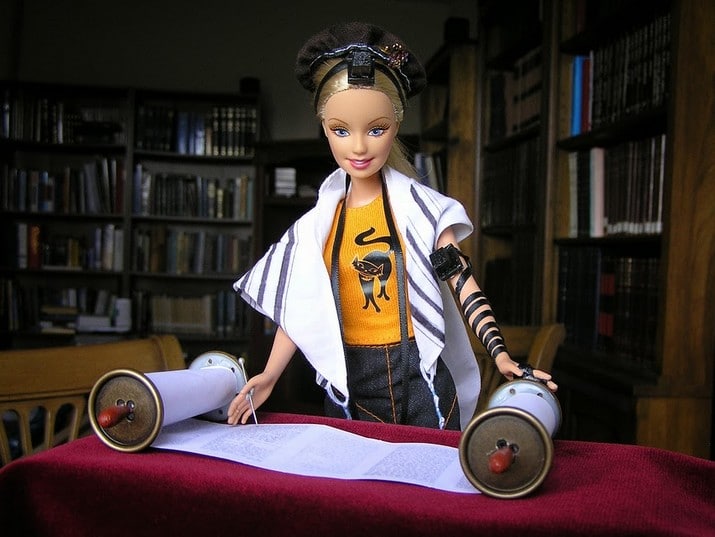 When Ruth Handler (formerly Moskowitz) traveled to Switzerland in 1956 with her family – her husband Elliot and their children Barbara and Kenneth – they came across a small figurine in a shop with a striking appearance: she was blonde, thin, and tall at 11 inches (28 cm). Her name was Lilli.

The Lilli doll was a novelty item for adults. The all-American Barbie doll, named for little Barbara Handler of course, debuted in 1959 would soon become a mass-produced doll for young girls (and also boys, we don’t judge, and neither should you). Barbie eventually solidified her status as the most popular doll in the history of toys. The Ken doll, which debuted a few years later, was named for Ruth Handler’s son Kenneth, of course.

Ruth Handler’s story, and Barbie’s, is part and parcel of the American story. The daughter of Polish-Jewish immigrants, Ruth Moskowitz was born the youngest of 10 children in Denver, Colorado. As a teenager she was sent to be a shop-girl in her aunt’s store, where she not only learned the basics of running a business, she fell in love with it.

During her marriage to Elliot Handler, the two formed a plastic and wood business, making props and toys for Hollywood studios and toy shops nationwide. Along with another business partner, the Handlers formed “Mattel”.

In 1959, after three years of development, Barbie sprang fully formed into the world, bathing suit and all. Barbie was a child’s toy with adult outfits, accessories, and most importantly – a job.

Handler herself wrote in her autobiography, “Dream Doll”:

“The idea had been the result of the many times I had observed my daughter Barbara playing with paperdolls with her friends… Barbara and her friends always insisted on playing with adult female paperdolls. They were simply not interested in baby paperdolls or even those representing ten-year-olds, their own age… I discovered something very important: They were using these dolls to project their dreams of their own futures as adult women.”

The Barbie doll was the first “adult” doll intended for girls – not a doll in the shape of a baby or a child, but one with which the young girl could play at being a grown up. Barbie was a loyal, mature companion.

The Barbie doll may not have a particularly Jewish “look”, but her heritage is Jewish and full of chutzpah. Ruth Handler was ambitious and held her own in the male-dominated world of business. She thought of young girls not merely as consumers, but as the future generation of women in America and all around the world. Well, almost all. Back in 2003 Saudi officials declared the “Jewish Barbie Dolls” a threat to morality.

You can’t please everyone.

Though Barbie’s Jewish roots may be bleached blonde, they are undeniable. Just by immigrating from Europe, changing her name and weaving herself into the very fabric of American life, the Barbie doll became an international sensation – a cultural icon that is both inspired and inspirational.

I Bet You Didn’t Know Captain America was a Golem! The Comic Books on the Ultra-Orthodox Bookshelf The Story of Regina Jonas – the First Female Rabbi