The Yankee Talmud Gives a Different Spin on Purim of 1892

Purim is upon us! And it so happened that the 1892 American elections happened at around the same time. And so Gershon Rosenzweig, a Hebrew author and Jewish immigrant to the New World, wrote "Tractate America", to answer the question of who will win the election – the one with the most gold. 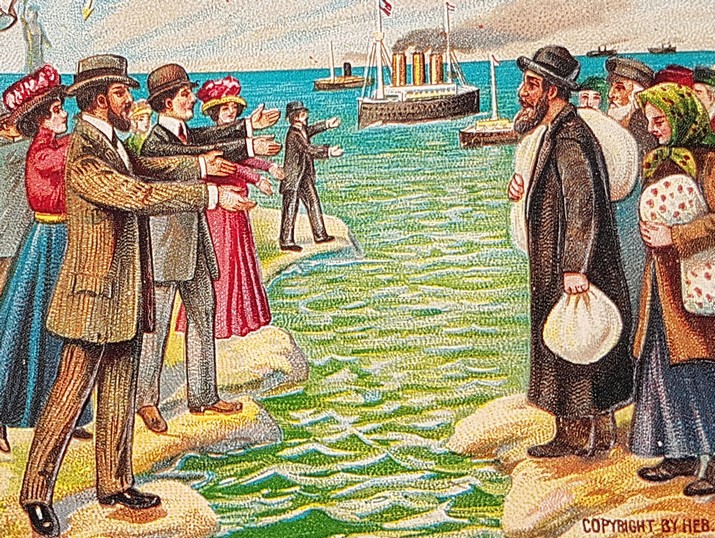 The large wave immigration of Eastern European Jewry to America began in 1881. For them, America was an unknown country, but was also “der goldener medinah”, a country which promised a safe haven, liberty and equal rights, regardless of religion.

The immigrant Jews saw America as a completely different diaspora than Europe. It was a place where they could continue to live as Jews while taking part in building a new and improved society; a far-cry from the intolerant and tyrannical regimes they left behind.

America, the capitalist country who truly did worship a golden calf.

In a world without internet and television, it was authors and journalists who painted the picture of America for the Eastern European Jews, people like famed Yiddish author Shalom Aleichem (Shalom Yaacov Rabinowitz) and Gershon son of Zalman Leib Rosenzweig who wrote a humorous Purim tractate about the improper characteristics and the ugly deeds and customs “which the Americans are not immune from”.

Rosenzweig was born in Bialystok in 1861. He studied and worked there as a teacher, and in 1888 left to build himself a new future in America. He lived in New York, where he worked in different professions: teaching, a worker in a shoe store and Yiddish journalism. Concurrently he worked “to bestow a Hebrew newspaper on the Jewish people in America”. His love for his beautiful new country did not blind him to its shortcomings, which he wrote about in his special parodic and cynical writing style.

In his own words, he was one of the Americans “who knows this country, and the livelihood and the rottenness [in Hebrew – מחיה וקלקלה a play on words found in the Grace After Meals] within it, and not those who live across the sea and see dreams in America”.

His most famous parody is “Tractate America”, a humorous “Talmudic tractate” in which he criticizes the materialism, spiritual poverty, greed and servitude to money which were also part of Jewish life in America. He wrote especially for Purim and the 1892 elections of that year.

Rosenzweig wrote the tractate in Talmudic language, in the style of the Talmud with the commentary of “Rashi”. So, for example, one of Rosenzweig’s imaginary “sugyot” (Talmudic topics) asks: Why America?

And the ‘Talmud’ answers: “Because empty [in Hebrew – reikim] and reckless people came to it, and it is the place of an Ama Reika (lit. an empty nation – a stupid nation)”. And: “Because it cleanses [in Hebrew – memareket, a play on the word America] the sins of sinners who become pure in it and of unfit people who become pedigreed in it”.

The humorous Tractate America continues: “Ten statuses came first to America, and they are: murderers, thieves, reporters (of Jews to the secular authorities), ignitors of houses, printers of banknotes, sellers of souls, false witnesses, bankrupt people, people who were excommunicated and rebellious sons. And there are those who say even girls who were tempted”.

Rosenzweig also explains that Tractate America is part of the “Yankai” (Yankee) Talmud. Why Yankai? In the name of the Yankees – the residents of the north eastern states of the USA and “in the name of the citizens who absorbed [yank]) the Torah of America in their childhood“.

It’s All About the Gold

The first edition of Tractate America was published in New York in 1892, which was also an election year. The president elected in those elections was Grover Cleveland, the 22nd and 24th president – the only president in American history to be elected for two non-consecutive terms of office.

This was his second term of office. Cleveland was known as being arrow-straight, a warrior against corruption, and a sworn capitalist who supported reducing taxes and believed that federal government should limit its involvement in economic issues as much as possible.

Part of his election campaign revolved around the American currency policy. At the time, Cleveland fought for “the Gold Standard” – linking the currency to gold, which enabled any person to enter any bank and exchange his banknotes for gold. In the period which preceded Cleveland’s term of office, the dollar was linked not only to gold, but to silver as well, which was less stable.

This caused fluctuations of the economy, which continued, and even worsened, during Cleveland’s term of office. Through no fault of Cleveland’s, his second term of office is known for a series of economic disasters: a railway company collapsed, hundreds of banks closed, thousands of farmers and business owners went bankrupt, the stock exchange plunged, and the country fell into a deep economic crisis. The crisis was so deep-seated that it destroyed the Democratic Party and caused it to split.

So how is a president elected in America? Here are several related “sugyot” found in Tractate America, possibly even on the backdrop of that tumultuous election, and the “Gold Standard”:

How are Presidents elected in America?

“Each and every president appointed in America, is appointed by casting lots. What are lots? Bribery.”

According to Rosenzweig’s humorous Talmud, no president is elected without bribing his voters and scattering his gold to “the politicians“.

“It says in the Mishna, the gold buys the president and the judge and Rabbi Yankee says even the tyrant.”

This is followed by a scholarly discussion whose conclusion is: “From here we learn that anyone who has gold becomes pleasant, good and pure“.

Don’t believe it? Here is the “sugya” before you:

In humorous tractates and newspaper articles Rosenzweig continued to write satire about the difficulties experienced by the Easter European immigrants and their new lives in America… he is also known for “Tractate Lies” about April Fools’ Day pranks and “Tractate Camouflage” about Purim costumes.

Rosenzweig died in New York in 1914, but has never been forgotten. His works from the “New World” of the time are read and reread to this day by Hebrew readers who find them to still be as relevant ever.