Abraham Adolf Fraenkel, a doctor of mathematics, served in the German army during the Great War and organized a Passover Seder for his fellow Jewish soldiers. 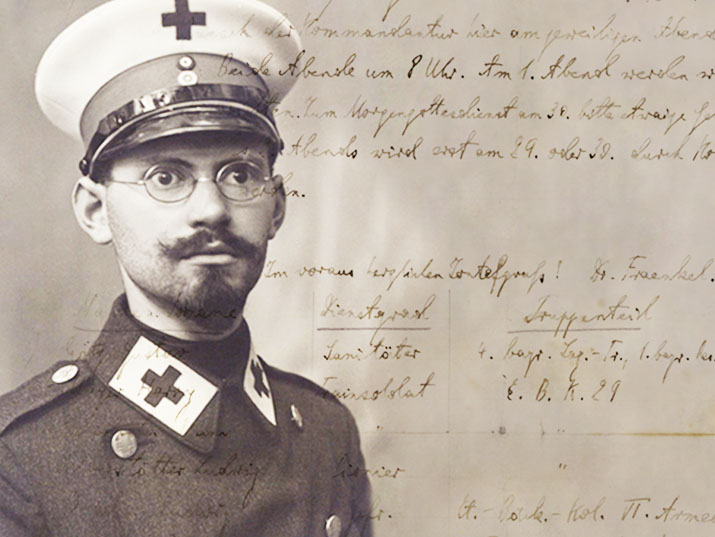 During the Great War in the early 20th-century young Jewish men all across Europe joined their peers in enlisting in the military to serve their countries, with over 100,000 Jews joining the German army alone. Included in the ranks of these brave men was the Bavarian soldier Abraham Adolf Fraenkel, a doctor of mathematics, who later recounted his experiences as a Jew in World War I in his memoir, “Recollections of a Jewish Mathematician in Germany.”

In his memoirs, Fraenkel describes the difficulties he faced as a traditional Jew in the military “especially regarding food but also concerning prayer, phylacteries, not shaving and many other things.” Though he was able to maintain his kosher diet, he found himself rarely able to maintain the traditions of Shabbat.

In 1915, Abraham found himself serving as a medical orderly for the army, which included such responsibilities as transcribing autopsy reports from dictation and assisting in minor surgeries. During his two years of service in the field hospitals, Fraenkel was also authorized by the Bavarian Ministry of Culture Affairs to serve as the Jewish chaplain to his peers in the military. While this position did not reduce the responsibilities he had in his day to day service, it did offer him a chance to stay connected to his religion and to assist others in maintaining their traditions as well.

In 1915, Fraenkel was stationed at the military hospital in the French city of Cambrai. Fraenkel explains in his book that he was responsible for the religious affairs of the Jewish soldiers. He filled the gap between their religious needs, and the availability of the army chaplain rabbis, who were not able to always be where they were needed. Fraenkel took his position seriously, arranging for prayer services in the field and ensuring the religious soldiers could celebrate their holidays as in line with the tradition as possible.

At the end of March 1915, Fraenkel prepared to celebrate the Jewish holiday of Passover and prepared a list of the local soldiers who were interested in joining the Seder, the traditional meal where the exodus of the Jews from slavery in Egypt is recounted, which was set to take place on the 29th and 30th of March.

“Participants are asked to specify if they plan to attend both evening meals or just the first,” read the registration sheet. Participants were advised to request leave for religious reasons so they would be granted a permit to attend the festivities. Registrants were advised that they would only receive their leave on the day of the holiday and it was suggested that if they planned to attend the holiday prayer services, they bring their own prayer books – if they had them of course.

A total of nine soldiers registered for both of the Passover Seder including men serving as medics, logistics officers, combat engineers and one who was serving in the newly formed German air force who did not specify which Seder he planned to attend, perhaps because he knew there was a chance he would be called away at the last minute.

During the second half of World War I, Fraenkel transferred to a weather-forecasting unit, a job that better suited his outstanding talents as a mathematician. At the end of the war, Abraham Frankel returned to Marburg University, and later, went on to serve as a professor of mathematics in the city of Kiel, in northern Germany. In 1926, the mathematician visited the Land of Israel together with his family, and three years later, he moved to the country and was appointed as a professor of mathematics at The Hebrew University. In 1938, he was even chosen to be rector of the university. In Israel, he published mathematical works and devised many mathematical terms for concepts that until that time did not exist in the Hebrew language.

Special thanks to Dr. Stefan Litt for his assistance in writing this article.