Fritz Groll was a German officer sent to Ottoman Palestine at the height of World War I in order to assist Ottoman forces. Along the way, he photographed the country’s landscapes, cities and sites, from the ground and the air 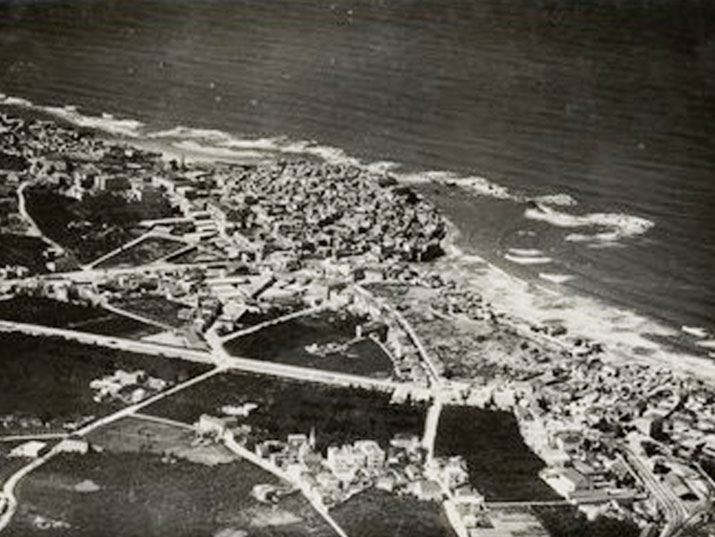 Aerial view of Jaffa. From the Fritz Groll photo album, the National Library of Israel collections

By 1916, things were looking rather bleak for Ottoman forces in the Middle East. They were finding it difficult to repel the multi-pronged attack by the British. The Great Arab Revolt began in the summer, led by Emirs Abdullah and Faisal, with the support of Great Britain which had sent Lawrence of Arabia to the region. Even before the outbreak of World War I, the Ottoman Empire had become known as “the sick man of Europe.”  At this point, after two years of fighting, the sick man was on his deathbed.

The Ottoman Empire’s German allies could no longer remain on the sidelines. They needed the Turks to engage the British in order to distract them from the critical battles on the Western Front. Indeed, following pressure from senior military officials, in the spring-summer of 1916, German units were finally dispatched to the Middle East to fight alongside the crumbling Ottoman army.

These units, which included an air squadron, arrived in preparation of the final Turkish-German offensive against British forces in Sinai. The German army excelled in the use of aircraft, at the time a new and not so reliable means of transportation, which was being used in war for the very first time. Accompanying the squadron was Fritz Groll, a 40-year-old German officer who was also the commander of a new unit dedicated to aerial photography. This was Groll’s first visit to Ottoman Palestine – the Land of Israel.

But Groll, along with his comrades in the squadron and other German units, did not treat the Land of Israel merely as a military destination. Like any avid tourist—or pilgrim—Groll documented his journey from Europe’s shores through Turkey, Syria and Lebanon, to the Land of Israel. He photographed the Bosphorus, documented the streets of Damascus, his various travels and the people he met along the way, as well as his comrades in arms. The German soldiers’ uniforms hint somewhat to the military’s colonialist attitude toward the Holy Land and the Middle East (note the pith helmets). On the other hand, Groll filled the pages of his album featuring photographs of the Temple Mount and other holy sites in Jerusalem with dense, hand-written and enthusiastic descriptions. Despite the outdated photographic equipment, it seems that Groll documented non-stop: Haifa and Jaffa, Be’er Sheva, where the forces were stationed, and even two pages of photographs of the town of Ramla.

It is worth taking a closer look at this magnificent album, which was donated to the National Library of Israel by Ms. Ruth Schell of London, through Prof. Benjamin Zeev Kedar, who researched Groll’s photographs. The dozens of pictures afford an authentic view of the Land of Israel of that time, at the end of 400 years of Ottoman rule. The complete album is available for viewing, here.

Thank you to Dr. Gil Weissblei for his help in preparing this article.