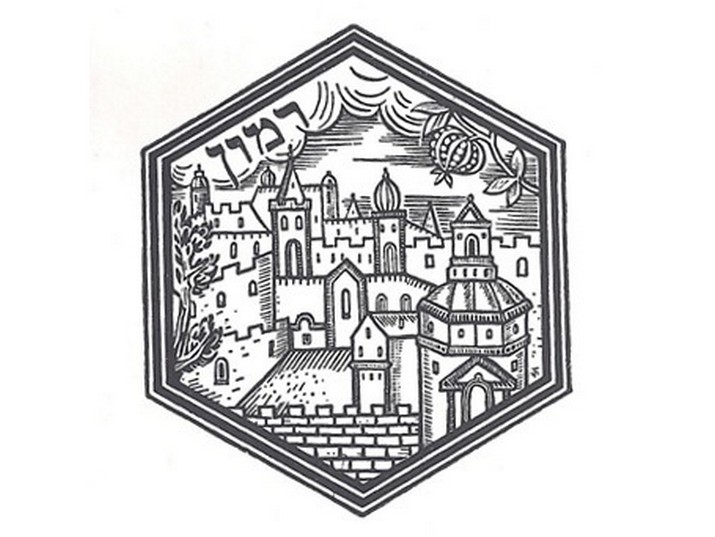 In early autumn of 1922, the premier issue of “Rimon”, the first Jewish journal devoted to art, was published. The Hebrew-language readership, which until then had been accustomed to various journals and literary collections printed on cheap paper with cramped lettering, was stunned by the exceptional quality of this innovative journal, not only in terms of its content – serious articles dealing with all aspects of Jewish art – but also from its excellent typographical quality, the fine paper on which it was printed and the abundant colorful, eye-enchanting illustrations it incorporated.

The driving force behind Rimon was a small circle of Russian Jews, headed by historian Mark Wischnitzer and his wife, art historian Rachel Bernstein-Wischnitzer. In late 1921, the couple joined a group of Russian-Jewish émigrés in Berlin. They presented the idea of publishing a Jewish art journal to their friend Leopold Sew, a Russian-Jewish intellectual who was visiting Berlin from Paris, where he had fled after the revolution. Sew was excited by the idea and referred the couple to Eliahu Feinson, who belonged to a group of Jewish-Russian capitalists who supported Hebrew publication projects. Feinson enlisted with fervor in the publication of Jewish art books, and provided the necessary funding for commencing the work. His name appeared on almost all publications of the company as one of its three directors, alongside Dr. Mark Wischnitzer and Alexander Kogan, two of the great Russian publishers who had come to Berlin during this period, and were involved in the production of one of the most esteemed journals to be published in both Russian and German, “The Firebird” (“Jar-Ptiza”).

Despite the defeat of Germany in World War I and the lack of political stability that characterized it in the years that followed, the publishing industry recovered rapidly and continued to be among the most progressive and advanced in the world, as it had been in the past. The spiraling inflation in the Weimar Republic at the time severely damaged the local industry and economy, but on the other hand, it gave owners of foreign capital the possibility of producing published materials at a high standard for a very low cost.

Between 1921 and 1923, over thirty different Hebrew publishing houses were active in Germany, many of them in Berlin. These publishing houses succeeded within a very short span to print hundreds of Hebrew titles of a quality unprecedented in the world of Hebrew publishing of that time. During this period, Jewish-German publishers, like their German colleagues, were in the throes of a deep economic crisis. In contrast, the state of Jewish immigrants from Russia was radically different. Most of the financial institutions of the Zionist Movement were located in the United States and Britain. The philanthropists who provided the funding for many Russian refugees to stay in Germany conducted business outside of the Weimar Republic. The small sums (in terms of the dollar or sterling) that were sent regularly to Jewish immigrants in Germany were thus sufficient to enable them to live respectably. Therefore, despite the ostensibly low status of Russian Jews in the Weimar Republic as immigrants and refugees with no legal standing, they had a tremendous advantage over their local German-Jewish brethren.

Emerging from the multi-lingual reality that characterized the society of Jewish-Russian immigrants in Germany was the idea to publish, in parallel to the issues of “Rimon”, a Yiddish edition called “Milgroim”, which like the Hebrew word “rimon,” means pomegranate. Some of the articles on art appeared in identical form in both language editions, while the literary component was different. Although “Milgroim” is one of a long list of Yiddish journals founded by the literary hub of Eastern-European Jews in Berlin at the beginning of the 1920s, it is completely unique in character due to the visual language through which it communicated to its readership.

The similarity between the twin journals in Hebrew and Yiddish, “Rimon” and “Milgroim”, published by the Wischnitzers, and the Russian journal published by Alexander Kogan, is not only in the covers notable for their bold colors. Like Kogan, the Wischnitzers also viewed the Middle Ages as the “golden age” of art as a source of inspiration, and this can be readily discerned not only typographically (the shapes of the Hebrew letters drawn from those appearing in Ashkenazic and Sephardic Hebrew manuscripts) but also in other motifs in medieval folk art, as well as in the revival of additional motifs that were typical of early manuscripts and printed materials.
Overall, between 1922 and 1924, seven titles were published by the “Rimon” publishing house, some of them in three and even four languages (a total of twelve books), in addition to the six editions of the “Rimon” journal and six additional editions of its Yiddish corollary “Milgroim”. In 1924, following the halting of German inflation and the stabilization of the mark, the economic conditions that enabled the inexpensive publication of books no longer existed, and this original publishing house came to an end, like many of the Hebrew publication establishments that emerged – and disappeared – during this brief and intensive period.