The German Film “Dreyfus” and its Screening in Israel

What was special about this film that made its way from the studios in Berlin to the movie theaters in Eretz Israel? 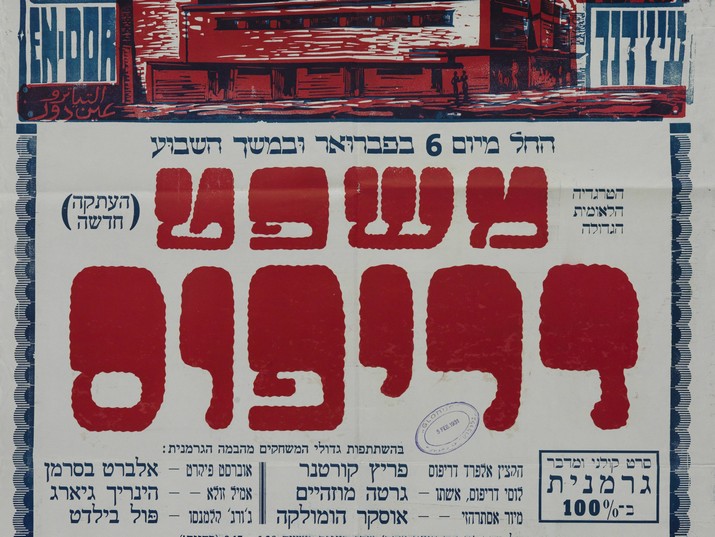 In February 1931, advertisements were posted in Israel for a new film – one of the first sound films – that was being played in movie theaters. The poster, in shades of red and blue on a white background, suggested that the film had something to do with France. The name of the film left no room for doubt: “Dreyfus.” The poster of the Ein Dor movie theater in Haifa advertised the film in four languages: Hebrew (which takes up approximately two thirds of the poster), German, Arabic and English. This multi-lingual venue was an expression of the multi-cultural reality of Mandatory Palestine at the beginning of the 1930s. Since the film was a product of the Weimar Republic, and since during that time the Nazis had not yet risen to power in Germany, the free use of German on the poster was still not problematic – on the contrary; a point of persuasion for seeing the film apparently included its language. As the poster stated: “100% in German.”

What was special about this film that made its way from the studios in Berlin to the movie theaters in Eretz Israel? First of all, since the Dreyfus Affair, slightly more than three decades had passed, and it is reasonable to assume that at the time, there were still people who remembered this important incident in Jewish history, which so decisively affected the Zionist movement after Theodor Herzl reported on it for a Viennese newspaper, before he began writing his famous Zionist works. Moreover, the very topic turned the movie into a work that spoke directly to the Jewish audiences. The film’s production in 1930 also was a response to the anti-Semitic atmosphere in Germany, which quickly became dire. In addition, a look at those involved in the film’s production – from the author of the script, to the director and most of the main actors – reveals that most were of Jewish extraction. These circumstances apparently made the movie an excellent candidate for screening in Eretz Israeli movie theaters and granted the Dreyfus Affair the status of a “great national tragedy” as stated in the colorful poster presented here.

Who, then, were the key figures surrounding this German-Jewish film produced towards the end of the Weimar Republic? The producer and director was the Richard Oswald (1880-1963), a Vienna native who had been living and working in Berlin since 1912. In Berlin, Oswald went on to establish a film production company that produced dozens of films, among them films that were unconventional for the period. For example, after consulting with the famous sex researcher Magnus Hirschfeld, Oswald produced films dealing with topics such as homosexuality, abortions, prostitution and sexually transmitted disease. His emigration from Germany in 1933 following the Nazi rise to power significantly reduced his opportunities for producing additional films. Most of the main actors in the movie “Dreyfus” came from the famous acting school of Max Reinhardt, director of the “German Theater” in Berlin: Fritz Kortner (Dreyfus), Grete Mosheim (Dreyfus’ wife), and Oscar Homolka (Maj. Esterhazy) – all were of Jewish origins. Following their emigration to the United States, some of them secured a place in the American film industry (for example, Oscar Homolka, who acted in Hollywood with Marlene Dietrich, John Wayne, Ronald Reagan and Marilyn Monroe). Others returned to Germany after WWII, such as Fritz Kortner and Grete Mosheim. Acting alongside them in the film was also Heinrich George, one of the well known actors in Weimar Germany, who began his career as a supporter of the political left in Germany, and after 1933 compromised with the Nazis, enabling him to continue his career under their government.

As far as is known, the movie “Dreyfus” was successful in Eretz Israel. There is an interesting incident that is related to the movie “Dreyfus” and its screening in the Ein Dor Cinema (the Hebrew word used for cinema at the time was reinoa, as opposed to the modern kolnoa) in Haifa. Shortly after the first regular screenings, the film reels were stolen and the cinema owners were forced to acquire a new copy. After the second copy was obtained, they re-advertised the film – which they would certainly not have done had the film not been a success in the first round.

Two posters of the Ein Dor Cinema in Haifa advertising the film can be found in the National Library collections, but during the inquiry that preceded the writing of this text, it emerged that the library also owns a single copy of the original script in German. This rare copy reached the library after WWII together with thousands of Jewish books as part of the book rescue operation that became known as “Treasures of the Diaspora”, saving precious library materials to Jewish institutions including the National Library. Other copies of the movie still survive in various film archives around the world.