In the late 1850s, this group, under the leadership of Christoph Hoffman, began exploring the possibility of living according to their spiritual-religious ideal not merely inside Germany, but in close proximity to the location of the Jewish Temple: in Jerusalem 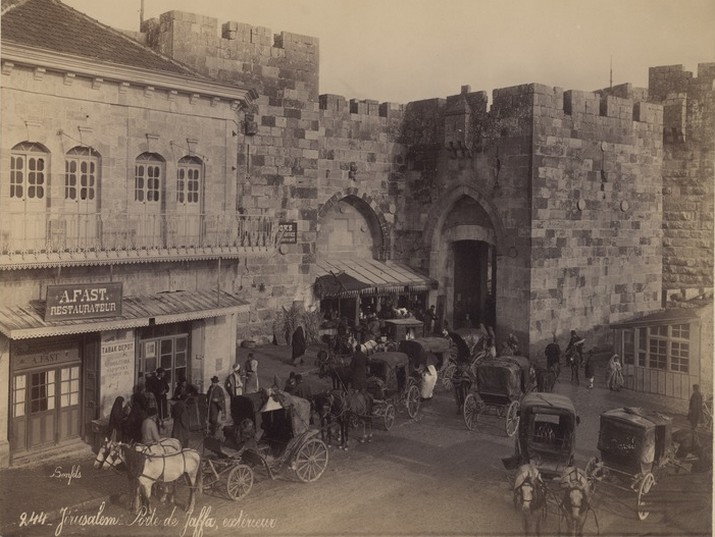 The Fast Family Hotel near the Jaffa Gate in Jerusalem, early 20th century

In the mid-19th century, a number of Protestant families in southwest Germany decided to establish a religious group that was distinct from Lutheran Protestantism. They viewed themselves as “bricks” that made up the ideational temple of communal life based on the principles of Christianity. For the Templers, Jesus was not defined as the son of God, but as a religious teacher and an example and manifestation of the honest life.

In the late 1850s, this group, under the leadership of Christoph Hoffman, began exploring the possibility of living according to their spiritual-religious ideal not merely inside Germany, but in close proximity to the location of the Jewish Temple: in Jerusalem. They chose this path since as Christians they viewed themselves as “the new people of Israel.” In 1868 the group’s first settlers reached the shores of Eretz Israel. They purchased lands in the Haifa area and established their first place of residence, which exists physically to this day (the “German Colony” of Haifa). Over the years, additional settlers arrived and established a number of communities in Jaffa (1869), nearby Sarona (1871), Jerusalem (1873), and later, in Wilhelma (1902, today: Bnei Atarot), as well as at Bethlehem of Galilee (1906). Together with these localities, religious and educational institutions sprung up, as well as businesses of various types. In 1878, some 850 people were living in Templer communities, by 1884 the Templer residents in Eretz Israel numbered 1300, and on the eve of WWI, this number climbed to approximately 2,000 people, which was the peak of their history in Palestine.

The Templers worked in agriculture (cultivation of citrus and grapes), established small factories (the iron and tool-making industries), ran a press house, established hotels, published a newspaper (Warte des Tempels – The Temple Guard) and also had a bank, which participated in the Transfer Agreement beginning in 1933. Constructing proper roads between the various localities was extremely significant for the existence of the Templer enterprise. The presence and activity of German Templers in Eretz Israel were therefore of utmost importance for its economic, agricultural and industrial development, many years prior to the impact brought to bear by Zionism. In many realms it was Templers who initiated basic activities that were important to Israel’s development.

Until the end of WWI, when the British forces conquered Palestine, the residents of the Templer communities were deported from the southern localities to a camp near Cairo, Egypt. Some of them were deported from there to Germany, while others continued living in this camp until 1920, and afterwards were permitted to return to their homes. During the Mandate Period, good relations developed between Templers and the Mandate authorities, and between them and the local population, both Jewish and Arab.

One of the proofs of the commercial ties between Jews and Templers in Eretz Israel is the document displayed here, a letter of recommendation from the Director of the Templer Bank, Christoph Hoffman, for the Jewish industrialist Shaul Levi. Hoffman wrote his recommendation from the perspective of his position as director of what was at the time an important bank in Eretz Israel. In the letter, he confirms that for 25 years he has known Levi to be an honest, respectable and solid businessman. Shaul Levi operated a business in the iron industry, with branches in Jaffa and Jerusalem. Hoffman’s recommendation leads us to assume that Shaul Levi managed his business funds through the German Bank in Eretz Israel, which earned a reputation as a dependable, stable institution.

As is well known, not all of the Germans in the Templer communities were interested in continuing as loyal citizens of Eretz Israel during the British Mandate. Some of them established a branch of the Nazi party, and a significant number of the German settlers joined it. Of course, this move was not warmly received by the Jews of Eretz Israel. The British Authorities, on their part, were not overly concerned, until the outbreak of WWII. From September 1939 the Templers were considered as “hostile citizens” due to the German citizenship that most of them held – and also due to the political views of some of them. As a result, Templer families were concentrated into a number of their localities, and a few were even deported to Australia. The last left in 1948, with the establishment of the state. Today, many of the buildings that the German Templers erected are still standing. In certain cases, the Templer communities became prestigious neighborhoods as in Haifa and Jerusalem. Of late, the case of Sarona in Tel Aviv has become prominent; the area was recently turned into a gentrified Tel Aviv neighborhood and transformed into a locus of leisure and entertainment.