“Transfer Agreement” and the Boycott of German Goods 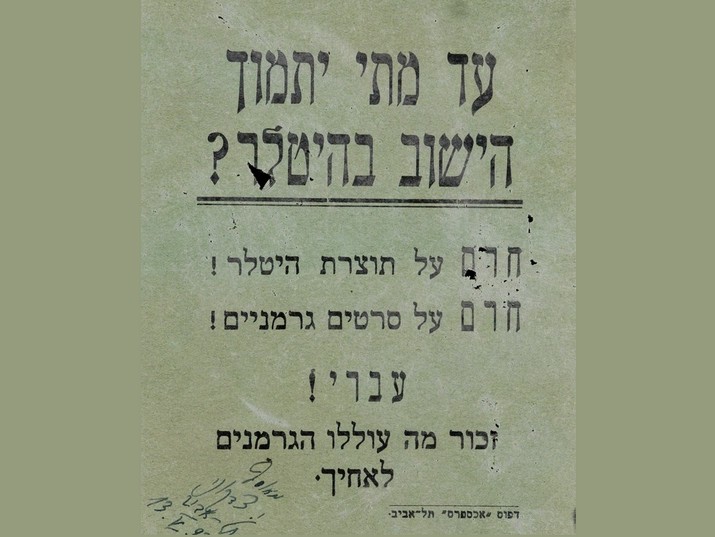 Beginning in the spring of 1933, objections began surfacing against the procurement of German goods. Jewish organizations appealed to the public to forgo the purchase of goods from Germany through declarations and placards, with the goal of striking a blow at the German economy, and in this manner, to the power of the Nazis who had recently taken power. The anti-German boycott was initiated following the Nazi boycott initiated on April 1, 1933, against Jewish businesses in Germany. Following this, the Jewish organizations in various countries called for a boycott of German products available around the world, including in Palestine. The boycott in Palestine itself would have little effect on the German economy, but the joint effort in various countries, including the United States, had an impact, although it did not affect Nazi policy towards German Jewry. 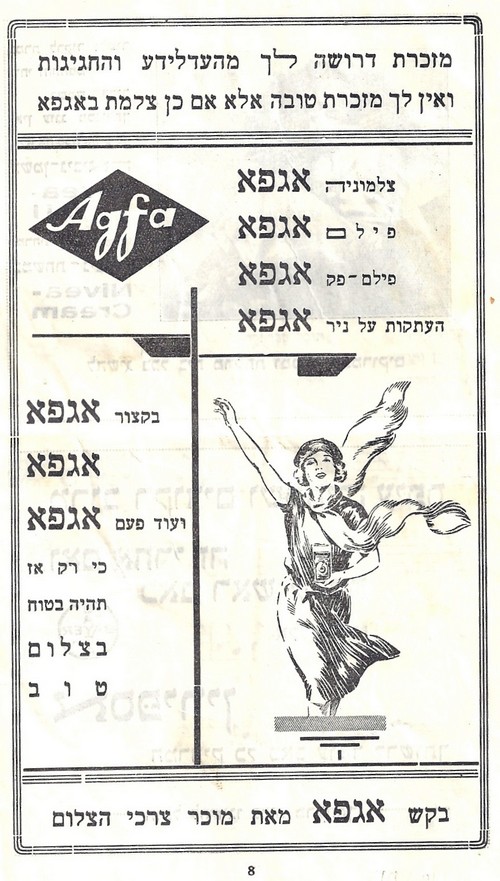 During this same period, German products were considered to be of particularly fine quality. Germany was already at the time a highly industrialized nation and its products were marketed internationally. Importers and retailers in Palestine sought to sell products from German factories and promoted them through ads and placards, some in Hebrew and some in Hebrew and German. The expertise of German factories in the production of machines and technical products guaranteed great success for products, especially in Palestine of the 1930s, where many branches of local industry were just beginning to develop. Despite the boycott, there were some German products sold in stores in Palestine, such as medicines manufactured by Bayer and photographic equipment manufactured by AGFA, that were promoted in the newspapers and other advertising venues (for example, in Purim celebration programming in Tel Aviv). 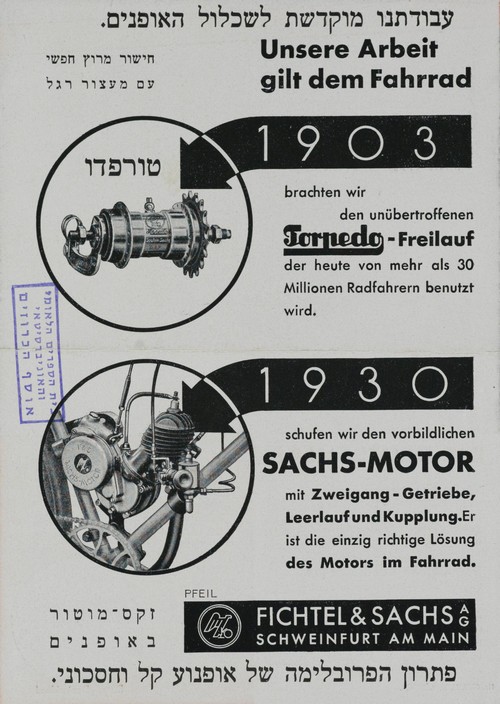 Following the call for a boycott – mainly instigated by the Revisionist camp – leaders of the Yishuv faced a difficult dilemma. At that time (August 25, 1933), a “transfer agreement” was signed with the German Nazi government. Both parties had a vested interest in the agreement. The Nazi leaders hoped that through it they could minimize the worldwide boycott on German products. During these years, the Nazi leaders were still of the opinion that they should promote voluntary Jewish emigration from Germany in order to “be rid” of the “Jewish problem.” On its part, the Jewish side hoped that the agreement would enable German Jews who wanted to immigrate to Palestine to bring with them a more significant portion of their possessions.

In 1931, following the global economic crisis, those who emigrated from Germany were forced to pay exceedingly high taxes for the transfer of their property to points abroad; this policy remained in effect during the Nazi period. As part of the agreement, German Jewry was given the option of depositing a minimum of 1,000 lira in a German bank, and with the money, German products were purchased for export to Palestine.

In Israel, the importers sold the German products and deposited the funds in a bank account, from which a significant sum was returned to the immigrants on their arrival. It is estimated that tens of thousands of German emigrants did just this in order to prevent simply giving their capital to the Nazi German tax authorities. Inevitably, the agreement and its results, i.e. the import of German products to Palestine during the time of the boycott – aroused a stormy debate. On the one hand, there was severe opposition to the transfer agreement, but on the other, there were also voices of support, for example, on the part of the German Olim Association, which was afraid to negatively impact the transfer of property belonging to German Jews who had not yet come on Aliyah. 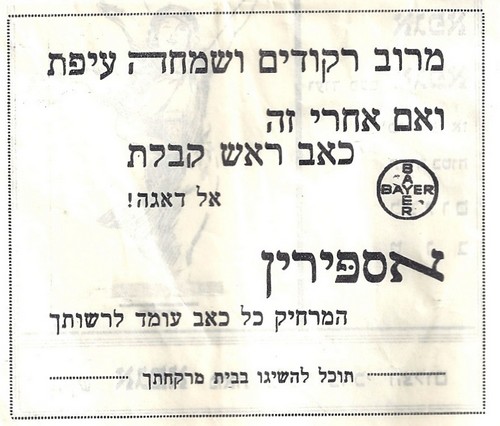 Public activity surrounding the boycott continued throughout the 1930s, and the transfer agreement remained in effect during these years. It is estimated that some 140 million German marks were transferred by this mechanism to Palestine until the outbreak of World War II in September 1939. Economically, the transfer agreement was a great success, both in terms of German emigrants and for the Palestinian economy. The negotiator for the Jewish side was Haim Arlozorov, but he was murdered in Tel Aviv before the agreement was signed. The circumstances of the murder and its motives are to this day not entirely clear, but there is a possibility that the motive was related to Arlozorov’s role in the Negotiations with the German-Nazi side. 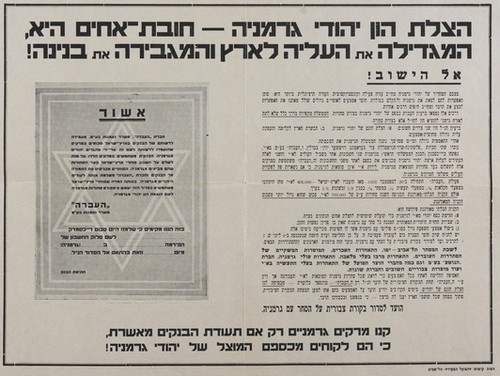 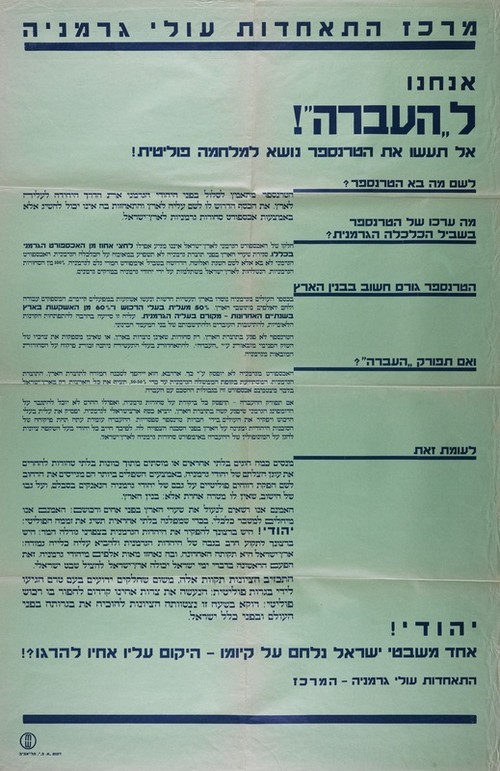