Every work of art that did not conform to the Nazi definitions was declared “degenerate art” (Entartete Kunst), art that in the opinion of the German rulers from 1933-1945 was not art, but rather a scribble that was mocking of the German people 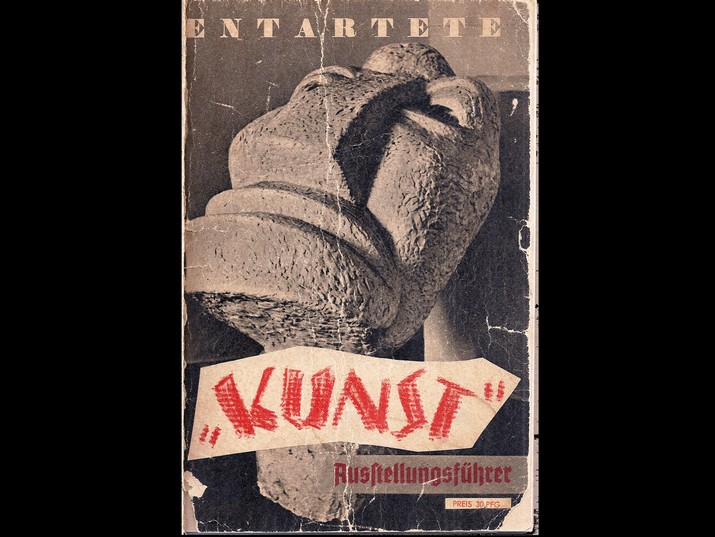 The cover of the “Degenerate Art” exhibit brochure, 1937

It is no secret that the Nazi’s view of art was contrary to conventions and prevailing attitudes that were accepted among leaders in the art world just prior to the Nazi period. With their rise to power in 1933, the Nazis were given an opportunity to implement their approach, which placed on a pedestal what they referred to as “German art.”

The Nazis were opposed to avant-garde artists and certainly to those who were not from Germany and operated outside of it. The new rulers supported native German artists who adapted their style to the official requirements set by the leading Nazis, and foremost, by Adolf Hitler and Propaganda Minister Joseph Goebbels. They preferred the realistic style, which was sometimes even monumental, manifested, inter alia, in grey and cold architecture that created enormous spaces planned for an anonymous mass. Examples of this architecture can be found in a scattering of German cities, such as Berlin, Nurnberg, Weimar, Munich and others.

In contrast, every work of art that did not conform to the Nazi definitions was declared “degenerate art” (Entartete Kunst), art that in the opinion of the German rulers from 1933-1945 was not art, but rather a scribble that was mocking of the German people.

Modern artists were in the direct line of fire, as well as entire streams of modern art, such as expressionism, dada, as well as artists’ associations such as “The Bridge” (Die Brücke), “The Blue Horseman” (Der blaue Reiter) and others. Many artists who worked in these styles were banned and forbidden to continue in their artistic work. Nazi clerks “purified” the museums, fired many directors – among them, of course, all of the Jews – as well as those who did not agree with the new direction.

The Nazis raided museum storehouses and emptied them of thousands of works of classical modern art. A small portion was selected for an exhibition called “Degenerate Art,” which opened on July 19, 1937 in Munich. However, most of the other works were sold to foreign clients or disappeared.

By acting in this manner, the Nazis created a painful lacuna in the documentation of modern art in the German museums, which in some cases has not been filled to this day. Among the artists adversely affected by the confiscation of their works and the prohibition against creating were important names that prior to 1933 had been held in high esteem in many museums in Germany, and are today valued around the world: Max Beckmann, Emil Nolde, Karl Schmidt-Rottluff, Ernst Ludwig Kirchner, Marc Chagall, Paul Klee, Lyonel Feininger, Wassily Kandinsky, George Mucca, Oskar Schlemmer (the five were lecturers in Bauhaus), Oscar Kokoshka, Franz Mark and others.

The Nazis wanted to blacken the name of modern art and to convince the German public that it was not proper and true art. To this end, they prepared the famous exhibition in Munich, which in the course of five months attracted over two million visitors. Some of the visitors certainly came in order to part forever from important works, but there are reports that most of the visitors actually agreed with the Nazi opinions and complained about what in their eyes was not art, and for the fact that prior to 1933, large sums had been paid for acquiring them. The exhibition featured 600 works by 112 artists, including only six Jews. At the same time, the Nazis opened the formal art exhibition, the “The Exhibit of Great German Art,” also in Munich, attended by 600,000, a number that is less than one third of the number of visitors to the “Degenerate Art” exhibit.

Following closure of the exhibit in Munich in November 1937, it wandered among 12 other cities in Germany and Austria until 1941. Each time, the collection of works featured was changed, and propaganda material was also produced such as announcements and booklets (some of which can be found in the holdings of the National Library of Israel), all with the goal of intensifying the effect on visitors to the exhibit.

The texts of the pamphlet present a very clear picture: the authors felt that art prior to the Nazi rise to power had reached the first chapter in its history, which was rotten, distorted and influenced by Bolshevism and of course, by Jews. Absurdly, the Nazis in this manner helped to define the canon of classical modern art, which after 1945 regained its valued position, even in German museums.