“Faust” by Johann Wolfgang von Goethe and its Translation into Hebrew

German immigrants to Israel from the “fifth Aliyah” often carried volumes of Goethe’s works with them to Israel, in the attempt to retain something from their lost homeland, at least, at the cultural-linguistic level 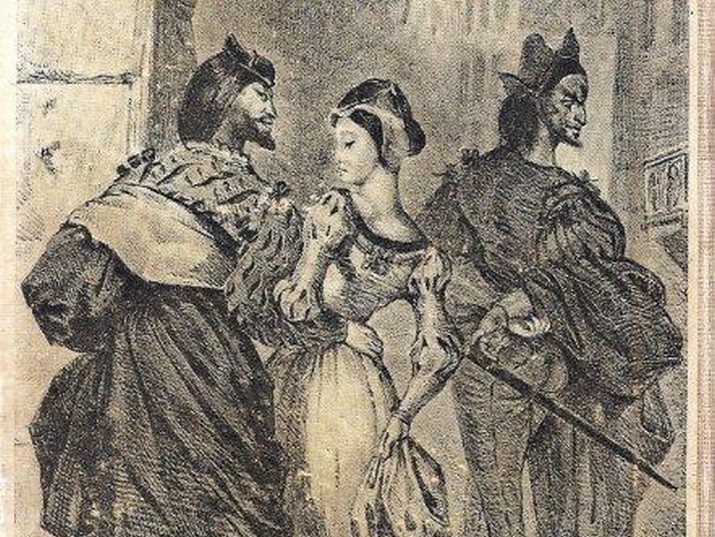 Johann Wolfgang von Goethe (1749-1832) is considered today one of the outstanding poets in the history of German literature. Goethe is known as the “national poet” of the German people, and throughout the generations, all of the students in the German schools encountered his works at one stage or another of their studies. Many households owned simple or elaborate editions of Goethe’s works, and until not long ago, many were able to recite the poems and ballads of this illustrious poet by heart.

The name of the small city of Weimar is closely tied to Goethe, who lived and worked there most of his life. The life there of the poet – who was also a lawyer, a statesman, and manager of the local theater – and his friendly relations with another key literary figure in German literature in that city – Friederich von Schiller – granted the city of Weimar the title “The Capital of German Classics.”

Goethe’s most famous work is the play Faust. While Goethe earned himself a reputation as a great poet already during his lifetime, mainly due to the novel The Sorrows of Young Werther, his glorious reputation, which endures to this day, stems from his monumental oeuvre, Faust. The poet worked on the play for more than 60 years, publishing it in different versions and ultimately, dividing it into two parts. The first part is considered more accessible than the second. Indeed, the first part of Faust has been staged hundreds over the generations, if not thousands of times, while the second part was produced much less, due to its complex content. To this day, the play is still performed (still mainly its first part) and movies have been made based on its famous plot.

The main character in the play is a middle-aged scholar, Heinrich Faust. Faust’s character is based on an historical figure named Johann Georg Faust, who was an alchemist, astrologer and fortune teller from the 16th century, to whom were attributed dark powers and connections with the devil.

This fabled connection led Goethe, apparently, to the key element in the story of Faust, which is the pact between the scholar and the devil himself. The starting point for the pact is the scholar’s frustration with his advanced age.

The frustration that he feels stems from his inability to understand aspects of philosophy and nature and grasp new connections in these realms. This desire symbolizes the unquenchable aspiration for additional knowledge that ultimately encounters limitations, and, on the other hand, the failure of the scholar to enjoy life in all its aspects. In this state Faust meets the devil, who is in relentless pursuit of human souls.

Faust accepts the devil’s offer to make a pact: in exchange for becoming acquainted with world, acquisition of knowledge, a deeper understanding and hedonism as a young and handsome man, Faust promises his soul to the devil on condition that he will be satisfied with what he experiences and even reach complete contentment.

In the first part of the play, Faust encounters the life of emotion and the soul through a young and beautiful woman named Marguerite. Their relationship ends in disaster from her perspective, since she murders the child she bears with Faust, and loses her sanity in prison. This explains why Goethe defined the play as a tragedy: the protagonist does not solve his problems, and serious damage results to those close to him. In the second part, Faust appears as a person operating within history and society, but he fails in this arena. At the end of this part, Faust envisions a human society that operates for the benefit of all, in which the needs of the individuals are attended to, but since this world has not materialized and Faust is still striving towards it, he does not ultimately lose to the devil, and the soul of the deceased scholar is spared.

The humanistic and philosophical content of Faust made an impression on many generations and had an influence on countless readers, since they were able to identify with the dilemmas of Faust, both as a sensitive person and a man of spirit. The critique of the political, social and religious phenomena of Goethe’s time contributed to the ongoing popularity of the work, one of the reasons for which being that these phenomena have not dissipated with time.

German-speaking Jews, like fellow German speakers, were enamored of Faust. German immigrants to Israel from the “fifth Aliyah” often carried volumes of Goethe’s works with them to Israel, in the attempt to retain something from their lost homeland, at least, at the cultural-linguistic level. A printed edition of the play “Faust” (or of all of Goethe’s writings) could be found in the personal libraries of many Jews. Already in the mid-19th century, a few of Goethe’s works had been translated into Hebrew, but in the 20th century, the interest grew considerably. It is therefore not surprising that in Israel, as well, a translation into Hebrew of the first part of Faust was published by the poet Yaakov Cohen (1881-1960). Surely surprising, however, is the date of publication: 1943, in the throes of WWII and the midst of the Holocaust.

In his introduction, Yaakov Cohen wrote about his hesitations and the difficulties in translating into Hebrew not only the language but also the intentions of the great poet. At the same time, Cohen did not relate at all to the particular problematic nature of publishing a classical work from the German literary canon at the beginning of the 1940s. While at the end of the introduction he mentioned that he had completed the translation a decade earlier (i.e. in the early 1930s), we today remain stupefied by its publication in 1943, of all years. Yaakov Cohen published his translation with Schocken, a publishing house whose German roots surely meant that they understood the significance of the matter. The result was a beautiful edition, with lithographs from 1827 by French Artist Eugéne Delacroix, who admired Goethe and his works. Thanks to this beautiful book, both in its content and its external form, one may say that during the darkest days, it was Jewish intellectuals who made the effort to preserve the humanistic values that had characterized Germany at other times.