Termination of Employment Letter to Ladislaus Farkas from Fritz Haber

Over 100 scientists were forced to leave large research institutes beginning in 1933, most due to their Jewish origins 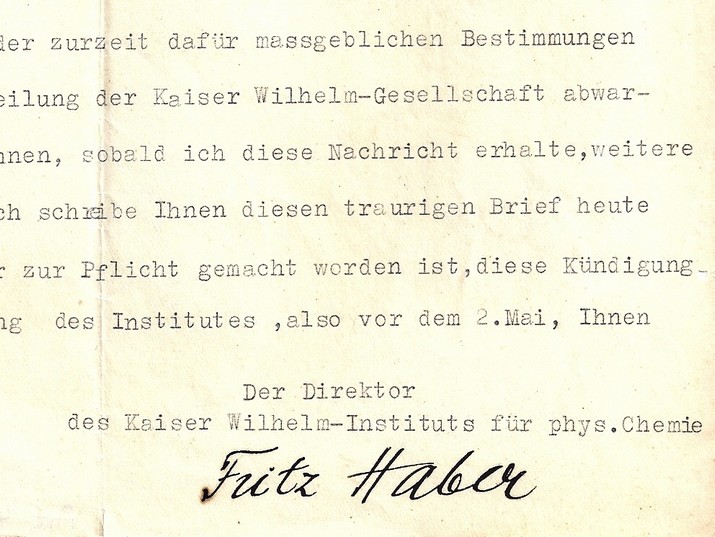 In 1911, the Kaiser Wilhelm Society for the support of scientific research was founded in Berlin. The goal of the society was to encourage research in various fields, mainly the natural sciences. As was the practice at that time, the society was named after the German Kaiser Wilhelm, patron of the initiative. Although Kaiser Wilhelm resigned in 1918 and left Germany, the society and its network of institutes continued to bear his name until after World War II. The first two institutes established were the institute for chemistry and the institute for physical chemistry and electrochemistry, both in Berlin.

The various research projects were usually financed through private donations, to no small degree from wealthy German Jews, while the state paid the researchers’ salaries. The researchers had the special privilege of investing all of their time in research alone, and were not required to teach in any academic institution.

Over the years, additional research institutes were established, ultimately totaling 28 different institutes, a substantial portion of which were in Berlin, but also in other German cities.

Many Jews were among the outstanding researchers in these institutes. Among the well known names were Albert Einstein, Karl Neuberg and Max Bergmann, but also Fritz Haber and Laudislaus Farkas. The story of these two scientists is an example of the fate of over 100 scientists who were forced to leave large research institutes beginning in 1933, most due to their Jewish origins, but also sometimes as a result of their political beliefs.

The first director of the institute for physical chemistry and electrochemistry was Jewish chemist Fritz Haber (1868-1934). While Haber was one of the most gifted scientists in his field, as a Jew, he was unable to advance in his academic career, and as a result, in 1892, he converted to Christianity. One of Haber’s great scientific achievements was discovering how to create ammonia through the synthesis of hydrogen and nitrogen, a discovery that was a breakthrough for the mass production of agricultural fertilizers, but also enabled the relatively simple production of explosives for military use. Following the discovery of nitrogen fixation, Haber won the Nobel Prize in chemistry in 1919, despite his more recent developments in the means of chemical warfare, which were widely used in the battles of World War I, as a result of which tens of thousands of British and French soldiers were killed. Haber’s wife, chemist Clara Immerwahr, could not make peace with her husband’s role in the development of these means of warfare in his institute in Berlin, and took her own life in 1915.

In the framework of the institute for physical chemistry and electrochemistry, Fritz Haber gave young and talented scientists a place to work and opportunities to conduct research in their fields. One was the chemist Laudislaus Farkas (1904-1948), descendant of a Jewish family from Hungary. In 1928, Farkas completed his studies in Berlin and immediately joined the staff of scientists in Haber’s institute. The talented scientist was greatly admired by the director of the institute.

Following the Nazi rise to power in January 1933, all members of the academic staffs of German academic institutions were fired already in the spring of that year. As director of the institute, Fritz Haber was forced to fire the Jewish researchers and other Jewish employees from their jobs. This can be seen from his letter of dismissal to Laudislaus Farkas on April 29, 1933. In the letter, whose tone is very personal, Haber expresses his deep regret that he is being forced to take such a step, and explains that he has no choice, given the new legislation. A day later, Haber met with the president of the Kaiser Wilhelm Society, physicist Max Planck, and submitted his resignation from the directorship of the institute. Planck tried to convince Haber to remain in his job, but Haber explained that under the new circumstances, he was unable to continue in his research, since his very work was affected by racist considerations. Haber left Germany. Already in 1933 he was appointed as a professor at Cambridge University in England, but the drastic change in his life led to a deterioration in his health, and the famous chemist died in January 1934 at a Swiss sanatorium.

Laudislaus Farkas also emigrated from Germany, initially to England, but in 1936 he was awarded a professorship at The Hebrew University of Jerusalem in physical chemistry. Under his influence, this field began to develop in Israel, and Farkas is considered the father of this science in Israel. On December 30, 1948, when Farkas was en route to a work trip in the United States, his airplane crashed over Italy, and the young scientist met his death. His personal archive is located in the archival collection of the National Library.