The placard states that this day was "the great day of the German people" and emphasizes that "every vote counts." 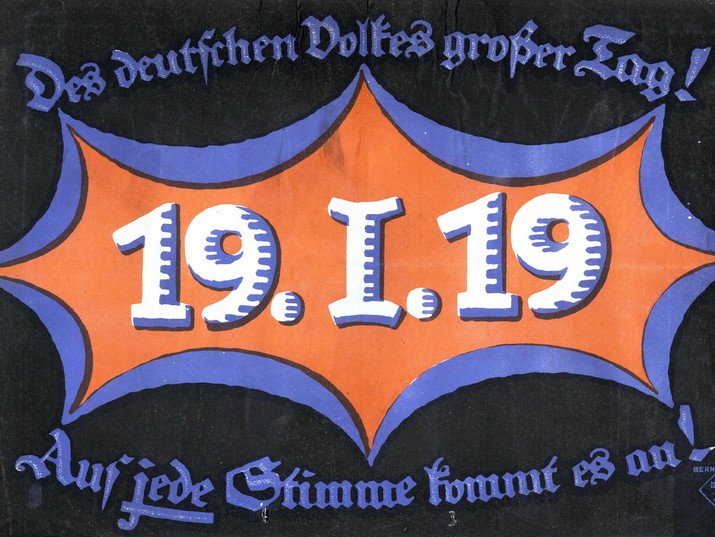 After the end of World War I, with the resignation of Kaiser Wilhelm II and the soldiers’ and workers’ revolution at the end of 1918, the temporary government agreed to hold general elections to establish a national assembly, a kind of preliminary parliament after the collapse of the Second Reich. The elections, set for January 19, 1919, were the first in which women in Germany were given the right to vote. The placard states that this day was “the great day of the German people” and emphasizes that “every vote counts.” Following the political-revolutionary riots in the German capital of Berlin, it was decided that the elected assembly would meet in Weimar, a small and quiet city, “the capital of classical culture,” located in the center of the country. On February 6, 1919, the delegates met for the first time and appointed Friedrich Ebert, representative of the Social Democratic party, as chancellor. Ebert in turn appointed the first government of the young republic. The city where the National Assembly convened was the origin of the informal name for the political entity: The Weimar Republic.

This placard was collected by the Jewish physician Arthur Czellitzer, who ran a private clinic in Berlin until the Nazis’ rise to power. Czellitzer was interested in various historical questions and in Jewish genealogy, but he also had a broad historical consciousness that manifested itself in the collection of announcements and posters he cultivated between 1918 and 1928. His collection contains hundreds of items relating to many political parties and candidates for various elections that took place during the Weimar Republic, and Czellitzer appears to have acquired the items in Berlin. In many cases, he added the date of acquisition and sometimes the location, filing his findings meticulously. In 1936, Czellitzer donated his collection to the National and University Library in Jerusalem. Dr. Arthur Czellitzer was murdered in the Holocaust, at the Sobibor Camp, in 1943.