Prices rose to absurd sums: at the end of the period of hyper-inflation, in the fall of 1923, a loaf of bread cost many billions and to send a single postcard from Munich to Prague required stamps worth 36 billion marks 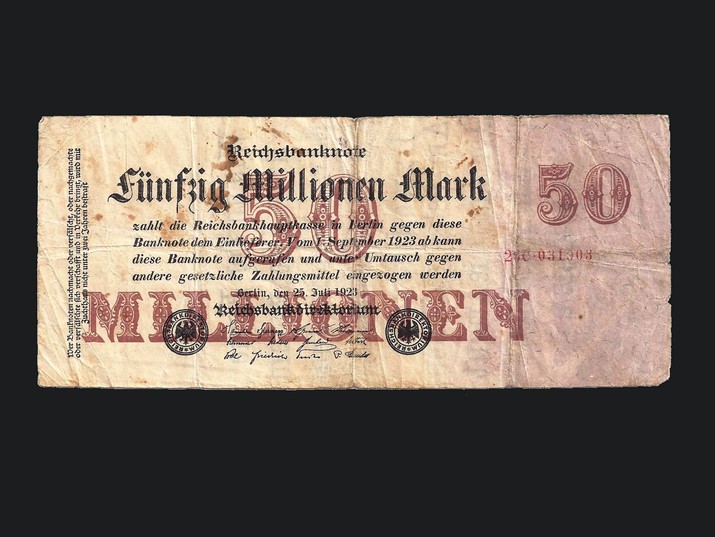 Inflation is the devaluation of a national currency due to a rise in the prices of commodities on the national market, often resulting from the rising price of imports. Mild inflation exists in every modern free economy, and is not considered a worrisome phenomenon, as long as it remains at a low rate. However, if, for political or economic reasons, inflation deviates from tolerable levels to the extent that it has a severe negative impact on the standard of living of many citizens, the phenomenon takes on the attributes of a socio-economic disaster, that also spurs a political disaster when the nation begins to seek individuals on whom to assign responsibility for the economic collapse.

The greatest inflation in the history of Germany occurred mainly from 1919-1923, but in fact it had already started in 1914, with the outbreak of WWI. When the war began, the German governments increased the money supply in order to cover the soaring costs, initially of the war itself, and afterwards, of the heavy reparations that the Allies had imposed on Germany in the Treaty of Versailles. One means of increasing the supply of money was the issue of war bonds purchased by many citizens. At the same time, it was decided to cut the linkage between the German mark and the price of gold, a connection that existed at the time in most advanced nations. The result was an expanding gap between the value of gold-based currency (the gold mark, which was actually in use until the end of the days of the German Empire) and paper currency, which could be printed in almost unlimited quantities. Flooding the market with printed money rapidly lowered its value, so that the prices rose disproportionately, while the real wage of salaried workers fell sharply. At the same time, loans and debts lost their value by the same proportion. This was precisely the goal of the German government after the end of the war: to lessen the burden of the reparations and to demonstrate the weakness of the German economy to the allies. 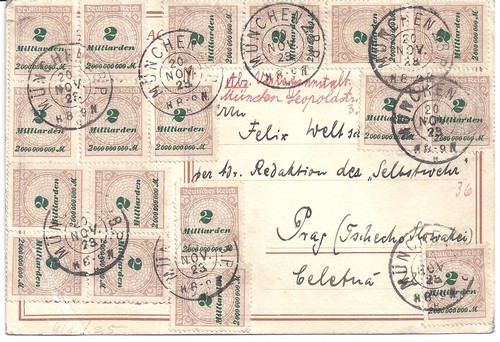 This situation took its toll on the daily life of most citizens. The rise in prices that the consumer was required to pay was not matched by a rise in wages. Since wages rose more gradually, it was more difficult to keep up with the high prices. On payday, employees hurried to reach the stores before the exchange rate of the mark vis-à-vis the dollar which was usually even lower than it had been a few days earlier. Prices rose to absurd sums: at the end of the period of hyper-inflation, in the fall of 1923, a loaf of bread cost many billions and to send a single postcard from Munich to Prague required stamps worth 36 billion marks (see photo). In such a situation, the central bank ceased investing in the design of bills and in their printed elements since it was not worthwhile to produce counterfeit bills, all of the graphic markings that were meant to serve as obstacles to counterfeiting, and some bills were even only one-sided. Often, a denomination – higher than the specified original bills – was overlaid onto existing bills that had not yet entered the money cycle. There are photographs depicting children who had cut out kites from galley sheets of bills that had become obsolete.

In November 1923, the inflation reached a peak: one dollar was worth 4,200 billion German marks. It was clear to all that this trend could not go on. Eventually, a change of government in Germany brought an end to the inflation, after it had achieved one of its main goals: reduction of the debts that were burdening the German coffers. From November 15, 1923, the currency was replaced: instead of the worthless Papiermark, the Central Bank of Germany presented the new mark (Rentermark). In the international arena, the German government reached an understanding with the Allies in the framework of the Dawes Plan, according to which German reparations were adjusted to the country’s economic ability. Following this, the German economy recuperated over the coming years, but millions of citizens lost their capital, which had been deposited in savings plans.

Our display item shows a 50 million mark bill, part of the Means of Payment and Banknotes Collection of the Archives Department of the National Library. This bill was issued in July 1923, just a few months before the inflation peaked. Based on this bill’s physical condition we can conclude that it was heavily used. Originally, the reverse side of the bill was left blank, but in our sample, an informal nationalist, anti-Semitic printing was scrawled on. As in many moments of crisis throughout history, the period of inflation was a time to cast blame for the eradication of private wealth: the anti-Semites were convinced that the “rich Jews” bore all of the responsibility.

Translation of the rhymed lines: