Albert Ballin, the HAPAG Shipping Company, and the Immigrants to America

Home > Germany the Jews and Israel > Albert Ballin, the HAPAG Shipping Company, and the Immigrants to America
Diaspora

In 1886, a young man named Albert Ballin (1857-1918) of Jewish origins joined the company. Ballin had inherited from his father an emigration agency that operated in Hamburg. The agency helped European emigrants obtain tickets for sailing from the various European ports to America. 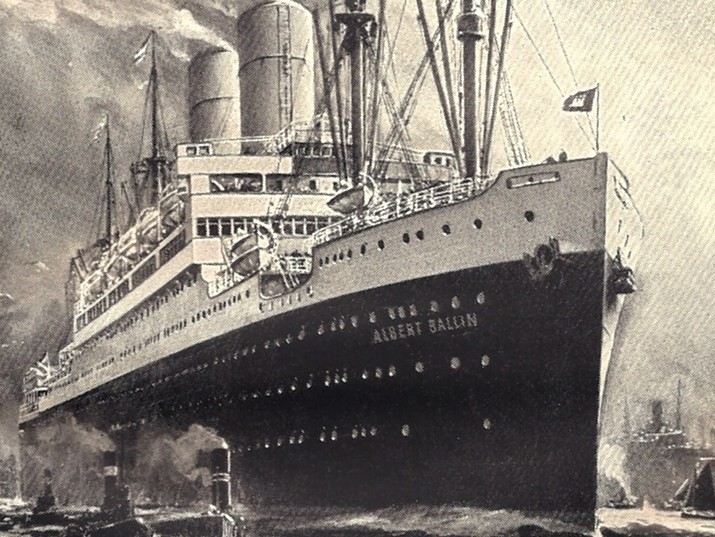 ​In 1847 in the city of Hamburg, a new shipping company named HAPAG was founded.

One of the names the company was known by was the “Hamburg-America Line”. This name explains the objective of the company, which operated between Germany and American ports, and aimed its activity at a defined target population, the many emigrants who were en route from Europe to America. In the mid-19th century, emigration to the United States and other American countries was the solution for many people who did not manage to find their place in Europe for both financial and political reasons.

Initially, the HAPAG company operated sailboats, but over the years, it also purchased shipping vessels that were modern relative to the times: steamships. The company was moderately successful, but had to grapple with tough competition from other shipping companies from Germany, England, Belgium and Holland, all of which specialized in the emigration market. Only at a later stage did the company begin dealing in freight shipping to a significant degree.

In 1886, a young man named Albert Ballin (1857-1918) of Jewish origins joined the company. Ballin had inherited from his father an emigration agency that operated in Hamburg. The agency helped European emigrants obtain tickets for sailing from the various European ports to America. Ballin’s addition to the company was a most important move for HAPAG. From the beginning of his tenure there, Ballin was in charge of the topic of passengers. He fulfilled his role with such great success that already two years later, he was appointed to the board of directors, and from 1899, he served as CEO of the company.

Under his influence, the company ordered large, high-speed ships that offered emigrants many spaces at convenient prices, on a large number of decks. The response of the emigrants was so overwhelming that in 1900, on one of the islands in the Elbe River (which flows through Hamburg) a “city of emigrants” was established, where travelers could wait in good conditions and in a clean environment until setting sail for America. This success, joined by burgeoning success in the realm of cargo shipping, led to the company’s ongoing growth, so that on the eve of WWI, it was the largest shipping company in the world, with 175 ships and more than 20,000 employees. Competition with other companies led to orders for newer and larger ships, and on a number of occasions, the company was the largest shipping operator in the world (until other companies purchased larger ships). In 1914, HAPAG purchased three giant steamships, each of which had a capacity of 4,000 passengers. Two of them entered into regular service between Hamburg and New York, but the construction of the third was aborted, and due to the outbreak of the war, it never set sail under the company flag. The company’s slogan was “The world is our field” (Unser Feld ist die Welt). Between the years 1850-1935, some 5,000,000​ people emigrated from Hamburg, and among them, many Eastern European Jews. A large number of them made the journey with HAPAG.

Albert Ballin served as CEO of the company for 19 years. Its growth during these years was thanks to his efforts, but also due to the support he received from the German political elite. The last Kaiser, Wilhelm II, was very excited by the realm of shipping, particularly large ships, which also took shape in the construction of many warships during that period.

Despite his Jewish origins, Ballin, who never converted to Christianity, was highly admired by Kaiser Wilhelm II, and became one of his unofficial Jewish advisors (together with Emil and Walter Rathenau, James Simon and others). Albert Ballin defined himself as a loyal German citizen in every way, and left a strong imprint on German politics. Evidence of this appears in the letter displayed here, written by Ballin in 1916 to an acquaintance in Vienna, Dr. Georg Halpern, one of the Zionist leaders of the period. In the letter, Ballin takes a stand on political developments in Poland an on World War I. The fact that Ballin corresponded with a Zionist leader is surprising from a number of aspects, including in light of the end met by HAPAG’s CEO, who took his own life on November 9, 1918, on the day of Kaiser Wilhelm II’s abdication. The collapse of the Reich, together with the defeat of Germany in the war, broke Albert Ballin and caused a demoralizing crisis in his system of values. The suicide spared him from witnessing the dismantling of the company’s fleet, when Germany was forced to pay reparations to the Allies. And yet, the company continued to exist, and rehabilitated itself in the days of the Weimar Republic. After the end of WWII, almost all of its ships were again confiscated, but the HAPAG company gain rebounded, and it continues to be in operation to this day.