Home > Haggadah > Forget Google Maps! To Get Out of Egypt, These Are the Maps You Need!
Judaism

The National Library is in possession of many antique, rare and illustrated maps tracing the epic journey of the People of Israel through the wilderness. 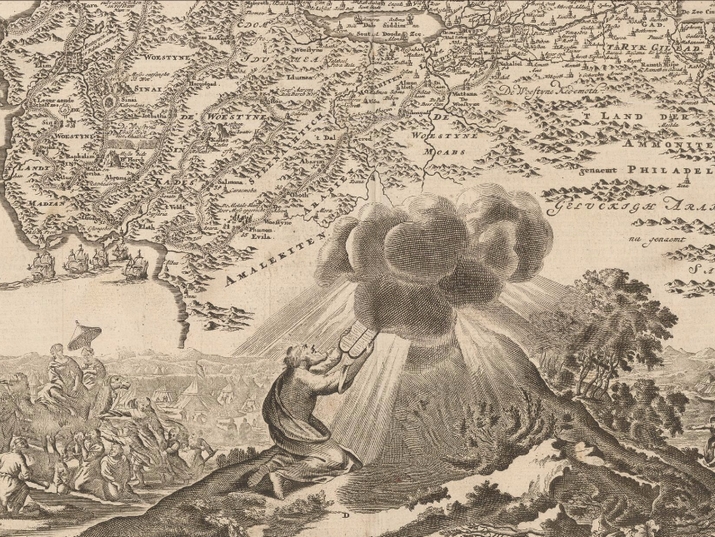 If it so happens that in the future, we find ourselves in need of executing another Exodus from Egypt, the good news is: we will be prepared! We shall have a map! In fact, the Eran Laor Cartographic Collection at the National Library has an assortment of old, rare and imaginatively illustrated maps which trace the mythical and defining journey of the People of Israel through the desert.

Since there is no accurate record of the points along the route of the Israelite Exodus, the maps can only show an approximate or imagined one. The path they traversed in the desert is not the only thing the maps show – many are accompanied by illustrations in which the artists offered their versions and interpretations of various aspects of the biblical story. The maps in our collection do not strive for geographic accuracy but rather emphasize the religious narrative. Therefore, the maps incorporate detailed depictions of figures and events to illustrate and enliven the well-known Exodus story.

Out of Egypt by Way of London 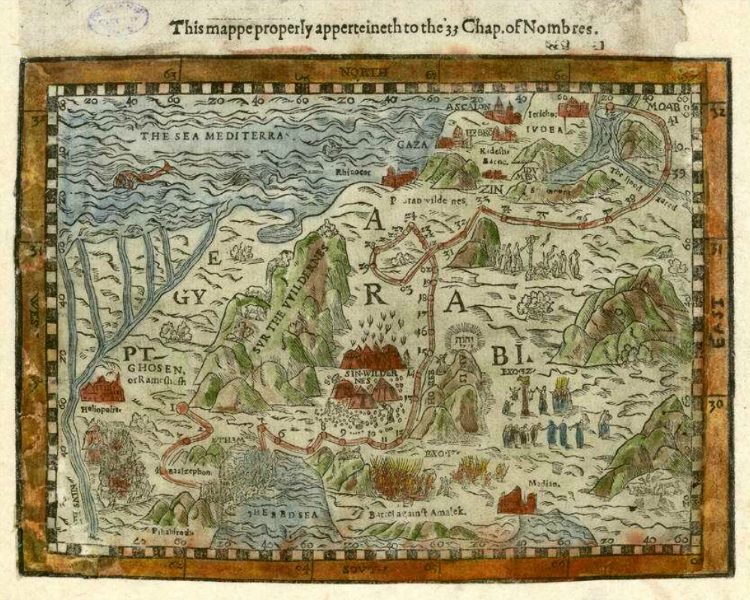 With the development of print, publishers began to attach maps to copies of the printed bible. These were often descriptive maps of the Garden of Eden, the Promised Land and its division among the tribes, Jesus’ wanderings, and of course the Exodus from Egypt.

This map of the Exodus, was added to the Book of Numbers in a bible published by Richard Harrison (London, 1562). The map shows the route the Israelites followed through the wilderness, including 42 various stops along the way. Along the route we see the Israelites crossing the Red Sea with the Egyptians in chariots and on horses chasing after them, the Israelites battling the Amalekites, gathering the manna from Heaven, dancing around the Golden Calf at the foot of Mount Sinai during the revelation of the name of God – indicated with Hebrew letters (י-ה-ו-ה), and Moses with the copper snake. On the left we see the Nile delta and the land of Goshen, and in the upper right are Moab and various other ancient and biblical cities, including Kadesh Barnea, Jericho and Hebron.

A Special Map for the Amsterdam Haggadah 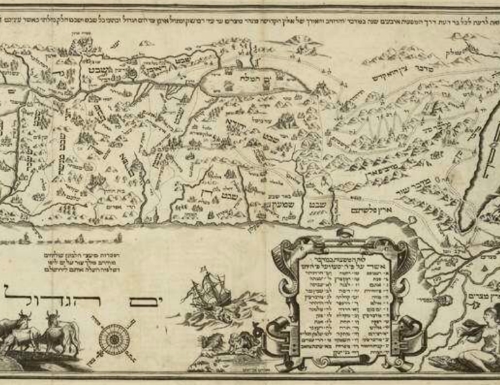 Less than one hundred and fifty years later, in 1695, Abraham Bar Yaakov, a Protestant priest from Germany who converted to Judaism and worked as an engraver in Amsterdam created a map for the Amsterdam Haggadah.  This is, in fact, not only a map of the Exodus, but a map of the entire Promised Land, of which only the right half is dedicated to the Exodus. The route of the Exodus includes a number of small illustrations which depict the falling of the manna, Mount Sinai and the revelation of the name of God, and the altar with the twelve precious stones east of Jericho. There is also a key listing the places where the Israelites stopped along the way.

In creating the map for the Amsterdam Haggadah, Abraham Bar Yaakov was influenced by other contemporary maps made by Christians, and of course his own familiarity with Christianity and knowledge of Latin was useful. There is a striking similarity between his map and a map prepared by Hondius Jansson who himself used a map made in 1633 by Christian van Adrichom as a model. One can see that the route of the Exodus from Egypt, the tiny illustrations, and even the storm-tossed ship in the sea and the figure of Jonah being thrown from it, are all derived from that map.

However, Bar Yaakov also introduced important changes in his map. In the lower right corner is the figure of a nude woman on a crocodile, which in the Middle Ages and early modern period symbolized the continent of Africa. In medieval literature, the crocodile was used to symbolize Egypt. In a sense, Bar Yaakov “converted” Jansson’s older map to create his: he changed the fleet of ships into the barges of King Hiram transporting the cedars of Lebanon for the building of the Temple, and at the lower left, the Promised Land is represented as the Land of Milk and Honey, with a herd of cows and next to it the Hebrew word for “milk” (חלב, chalav) and beehives with the Hebrew word for “honey” (דבש, dvash). The eagle nearby is accompanied by the verse “You have seen what I did to the Egyptians, and [how] I bore you on eagles’ wings, and I brought you to Me,” stressing the map’s main motif of the Exodus from Egypt.

A Comic Book Version of the Priestly Ritual in the Tabernacle 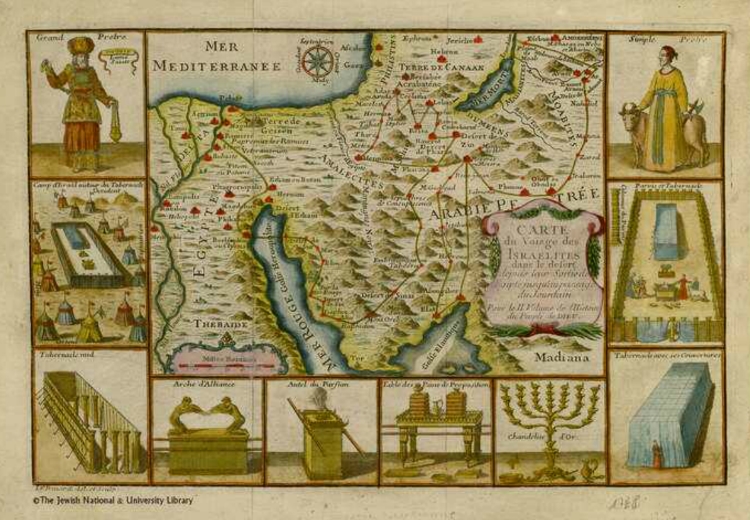 This map printed in Paris in 1738 by Jacques Francois Brand was also dedicated to the journey of the Israelites through the wilderness. The route and various stops along it are marked in red and around them are a series of illustrations connected to the priestly work in the Tabernacle and its vessels. These pictures were intended to illustrate the worship in the Tabernacle at the encampments along the wilderness journey, and it is possible to identify the following (counter-clockwise): the high priest, the tabernacle and the surrounding camps, the tent of meeting, the ark and the cherubim, the altar, the table of the showbread (Lechem Ha’Panim), the candelabrum (the Menorah), the covered tabernacle (the Mishkan), the high priest performing a sacrifice inside the tabernacle, and an ordinary priest with a sacrificial bull.

And here are several more maps depicting the Exodus from Egypt: 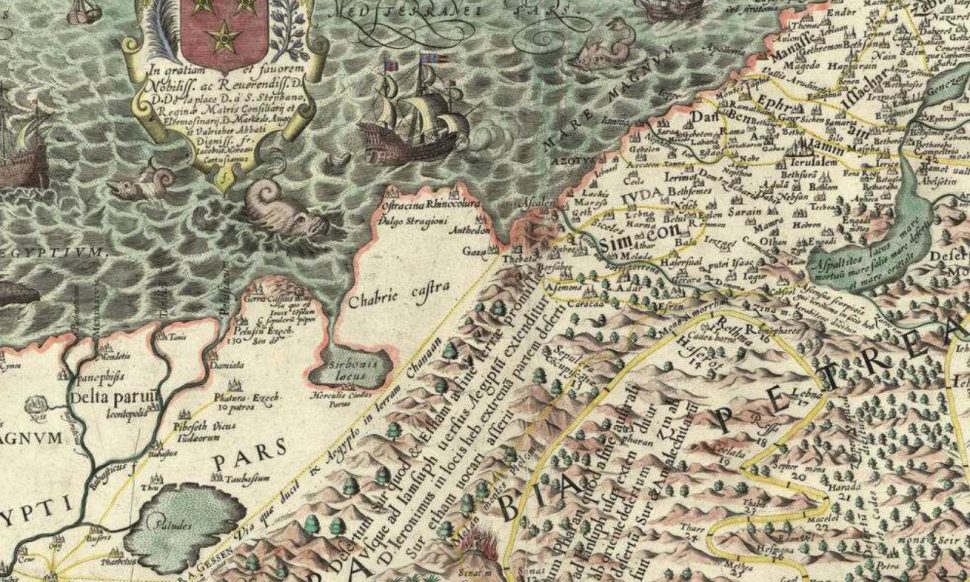 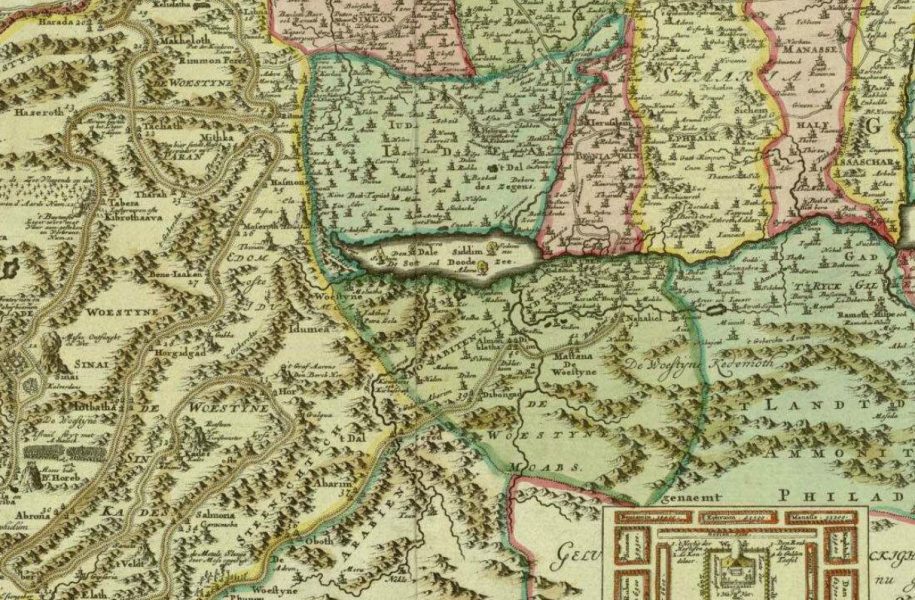 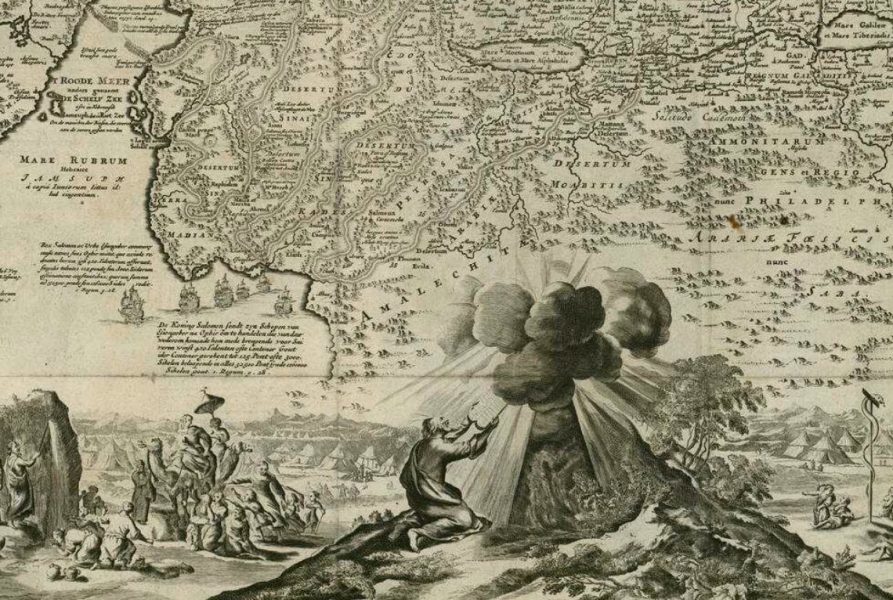 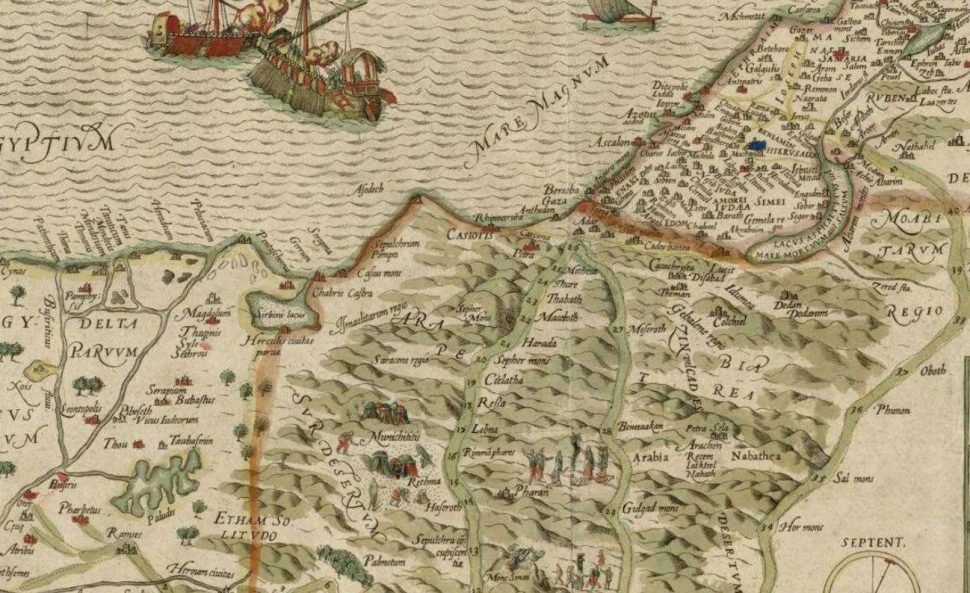 You can view many more maps of all types from the Eran Laor Cartographic Collection at the National Library of Israel, here.