When Dr. Irving Halperin wrote to David Ben-Gurion in the summer of 1968, the response contained a few surprising anecdotes about the Jewish State's first prime minister. 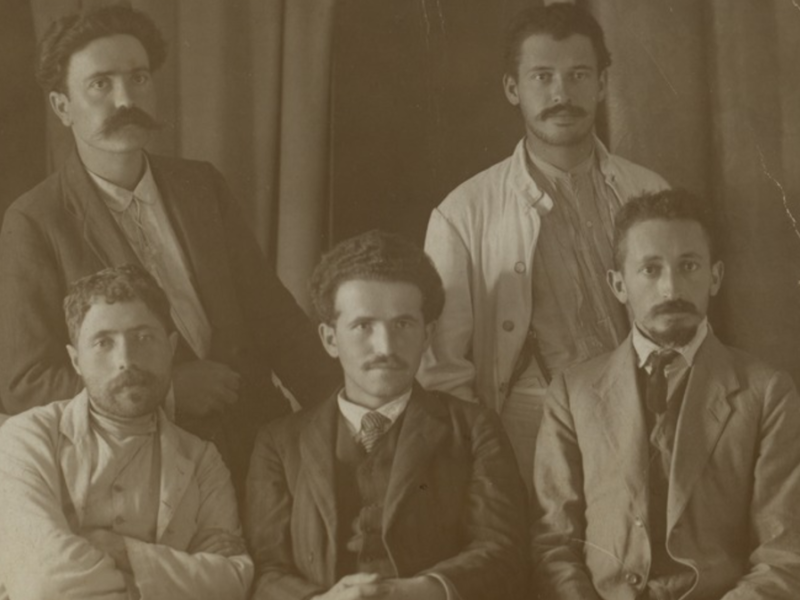 I have long been an ‘invisible’ fan of yours.

The United States was in turmoil. Protestors and public displays of affection filled the streets, new music filled the airwaves.

For many, San Francisco was the epicenter of it all. San Francisco State College, where Dr. Irving Halperin taught English, had seen violence, mass protests, arrests of students and faculty. It was soon to be the site of the longest student strike in American academic history.

Nonetheless, in the letter Dr. Halperin writes in English to Israel’s first prime minister, he makes no mention of what is going on around him.

Halperin, a middle-aged Jewish academic, simply wanted to know about the past, about the “Second Aliyah” period some six decades earlier during which Ben-Gurion made Ottoman Palestine his home.

In the last four months I was terribly busy and beg to apologize for not answering your letter of August 14th until now.

On September 18th, David Ben-Gurion handwrote his response in English from the humbly isolated confines of Kibbutz Sdeh-Boker in the Negev Desert. Israel’s 82-year-old founding father was embarrassed that it had taken him so long to get back to a man in California whom he had never met.

Halperin had asked Ben-Gurion to recommend “documentary material” and “works of literature” that would help him write a book about “the day-to-day life in Israel of Second Aliyah settlers”. He wanted “a palpable grasp of where they worked, how they lived, what they ate, how they saw the challenges of the land, how they suffered, etc.” As an afterthought, Halperin had jotted “in English” on the page’s margin, connecting it to the typed word “literature” in order to make it clear that Hebrew sources would be of no use to him.

In his response, Ben-Gurion first suggests reading  ספר העליה השניה (The Book of the Second Aliyah), a Hebrew collection of essays and personal accounts related to the period. Then, in first person, he offers this stranger from across the globe an intimate account (in English) of his earliest experiences in the Land of Israel:

I will describe my life when I worked a year in Petah-Tikva 62 years ago, and in Sejera 60 years ago. In P.T.: It was not easy to get work every day, as our colonists preferred Arab Labor. I worked 8 hours a day when I got work. I received 8 piasters a day, worked 8 hours a day. I could not work every day, either because I couldn’t get work or because I suffered from malaria. On the average I worked 10 day [sic] in a month.

Ben-Gurion’s father, himself an ardent and active Zionist who had once written to none other than Theodor Herzl to ask for advice about young David’s education, could not bear reading of his son’s miserable condition. He had even unsuccessfully invited his son back to Plonsk and sent him some money to help ease the situation:

When my father learnt that I suffer [sic] from malaria and hunger, he asked me in a letter to come home. I replied that my Home is in Israel. Then he sent me money. I returned the money.

After suffering through malaria, hunger and a measly 8 piasters a day, Ben-Gurion moved up to the settlement of Sejera in the Galilee, where, “I had permanent work and although my monthly salary was only 30 francs, I was quite happy.”

Intimating that a personal handwritten account from Israel’s founding father was of marginal importance, Ben-Gurion closes his letter to Halperin with “But try to get the book ‘ספר העליה השניה'” (“The Book of the Second Migration Wave”) – a simple recommendationm, and perhaps a not-so-subtle admonition to learn Hebrew. from an aging statesman in the Israeli desert to “an ‘invisible’ fan” across the world. 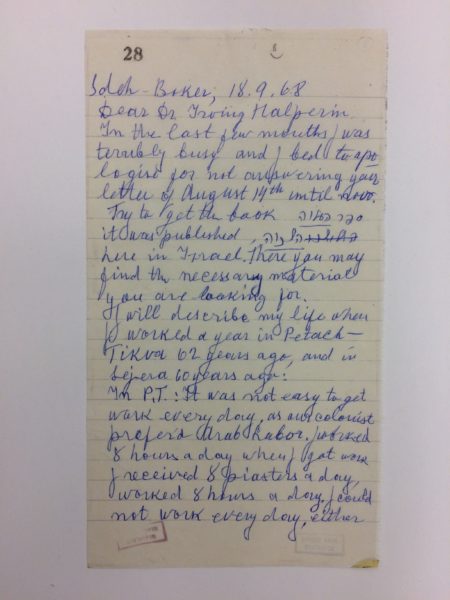 Special thanks to Leanna Feldman of the Ben-Gurion Archives at Ben-Gurion University of the Negev, Daniel Lipson and Chen Malul of the National Library of Israel for their assistance and insights.