A rare miniature bible with a dedication to President George Washington was acquired last year as part of famed Valmadonna Trust Library. 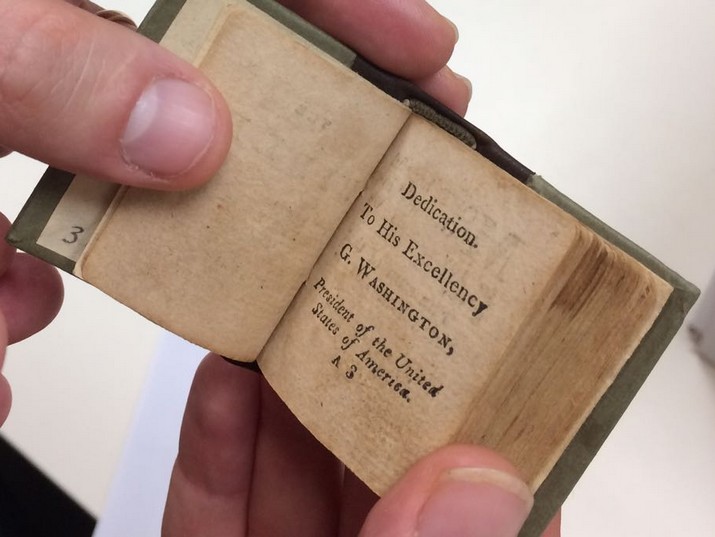 Some two centuries after it was published, a rare miniature bible dedicated to “His Excellency G. Washington” has come to Jerusalem, where the National Library of Israel has made it freely accessible online for the first time. According to experts, less than a dozen copies of this edition remain in public hands.

“The term ‘thumb bible’ refers to abbreviated bibles like this, which were popular in early 19th century America, where they were used to educate children,” says Dr. Aviad Stollman, Head of Collections at the National Library of Israel. The paraphrased biblical text appearing in this edition was originally written by John Taylor, a well-known 16th-17th century English poet.

The book includes a number of crude early American woodcuts depicting Biblical scenes and figures. It was printed in Rutland, Vermont sometime between 1813 and 1815.

The full dedication reads: “To his Excellency G. Washington, President of the United States of America. Most hopeful George, into thy hands we give, The sum of that which makes us ever live. And tho’ the volume and the work be small, Yet it contains the sum of all in all.”

The George Washington Thumb Bible came to the National Library of Israel as part of the famed Valmadonna Trust Library, the finest private collection of Hebrew books and manuscripts in the world, which was purchased jointly by NLI and Archaeology, Books and Judaica collectors Dr. David and Jemima Jeselsohn through a private sale arranged by Sotheby’s.

The Valmadonna collection is currently being digitized and it will be showcased in the National Library of Israel’s landmark new building, designed by award-winning architects Herzog & de Meuron, and currently under construction in Jerusalem.

The digitized George Washington Thumb Bible may be viewed here in its entirety.

The Scholar who Changed the Morning Blessing

The Little Book of Psalms that Survived the Soviet Prison