When Israeli Citizens Acquired Tanks for the IDF

In 1955, amidst rumors about a weapons deal between Czechoslovakia and Egypt, the Israeli government decided to once again employ the familiar Israeli pioneering spirit and camaraderie and to make an unconventional appeal to its citizens. 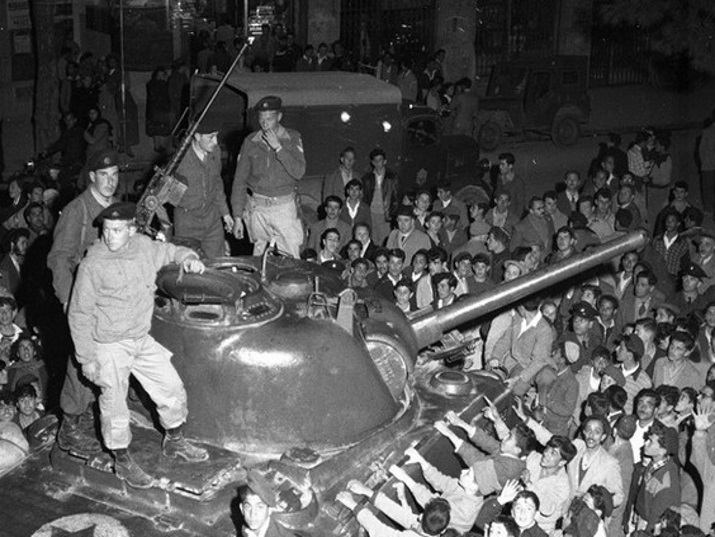 As soon as the leadership of the State of Israel became aware of the gargantuan arms deal occurring between Czechoslovakia and Egypt in 1955, they rushed in search of resources that would fund new weapons.

Picture it like this: A young country (barely 7 years old), bravely fighting to establish itself on the international stage, all the while absorbing enormous waves of immigrants that more than doubled its population, and developing the desolate swaths of desert it contains.

In addition, Israel was attempting to persuade other countries to warm up relations and adopt the fledgling state as a new strategic ally.

If that doesn’t make your head spin, consider how one would feel if they heard on the radio that a colossal arms deal had been signed between and a former partner that assisted you significantly in the War of Independence. And by the way, this neighbor would occasionally voice terrifying threats about your future. 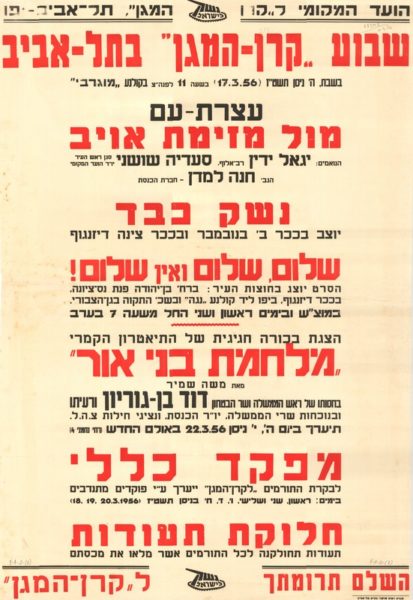 ‘A national rally in the face of the enemy plot’ in Tel Aviv-Jaffa, a poster for donations to the Defense Fund

This is precisely the situation the brand new State of Israel found itself in in March 1955, when its leaders discovered the enormous arms deal Egypt had signed with Czechoslovakia. “The second round” the Arab countries had promised Israel after its victory in the War of Independence went from being a threat to a promise.

The above was the backdrop of the Israeli government’s decision to once again employ the famous Israeli pioneering spirit and camaraderie, and to make an unconventional appeal to its citizens: help us purchase new and superior equipment for the IDF. 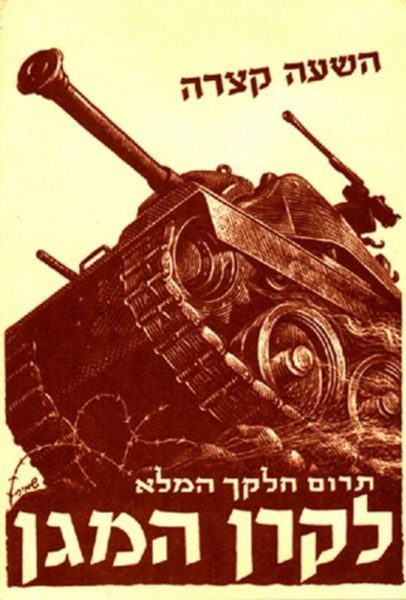 Time is short, rush to donate to the Defense Fund! A poster from the Shamir Brothers Collection

This grassroots operation was given the name “Keren Magen” [Defense Fund]. Dozens of posters and notices were distributed throughout the county. The poet Haim Hefer wrote the appropriately titled song “Totachim Bimkom Garbaim“[Canons Instead of Socks] for the Nachal choir. 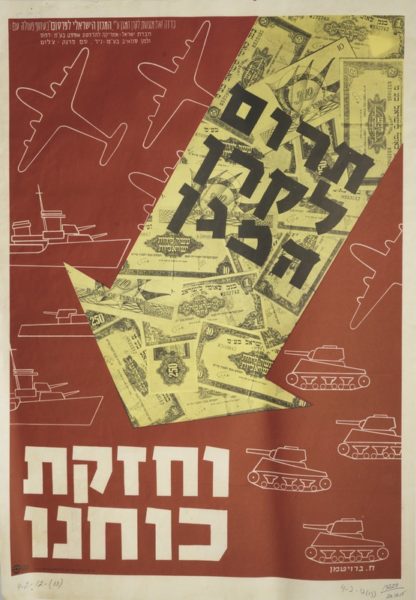 Rush to donate to the Defense Fund. A poster from the Tel Aviv Municipality Collection

Between autumn of 1955 and spring of 1956 the Israeli public donated en masse: the Netanya Municipality collected money from its citizens for a combat airplane which was going to be named “Netanya 1”, the Haifa Municipality funded a fleet of torpedo boats from its residents’ donations and Ramat Gan decided to purchase a cargo aircraft and 100 parachutes for Battalion 890. 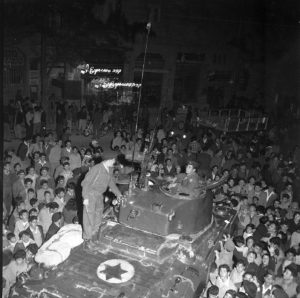 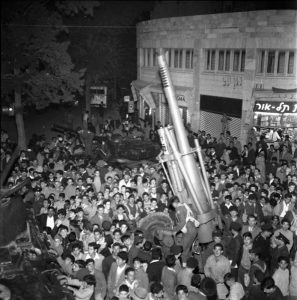 No, you are not looking at a hostile civilian commandeering of IDF weaponry, but a military parade in King George Street in Jerusalem in support of “Defense Fund”. Photographs from the Eddie Hirschbein Collection in the National Library

It wasn’t just cities that donated to the acquisition efforts: the professional soldiers donated towards the purchase of two airplanes out of their wages, the National Kibbutz Movement and the Shomer Hazair movement jointly purchased two combat planes. The Union of Laborers made do with purchasing one airplane. Even commercial companies joined the effort: the Discount Bank and Bank HaPoalim each purchased a tank. 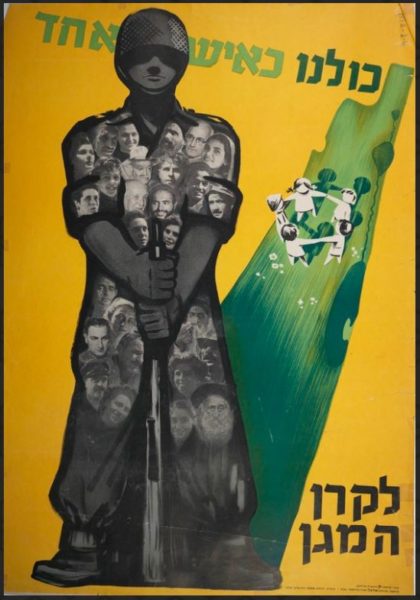 We are all united for the Defense Fund. A poster from the Tel Aviv Municipality Collection

Throughout the country, teachers, laborers, children, moshavim and kibbutzim, pupils and students joined the effort, and in reality the entire Jewish people donated money, equipment and sometimes even jewelry and other valuables. In the spirit of recruitment and of the times, the President’s wife, Rachel Yanait Ben Zvi called for bereaved parents of soldiers who had been killed in the War of Independence to donate their compensation payments to the “Defense Fund” in memory of their dear ones. 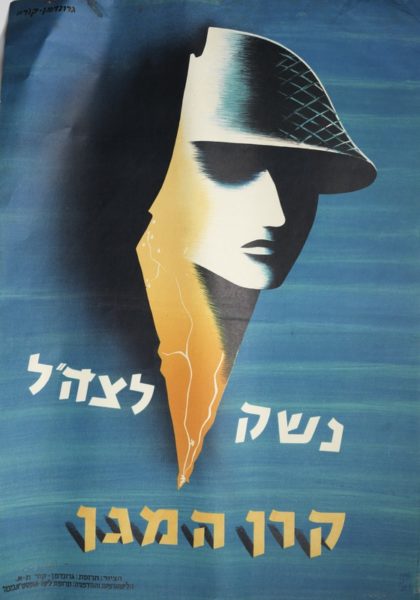 Arms for the IDF – Defense Fund. A poster from the Tel Aviv Municipality Collection 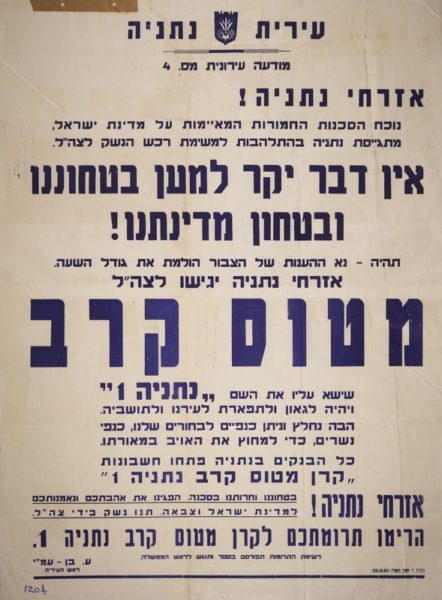 “Residents of Netanya! Donate to the “Netanya 1” Airplane. A poster from the National Library’s ephemera collection