The fascinating series of photographs documents ceremonies and traditions, some of which no longer exist in mainstream Judaism. 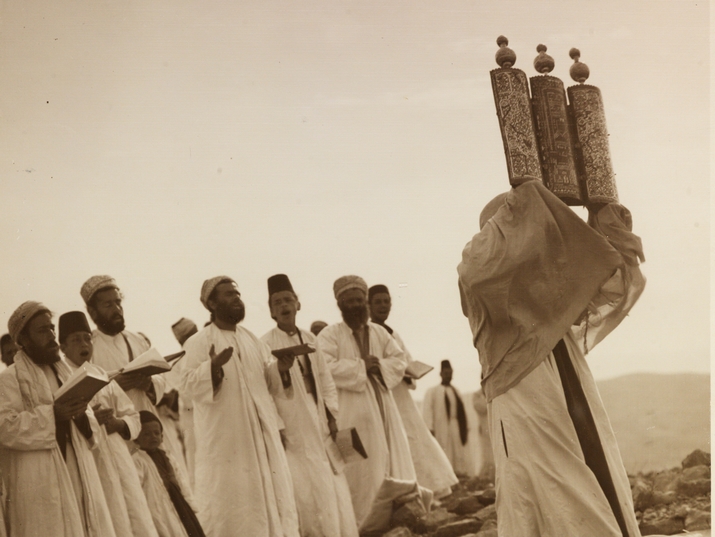 Like the majority of ancient nations, the truth regarding the origins of the Samaritan sect is lost in the mists of time. Samaritan tradition claims that the members of the sect are the Shomrim [guards] – the guardians of the true Torah who refused to accept what they saw as the false Jewish version, which considers Mount Moriah in Jerusalem as the holiest site in the Jewish faith and which was traditionally compiled during the Second Temple period.

According to this tradition, only the Samaritans – “the true Israelites” – live according to God’s law. This is because they sanctified Mount Gerizim, the sites of the temporary alter built by Joshua when the Israelites people entered the promised land, and built their temple there. 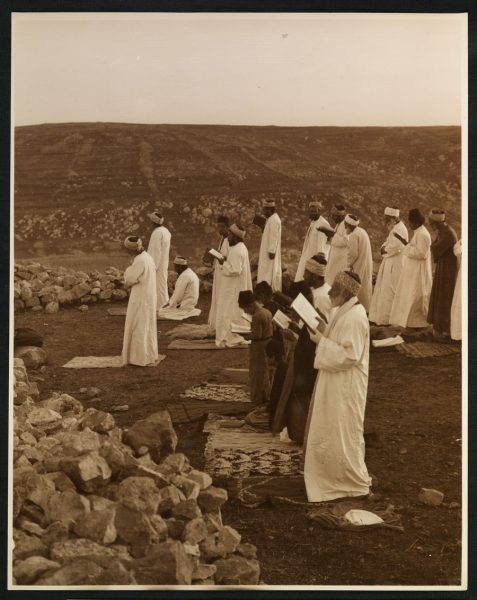 The book of Kings II 17:24, the most ancient source containing information about the origins of the Samaritans, presents a different version:

“And the king of Assyria brought [people] from Babylonia and from Cuthah and from Avva and from Hamath and from Sepharvaim, and he settled them in the cities of Samaria instead of the children of Israel, and they took possession of Samaria and dwelt in its cities.” 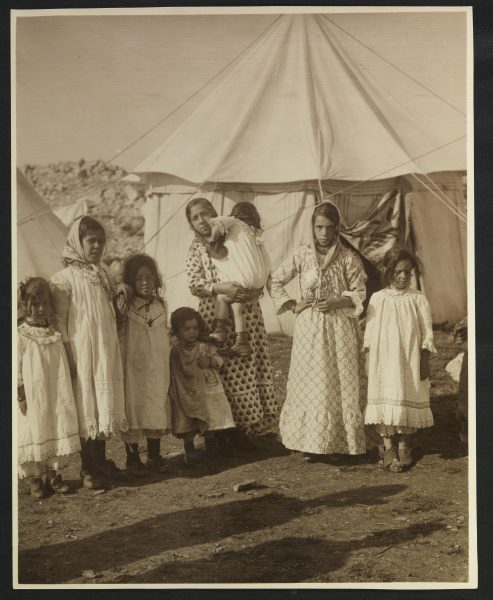 Based on this source, the Jews believe the Samaritans do not originate from the ancient Hebrews who were faithful to the original tradition concerning Mount Gerizim, but rather from a considerably later period. In their opinion, the Samaritans originate from nations brought by Esarhaddon king of Assyria, son of Sennacherib (who ruled between 681-669 BCE) to Samaria to take the place of the ‘ten lost tribes’. According to the book of Kings, the new settlers began to worship the God of Israel out of fear of the lions God sent against them (Kings II 17:26) and were therefore also referred to as ‘lion converts’. This is also the reason why the Jews who returned from Babylonia to the Land of Israel in the period of Cyrus refused to allow the Samaritans to help them rebuild their destroyed Temple.

Over time the two groups became so detached that the Samaritans, who branched off from the Jewish people over a thousand years ago, have their own version of the Torah, which they refer to as Sefer Abisha. The Samaritans do not accept the books of Nevi’im (“Prophets”) and Ketuvim (“Writings”), only the Torah, and they continue to use an ancient script known as Daatz. They similarly reject the Oral Torah. 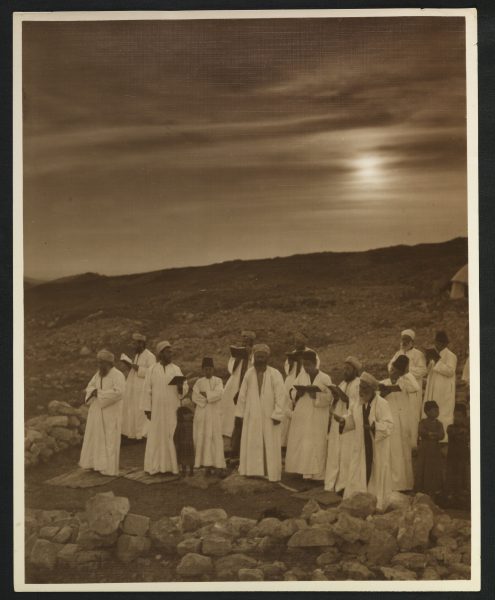 Researchers who compared the traditional wording (that accepted by Jews) of the Torah and Sefer Abisha found some 6000 differences between the two versions. The majority stem from differences in spelling but others relate to the crux of the dispute between the two nations. The most prominent example is the question of the precise location of the holy place chosen by God.

“And it will be, that the place the Lord, your God, will choose in which to establish His Name there you shall bring all that I am commanding you: Your burnt offerings, and your sacrifices, your tithes, and the separation by your hand, and the choice of vows which you will vow to the Lord.” (Deuteronomy 12:11) 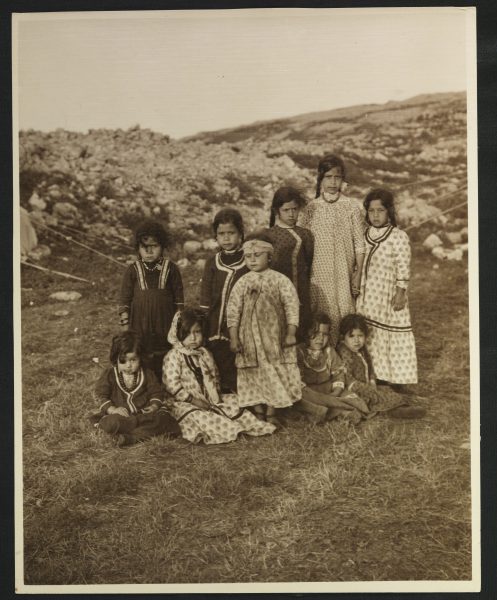 By the beginning of the 20th century the sect had only a hundred and fifty adherents and Western travelers who toured through Israel at the time predicted their impending demise. Despite this, the sect continued to cling to its holy sites and to hold its traditional ceremonies, including the ceremony of the Passover sacrifice on Mount Gerizim as in the days of old. The renewed interest of the Western world in the history of the sect and later the establishment of the State of Israel improved its social and economic standing. Due to this, the tiny sect expanded, and currently consists of eight hundred members some of whom live in the city of Holon and some who continue to live in Nablus, adjacent to their holy mountain.

A rare photograph album preserved in the National Library of Israel offers a rare glimpse into one of the most important of the Samaritan customs – the pilgrimage to Mount Gerizim on the festival of Passover.

We are unable to determine the precise year the photographs were taken, but it appears to be a ceremony held in the early 20th century, no later than 1911, the year of the death of the tour guide Rolla Floyd whose name appears on one of the tents in the photographs.

The Samaritans are commanded to go on a pilgrimage to the holy mountain on three different festivals – Passover, Shavuot and Sukkot. The pilgrimage on Passover is considered the most significant, a fact clearly seen in the photographs themselves.

The pilgrimage to Mount Gerizim is conducted as a journey infused with grandeur and holiness, during which the worshipers recite a series of special prayers. 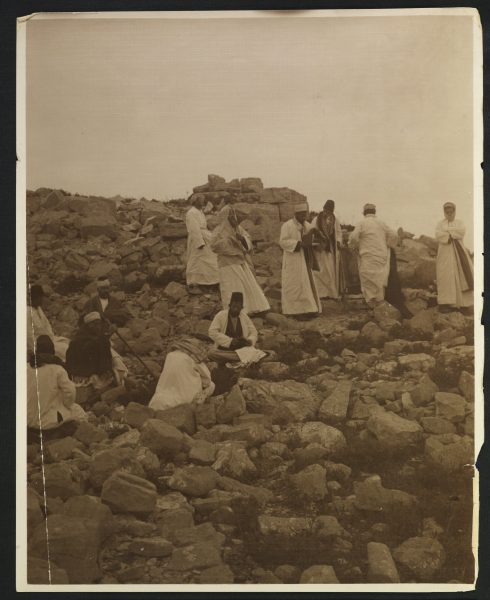 After ascending to the holy mountain, the sacrifices must be prepared. In the photograph we see young boys in the camp of tents established on Mount Gerizim at the foot of the alter together with the sheep brought to be used as a Passover offering. 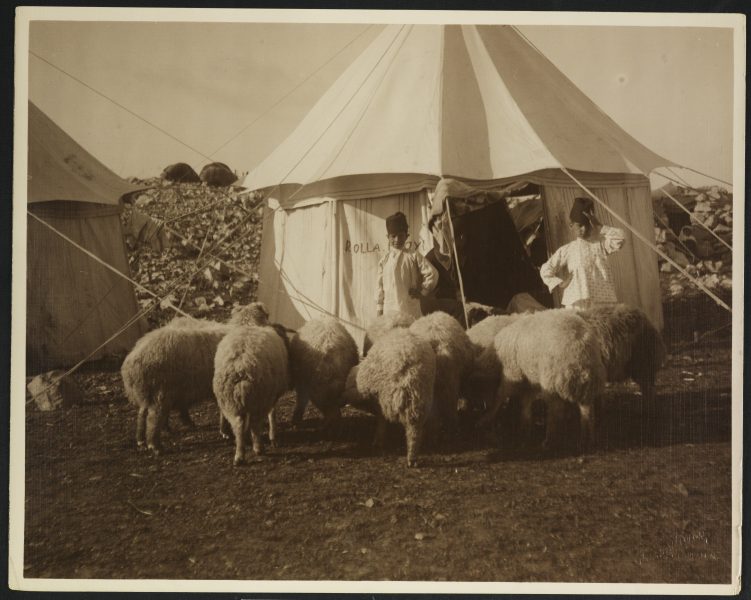 At sunset, as the sun begins to sink behind the hills of Samaria, the High Priest (who we identified as Yaacov son of Aharon) recited the sacrificial prayer while lifting up the Torah scroll he brought with him. The Aramaic piyut which accompanies the ceremony deals with Isaac and the ram Abraham sacrificed in his stead – an event which the Passover offering sacrificed by the members of the sect comes to replicate. This is an ancient custom no longer found in Judaism and was therefore an object of curiosity for contemporary European researchers and tourists. 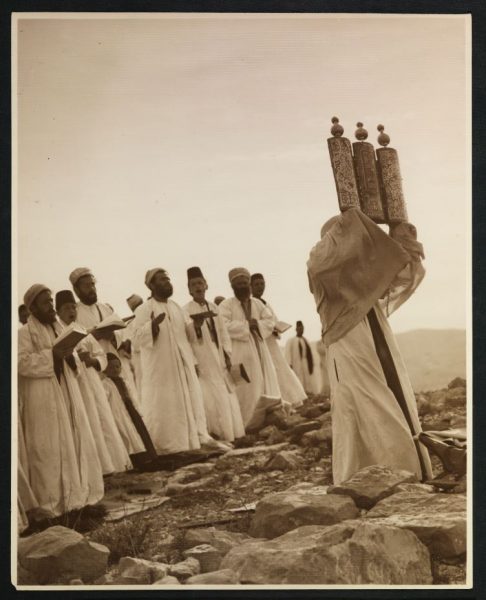 Two final preparations for the central event – the offering of the sacrifices: shearing the fleece and igniting the coals. 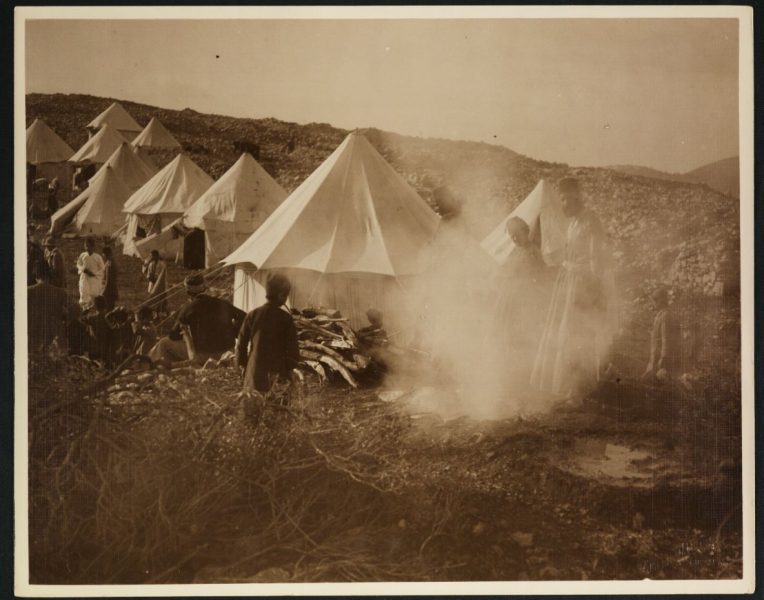 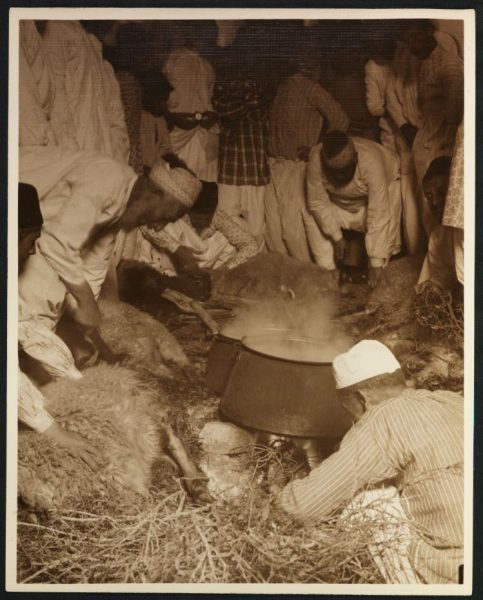 When everything is ready for sacrificing the offerings, the sheep are slaughtered and hung to be roasted. 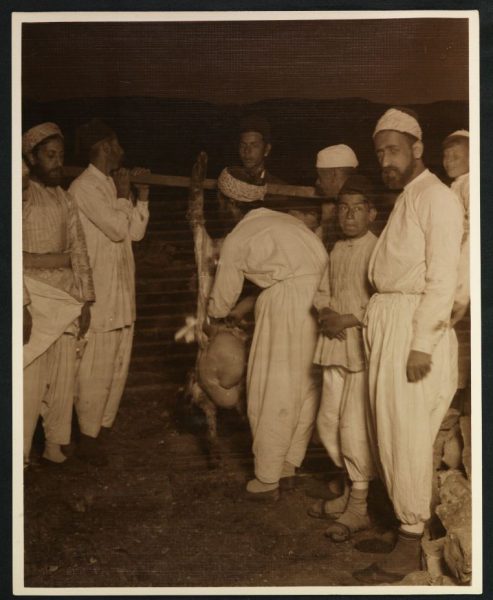 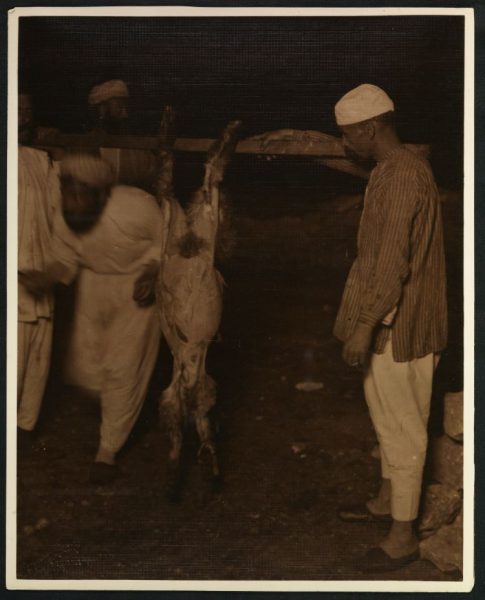 Guests who are not members of the sect are permitted to attend the ceremony, and several curious figures in European dress appear in the ceremony documented in the photograph album. 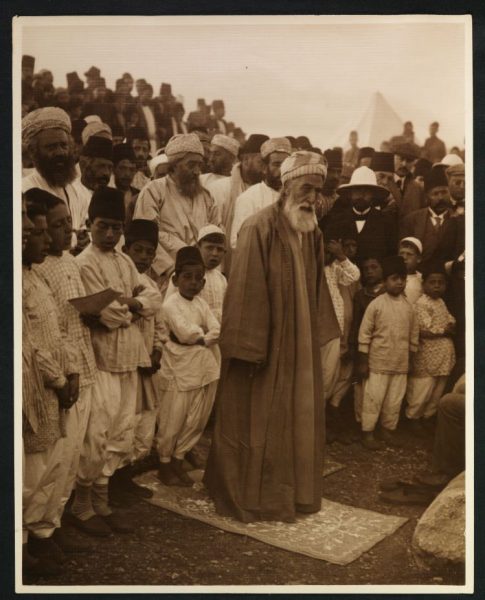 The Passoverl offering was the only festival in the Samaritan calendar in which women were permitted to ascend the mountain and participate in the prayers together with the men. 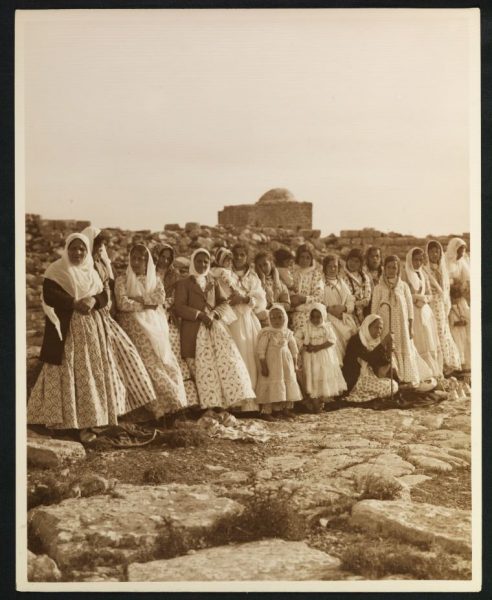 Only members of the sect are permitted to eat from the offerings, which are eaten under the supervision of the High Priest – standing in the center leaning on his staff. The parts not eaten are burned on the alter. 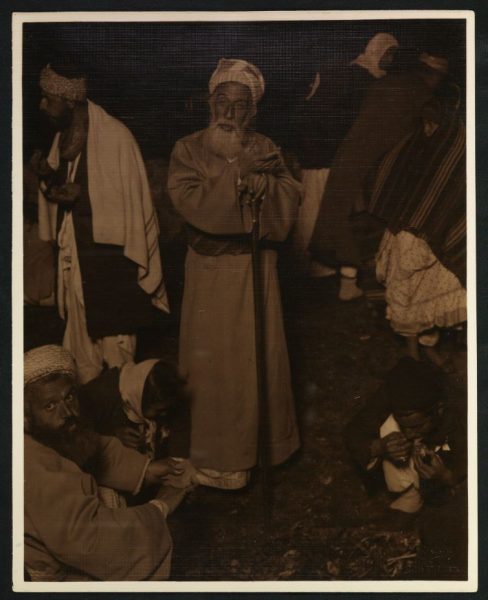