Eight hundred affluent men were invited to a lavish banquet. However, something was missing at that dinner that made them open their wallets. 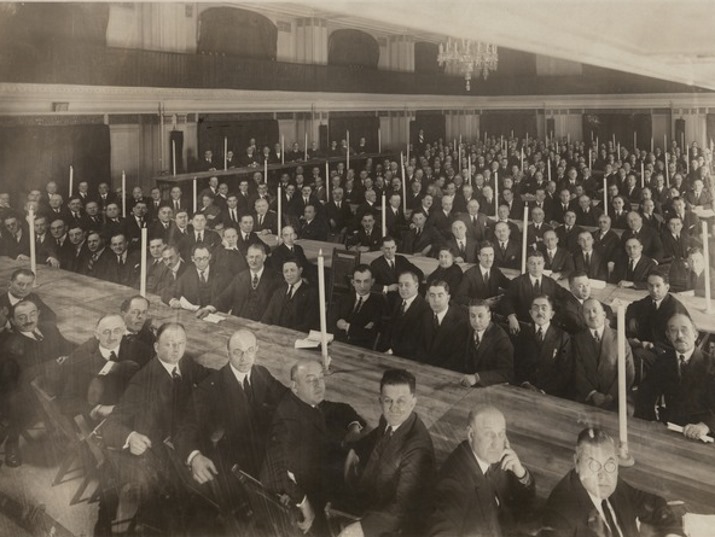 The archivist tasked with deciphering an unlabeled photograph faces a difficult challenge. It takes ingenuity to figure out an event captured in a photograph, where and when it was taken, when there is no written information to go on. This photograph, which I came across in the collections of the National Library, is one such case: a large silver print photograph documenting some important event that apparently took place in the United States. 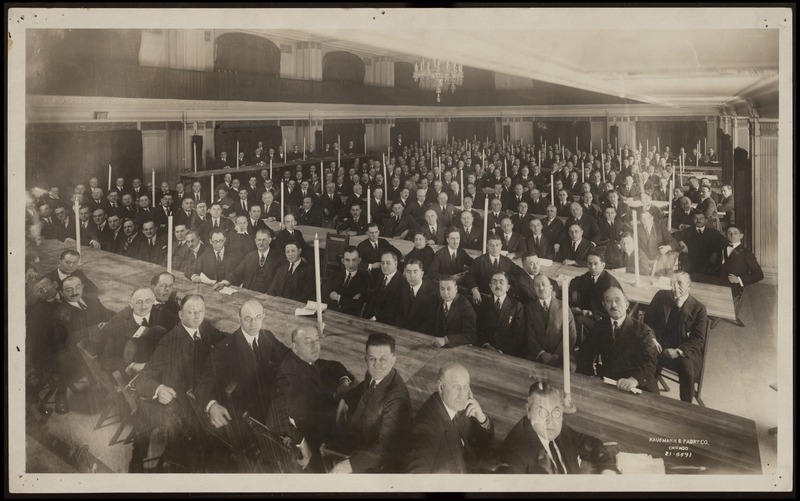 The puzzle was solved after consulting Irving Cutler’s fascinating book The Jews of Chicago: From Shtetl to Suburb, in which the complete story was laid out, and gave the photograph even greater significance. According to Cutler, relief committees in Chicago to help the Jews in Russia had been fundraising for the better part of a decade. Starting from the middle of the First World War, they had succeeding in raising millions of dollars for Jewish communities in Eastern Europe who were suffering from persecution, pogroms and wars. Chicago’s wealthy Jews were deeply affected by slogans like “Save our dying brothers!” and contributed generously. However, for Jacob Loeb, one of the Chicago community’s Jewish leaders, this was not enough. He wanted to hold an extraordinary fund-raiser that would collect a sizeable sum all at once. Loeb decided to actually implement one of those slogans that had so moved Chicago’s wealthy: “Suppose you were starving!”

Loeb organized a gala dinner to which the crème de la crème of Illinois Jewish society, including Chicago’s greatest industrialists and businessmen, were invited. On the evening of December 7, 1921, eight hundred men dressed in their Sunday best, gathered at the luxurious Drake Hotel in Chicago for what they were certain would be an exclusive social event at the center of which would be a lavish banquet. However, the guests were in for a surprise. As the last of them entered the hotel ballroom, the doors were locked. Jacob Loeb stepped up to the podium and began speaking: “For so many to dine in this place would mean an expenditure of thirty-five hundred dollars, which would be unwarrantable extravagance and in the face of starving Europe, a wasteful crime.  Thirty-five hundred dollars will help to feed the hungry, clothe the naked and heal the sick. What right have we to spend on ourselves funds which have been collected for them? So that this money might be saved for them, you are brought here to this foodless banquet.”

In the midst of Loeb’s admonishment, the astonished guests noticed that the tables, with the exception of the long slender candles that illuminated the strange event in which they now found themselves, were indeed bare. Their bewilderment was captured by the flash of Kaufman and Fabry’s camera, and recorded in the photograph commemorating this unique event.

The evening Loeb organized turned out to be a great success. Checkbooks were opened and fat were sums recorded for the Relief of Jewish War Sufferers Fund. That night the wealthy businessman Julius Rosenwald exceeded all others with a donation of one million dollars. This was an unprecedented sum, even for a philanthropist like Rosenwald, who later went on to establish the renowned Museum of Science and Industry in Chicago.

Word of the huge donation reached US President Woodrow Wilson. Well aware of the attempts of American Jewry to help its brethren in Eastern Europe, the president immediately sent a telegram to Rosenwald thanking him for his generosity and for serving the American values of democracy and humanism.

The liberality of Illinois’s Jews would help numerous humanitarian and Zionist causes over the decades. However, it would appear that the success of the fundraising at the foodless banquet at the Drake Hotel, was never duplicated.