Looking for proof that nothing ever changes? In this ancient letter a mother complains to her son that he doesn't write to her often enough… Sound familiar? 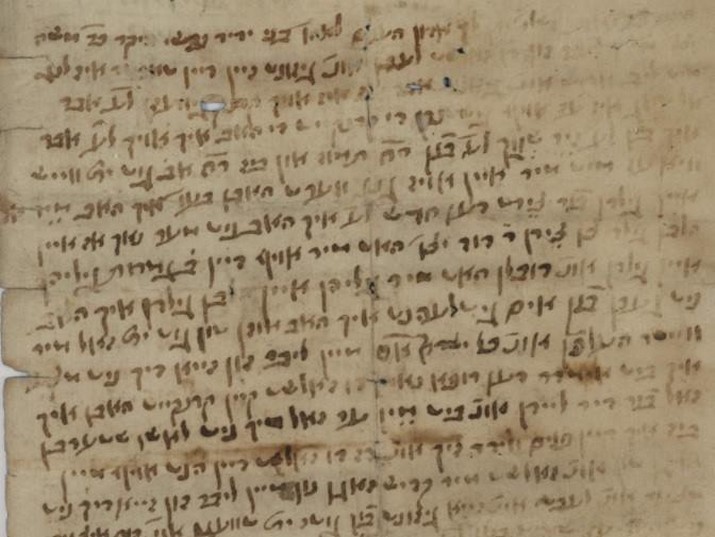 Among the treasures discovered in the Cairo Genizah are also documents written in Yiddish.

In fact the Cairo Genizah is the source of the oldest Yiddish texts in the world – an anthology of midrashim and parables, and even a German folk legend about a valiant duke who performs acts of gallantry to win the heart of a Greek princess.

But daily life interests us more than legends of knights and princesses, so we decided to present excerpts from a series of letters from Rachel Zussman, an elderly widow who lived in Jerusalem, to her son Moshe, who settled with his family in Cairo for business reasons. The letters were written in Yiddish in the mid 1560’s, and eventually made their way to the Cairo Genizah. They teach us much about the composition of the community in Jerusalem, its economic state, and communication and travel between Jerusalem and Egypt, as well as a mother-son relationship dating back 500 years.

From what we can tell, Rachel Zussman seems to have been a comparatively educated woman who was relatively financially stable. Nonetheless, she appears not to have written the letters herself, but instead dictated them to a professional scribe, who may have incorporated verses and proverbs. Her husband died in Jerusalem, and it was there that her financial situation deteriorated, as we will see.

As typified by the stereotype of the “Jewish Mother”, Rachel complains about the lack of letters from her son (and a letter from her son explaining why he didn’t write back was even found in the Genizah). Less stereotypically, her son Moshe married a woman named Masuda, in other words a Jewish woman who originated from the Arab countries, and Rachel was very satisfied by the match, even suggesting that his daughter Beila (her granddaughter), who had reached marriageable age, be married to a young man from Masuda’s family. 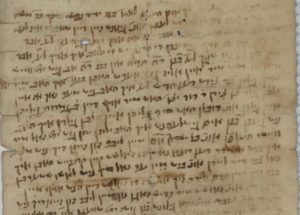 Here are excerpts from Rachel Zussman’s letters, translated into English from the Hebrew translation of Chava Turniansky, who translated and published the letters:

“My dear son, may you live and be well…I, lo aleinu, am very sick, lo aleinu, God Almighty knows what will be my end due to our sins…my dear son, do not be distressed. I also ask the faithful doctor (in other words, God) for you not to be sick – for me to suffer instead of you. And I also ask that He not let me die until I see you once again and you place your hand over my eyes and recite Kaddish after me. And so, my dear son, do not be distressed, live and be well…

I do not know where to obtain money from. Poor people have no money. My dear son, bring me a linen garment with you. I do not have, due to our many sins, a sheet on my bed, or a cover for my pillow. If I was, God forbid, to die I would not have a sheet to be covered in when they remove me from the bed. I am ashamed before other people. I do not have a turban for my shrouds to put on my head. If you are able to buy me one there cheaply, do so. And bring barley with you. I could not find any here at all. Bring two.”

A reply from Moshe to his mother was also discovered in the Genizah:

Further on in the letter he also reports about the boys’ studies with their teacher, and about the idiotic son, about whom he says that talking to him is like “talking to a plank”.

Moshe’s letter was sent to his mother Rachel in Jerusalem, so how did it end up back in the Cairo Genizah? Because his mother wrote her reply on the blank spaces on the page, and sent it back to Cairo. She had much room to write, as her son Moshe’s letter was relatively short… Here is a quotation:

“To my beloved son, my dear Moshe, and to your dear and modest wife my daughter-in-law Madam Masuda. I understand that you did not receive all my letters… My dear son, I am very very hurt and distressed that you distress me so much due to our sins with your deliveries… my dear son, God will forgive you for distressing me so much. Had you at least sent me the [the page is torn here] and the barley for an entire year…” However, the letter is also full of motherly good advice, from the way every loan should be meticulously recorded, to the following:

“Go and bathe in the river as little as possible. In this way it will not be able to harm you.”

(The seven letters discussed in this article were published and translated into Hebrew by Chava Turniansky in an article in volume 4 of the ‘Shalem’ journal. They are all in Cambridge, except for one which is in the National Library in Jerusalem. A decade ago, more excerpts from letters in Yiddish to and from Rachel Zussman were discovered in Cambridge.)