The Viral Nature of Anti-Semitic Imagery

The Dreyfus Affair that divided France and risked the Republic is not just the story of the sham trials, it is the story of the first viral hate campaign of images in mass media brining to the surface the most ancient of hatreds in a brand new way. 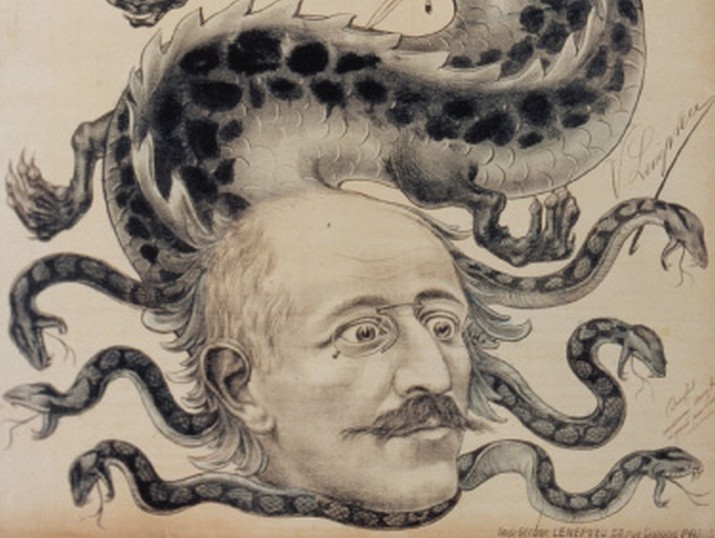 While anti-Semitic imagery and iconography has existed and was promulgated for centuries, it was the eruption of the daily newspaper and the popularity of the postcard in the mid-19th century that enabled the dissemination of the images faster than ever before.

The Dreyfus Affair that brought to the surface the division of France is not just the story of the sham trials and Emil Zola’s “J’Accuse”; it is also an example of one of the first image campaigns in the press, instigated by Zola’s famous publication.

“J’Accuse” hit the papers on January 13th, 1898, in L’Aurure, the famously Dreyfusard publication, at the height of the Dreyfus Affair. It is arguably Zola’s most famous piece of writing, fiction or non-fiction. However, it initiated what might be termed in contemporary language the first viral campaign. A war of images regarding Alfred Dreyfus as either  innocent or traitor, human or monster, was battled between newspapers that had a wider distribution than ever before.

While Zola and his Dreyfusard allies were caricatured by the anti-Dreyfusards, the truly vicious images were of Alfred Dreyfus himself. The anti-Semitic depictions published by La Libre Parole in a series named the Museum of Horrors showcased Dreyfus as a snake, to give but one example. The series was published during Alfred Dreyfus’ new court-martial in 1898, and the caricatures were clearly aimed at all French Jews whoever they were.

The so-called viral nature of the image exchange indicates how close to the surface the hatred towards Jews had bubbled during that period of time. The blunt racism and anti-Semitism depicted in the caricatures published at the time threatened to destabilize the state, using the Jews as a tool of division by the right as a perfect scapegoat.

It was a golden age of caricatures. This art converged along with the daily newspaper and the Dreyfus Affair. It enabled the slew of images of hate aimed towards a minority to be engaging, entertaining, and viral. The idea spread to other European countries, all the way to the United States.

The stereotypes and canards perpetuated in the caricatures drew from both the antiquated ideas of Jewish usury and greed, but also modern ideas of conspiracy, as well as industry domination and control, which had been made popular by the publication of “The Protocols of the Elders of Zion”. Those ideas rose in prominence through the publication of caricatures showcasing Jews attempting to disguise themselves as non-Jews, Jews being portrayed as world dominators, and manipulators of finance and politics.

This article was written with the help of Dr. Betty Halpern-Guedj from the Library Collections.

Information for the articles was gathered from Dreyfus and Zola: A Moment in the Conscience of the World, Dryfus: The History of a Jewish-French Family, and Hatemail: Anti-Semitism on Picture Postcards.