The Feminist Version of the Jewish Morning Blessing

Do you thank the Almighty for making you a man or a woman? Two fifteenth-century manuscripts show the choice is yours! 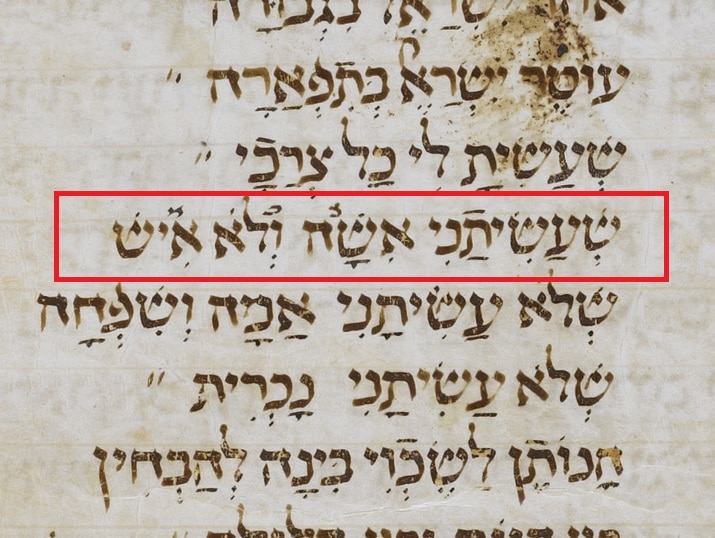 The traditional Jewish morning blessing includes a verse in which males thank God with the words: “who has not made me a woman.”  Women reciting this verse often modify it to “who has made me according to His will.” This tradition took root in the siddur (Hebrew prayer book) centuries ago, but two fifteenth-century manuscripts reveal a groundbreaking thinker who chose a somewhat more progressive wording for this controversial blessing.

Abraham Farissol changed the familiar wording of the blessing to “who has made me a woman and not a man” in two prayer books he dedicated to two anonymous women.

As a Jewish thinker of the highest order, Abraham Farissol’s reputation preceded him. Recognized for his erudition in his lifetime, Farissol’s many pursuits included cantor, scribe, and teacher. Deeply interested in the advancements of the Age of Discovery sweeping across Europe, he composed the first essay in Hebrew dealing with the discovery of America.

Along with being a pioneering thinker, he was also an exceptional man of faith.  In 1471 and 1480 Farissol hand-wrote two prayer books for women which contain a fascinating feminist innovation. In the prayer book as we know it today, the man reciting the morning blessings thanks God for life that is renewed each morning, for not making him a Gentile, for not making him a slave, and in the words of the prayer that has provoked countless debates, he blesses the Almighty “who has not made me a woman” or in another version “who has made me a man and not a woman.” The woman, for her part, thanks God with the words “who has made me according to His will.” In fact, the text of the accepted blessing for women – “made me according to His will” – is not found in the Talmud, but is mentioned in the early–fourteenth-century halakhic work Arba’ah Turim (lit. “Four Rows,” an important work of Jewish law by Rabbi Jacob ben Asher, known as Ba’al Ha-Turim – “Master of the Rows“).

And so, 150 years after the Ba’al Ha-Turim, when Europe was moving out of the Middle Ages, Abraham Farissol wrote two Hebrew prayer books which changed the accepted wording of this morning prayer. In the age of the Renaissance, Farissol abandoned the medieval wording “made me according to His will” in favor of a more interesting, progressive verse – “who has made me a woman and not a man.” One of these books is today kept at the National Library of Israel, while the other is preserved at the Jewish Theological Seminary of America in New York.

We do not know the identities of the two women who Farissol dedicated his books to, as their names were erased from both siddurs. It is possible that Farissol wrote additional prayer books with this blessing which have not yet (or may never) come to light. It is not clear how widespread the change Farissol introduced was or whether it remained the exclusive province of the thinker. What is certain is that at least these two women walked with their heads held high, feeling proud that their Creator had chosen to make them women, and not men.