Home > Israeli Memorial Day > A Life Story in One Picture: The Photographer Who Fell in the War of Independence
Diaspora

The discovery of an obscure picture in a family photo-album led Adva Magal-Cohen to embark on a journey to piece together the life story of the mysterious Moshe Weizmann. 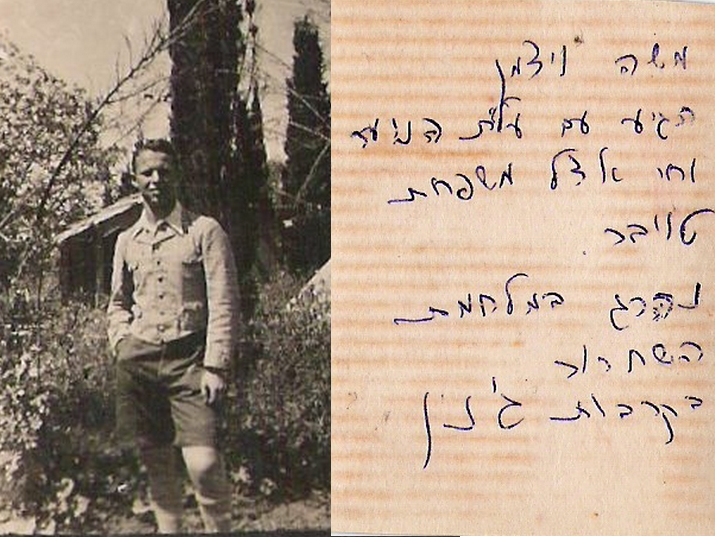 A picture of a young man wearing short trousers, with a brief caption scribbled on the back: “Moshe Weizmann. He came with the Youth Aliyah organization and lived with the Teuber family. He was killed in the War of Independence in the Battles of Jenin.” This one image discovered by Adva Magal-Cohen while leafing through a family photo album, is what set her on a journey to trace the life story of a man she had never heard of before, who was killed decades earlier when he was only 26 years old.

“A young man in three-quarter-length trousers. In the background is a tent. Cypress trees on a hilltop. An unknown relative. I turn the picture over and the backside reveals a short explanation in my grandmother’s handwriting.”

This is how Magal-Cohen describes the moment she discovered the picture, completely coincidentally, while going through the family’s notebooks and albums to research and document the story of her grandmother, Rachel Teuber.

Rachel, who fled the pogroms in Podolia, built her home in Balfouria, a Jewish farming community in Mandatory Palestine. There, she opened her home to the young Moshe Weizmann, who arrived in Israel without family through the Youth Aliyah organization. Adva’s older family members knew that Moshe was a photographer and that he had photographed Adva’s father when he was a little boy. It was a picture Adva knew well, but it had never occurred to her to search for the photographer’s identity. Now, the thought would not leave her. Adva continued to investigate, but apart from the limited details provided by her family, she did not know anything else about Moshe’s life.

Adva’s continued search took her to the memorial archives for fallen soldiers of Israel. There, she was able to locate the memorial page dedicated to Moshe Weizmann.

The page tells that Moshe Weizmann was born on July 9, 1922, in Vienna. There, he learned the art of photography from his father who was a reputable professional. Moshe immigrated to the Land of Israel in 1939 and underwent agricultural training in Balfouria for two years. Later, he was assigned a post as a guard at the British base in Ramat David. Moshe’s father Zvi managed to reach Mandatory Palestine and open a photography shop in the northern city of Afula. After his father died, Moshe continued to run the store until he was drafted into the Golani brigade and mobilized to the Jenin front. On July 10, 1948, the day after his 26th birthday, he was hit by an enemy bullet and died. His body and the bodies of his comrades remained on the battlefield for ten days or more, until they were finally recovered. He was buried in the military cemetery in Afula.

Yet this was just the beginning of the story.

Try as she might, Adva could not stop thinking about Moshe and she continued to dig deeper into the story of the young man she had never known. Little by little, she discovered details in the archives and managed to document Weizmann’s life and the lives of some of his family members.

Her research first led her to the story of Moshe’s father, Zvi Weizmann, a Viennese photographer, who died in April 1941.

In Vienna in 1938, the Weizmann family suffered at the hands of Nazi abuse. In one markedly difficult event, Zvi was forced to lift a heavy motorcycle, an incident which seriously damaged his health.

In the Zionist archives, Avda was able to discover Moshe’s Youth Aliyah file. It revealed that he immigrated on board the ship “Galil” in April 1939, after bearing witness to the riots in Vienna. Four months later, he wrote a desperate letter (in German) to the Youth Aliyah offices at the Jewish Agency in Jerusalem, asking for permission to travel to the town of Rishon LeZion. In the letter, he explained how his mother had died in Vienna a month earlier and that he was trying to enlist the help of a relative in Rishon LeZion to rescue his father from Austria (which was already under the control of Nazi Germany). And so he wrote: “Now it is in your hands, to grant me permission to save my father, therefore, I urgently request to give me permission to embark on this critical journey …” He signed the letter: “Maximilian Weitzmann, Moshe Weizmann, staying with the Teuber family, Balfouria”. The special leave was granted and Moshe successfully helped his father escape to the Land of Israel.

Zvi Weizmann boarded the illegal immigrant ship “Sakaria” in early February 1940. The ship was subsequently stopped by the British and Zvi was sent to the Atlit detention camp for six months. In August 1940 he was released, allowing him to join his son in the Jezreel Valley. He would spend less than a year in Afula, where he would reside until his death.

Later, Adva was able to locate people who knew the father and his son. They told her about the boy Moshe, who was the only Betar (a right-wing Jewish youth movement) supporter in a group of socialist youth. They told her of Moshe’s move to Afula with his father and that the two had established a photography shop. They worked there successfully for a few months. However, at the age of 55, only a short time after he arrived in Israel to begin a new life, Zvi passed away due to complications from the injury that had compromised his health years prior. Moshe was left alone and continued to run the photography shop without his father.

A friend of Moshe in Afula, related that he received a camera from him for his 18th birthday. Slowly, the story of the photography shop began to unravel. Magal-Cohen next discovered photographs taken by Zvi Weizmann. The photographs were taken in Vienna and were now being sold at auction. She also discovered photographs taken by Moshe Weizmann, on the back of which he stamped the words: “Photo-Weizmann, Afula.” The photographs are of Afula during the British Mandate, a demonstration against the White Paper, a pro-British rally during the war and a few pastoral photographs of palm trees in the city. Magal-Cohen also found photographs of a group of boys from the Youth Aliyah organization, with Moshe Weizmann appearing among them.

In the Afula municipal archives, Magal-Cohen found a handwritten letter by Moshe Weizmann. In July 1943, he requested a waiver for a fee required by the local council to maintain a signpost for his shop. Weizmann had been drafted by this time and was serving as a guard. His father had died two years earlier and it was difficult for him to pay the fee.

Adva also found a list of those who were called upon to be drafted from Afula. The name “Weizmann, Moshe” appears on the list as number 22. A document of those who reported for service was also published. Moshe Weizmann is number 36 on the recruitment list.

In December 1949, the secretary of the Afula Council wrote to the district officer and listed residents of the Afula area who had recently fallen in the war. Under the number 7 is written: “Weizmann, Moshe”. A note was added stating that the exact date of death was unknown. The location was listed as “near Zir’in.”

The journey that began with one photograph revealed not only the image of Moshe Weizmann, a fallen soldier of the War of Independence, but also a complex family history and the story of a man whose family was shattered to pieces.

Finally, Magal-Cohen learned that Siegfried, Moshe’s brother, immigrated to London from Vienna around the same time Moshe arrived in Palestine. He was also a photographer and established a thriving event-filming business. He even photographed weddings of the British nobility and royal family. Siegfried and Moshe had planned to meet at the London Olympics after the war, but this reunion enver took place. Siegfried visited Israel once and went to see his brother Moshe’s grave. One of Moshe’s friends bestowed upon him two albums of photographs taken by Moshe during his years in Balfouria and Afula.

During her investigation, Magal-Cohen was able to contact Siegfried’s children – Moshe’s nephews. They told her that their father had continued to engage in photography and became the first importer of Japanese cameras to England. The family eventually shut down the photography business; today they run a successful real-estate agency. Siegfried’s children plan to travel to Israel soon and visit their uncle’s grave. They also hope to find more lost photo albums.

Thus, the story of the life and death of the late Moshe Weizmann, one Israel’s fallen heroes, was discovered in all its richness and history. Were it not for the persistent research that eventually became the book: “A Woman Sits and Writes – Rachel Teuber” (which can be found on the shelves of the National Library), Moshe Weizmann would be just another name, another number. A man killed at the age of 26, who today would be well over 90 years old.

For further reading (in Hebrew): “Memory on the Margins of Memory: Moshe Weizmann – An Oleh, a Photographer, a Casualty” from the bi-monthly periodical “Et-Mol,” Issue 243

If you liked this story, try these:

Who Are These Unknown Soldiers?