Home > Gesher L’Europa > Felix Nussbaum: Painting a Self Portrait of Death in the Holocaust
Diaspora

Felix Nussbaum painted multiple self-portraits during the Holocaust, giving us a unique artistic insight into the experience of one man, among the millions that were murdered. 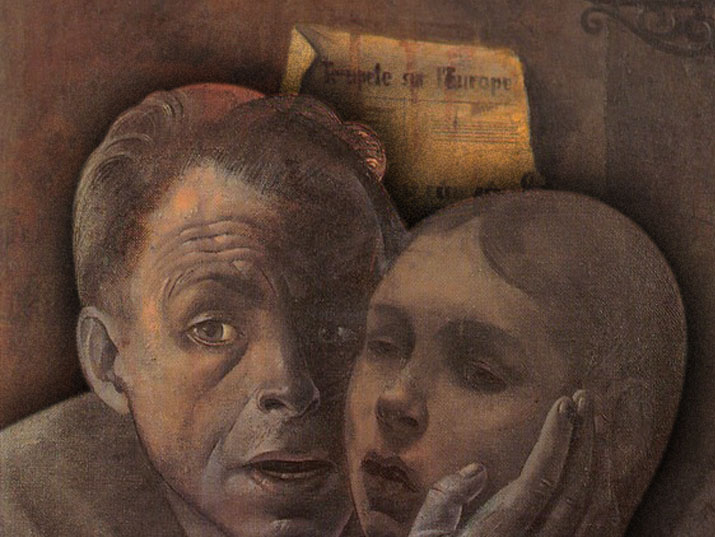 "Fear," by Felix Nussbaum, 1941. Self portrait with his niece Marianne. Oil on canvas. Image from the Folklore Research Center, Hebrew University of Jerusalem

Imagine witnessing your fate unfolding before your eyes. Imagine having the ability to know what the future holds, to know how death will come and to know that there is no way for you to change that. What would you do with that knowledge in hand? For Felix Nussbaum the answer was obvious. He had dedicated his life to his art and spent his final years illustrating life as a Jew under the Nazi regime through his paintings, sharing his own journey and experiences as a target of persecution and the horrors that came along with being a Jew in the Holocaust, in the best way he knew how.

Felix Nussbaum was born on December 11, 1904, in Osnabrück, Germany into a well-respected and well-off Jewish family. His parents, Phillip and Rahel, recognized their son’s budding artistic talents at a young age. Phillip was also an amateur artist himself in addition to owning an ironworks firm. Felix’s parents decided to encourage their son to develop his natural skill and supported him as he attended different art schools across the country from Hamburg to Berlin. In 1927, Felix held his own art show and later participated in group shows and designed a series of covers for a Berlin-based art magazine.

In 1932, Felix applied for and was accepted to the Berlin Academy’s Villa Massimo in Rome. In October of the same year, Felix left Berlin and moved to Rome together with his partner, Felka Platek, who was also a budding Jewish artist. Little did he know that he would never return to his home country.

In December of 1932, Felix received news that a fire had started in his Berlin studio, a space he had rented out to fellow artists for the duration of his absence. He lost over 150 pieces to the flames and was understandably devastated. Just a few months later in the first half of 1933, the Nazi party rose to power and the political and cultural atmosphere took a sharp turn. Dr. Joseph Goebbels visited Rome and made a stop at the German Academy to meet the students. Goebbels gave a lecture on Nazi art doctrine and explained that the Aryan race and heroism were the main themes that the Nazi artist should develop. Felix quickly understood that his time in the Academy was limited as there was no space for him within the world of National-Socialist art.

The Nazi regime, however, did have an immediate impact on Felix’s art as he began painting what he saw as the fall of civilization. His painting, “Destruction,” reflects his feeling of impending doom, showing a couple standing among the architectural ruins and destroyed artworks. Forced to leave Rome and the academy but unable to return to Germany, Nussbaum and Platek moved to Alassio, Italy where they lived comfortably with the support of Felix’s parents.

In 1935, Felix and Felka left Italy and moved to Belgium via Paris, in what became a nomadic existence of exile from their home country. Felix continued his painting at each destination, taking comfort in his work through his art from this period clearly reflects the growing discomfort and anxiety he felt at the ever-increasing danger to the Jewish community.

In 1940, German troops marched on Belgium. Felix Nussbaum was arrested, along with 7,000 others, and sent in a wagon to the internment camp at St. Cyprian. He managed to escape and returned to Brussels where he went into hiding with the help of a friend, an art dealer. Felix, ever the artist, drew the horrors of life in the internment camp. His painting, “Self-portrait in the Camp,” reflects the inhumane and humiliating conditions he experienced while in the camp.

Throughout his time in hiding, while living in constant fear for his life, he continued to express himself through his art, persistently chronicling the ever-worsening conditions and the perpetual dread that their hiding spot would be discovered by the authorities.

Felix recognized the inevitable and he resigned himself to his predestined fate at the hand of his Jewish identity. He painted his people, the poor and damned. He did not reflect hope or survival in his works, choosing instead to paint from reality.  He painted “Self Portrait with a Jewish Identity Card,” a self-portrait in which he shows himself wearing the identifying yellow star imposed on every Jew, holding his identity card – the card that erased all hope of escape, knowing there was no way to separate himself from that identity. He painted himself backed into a corner with the knowledge that there would be no escape.

His final major work, “The Skeletons Playing for the Dance,” reflected the hopelessness of the situation from his perspective. Skeletons play musical instruments from the ruins of modern society – a cultured society of science, technology, art, and music. Among the skeletons, behind the organ, sits one figure who, while gaunt and malnourished, appears to be alive, suggesting that Felix held some hope that he would count himself among the survivors – a hope that would never be realized.

In July 1944, the Gestapo discovered Felix Nussbaum and Felka Platek’s hiding place. The couple was arrested and sent to the Malines transit camp where they were put on the very last transport to Auschwitz on July 31, 1944. They met their untimely deaths on August 4 of that year.