Who Spilled Honey on the 18th Century Manuscript?

You really should listen to your mother when she tells you not to read at the dinner table... 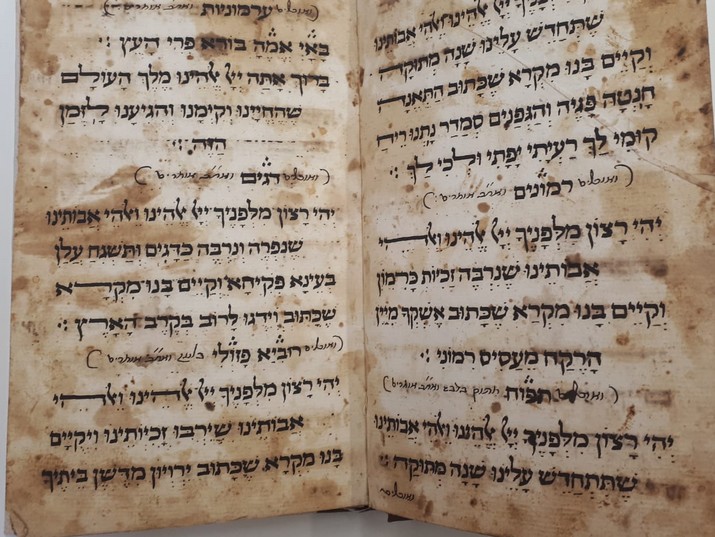 Take a look at this manuscript that entitled, “The Collection of Hoshaanot, Songs and Prayers, Annulments of Vows, Tashlichs and Other Things,” that was written by Shlomo Latis in Italy in 1790. The name describes the book well; a collection of various prayers and descriptions of Jewish ceremonies that were compiled into one manuscript. In addition to the beautiful calligraphy, the 18th-century manuscript features some unusual and mysterious stains. The stains themselves are odd as they are only present in the first section of the book, the portion that focuses on the holiday of Rosh Hashana, the Jewish New Year. 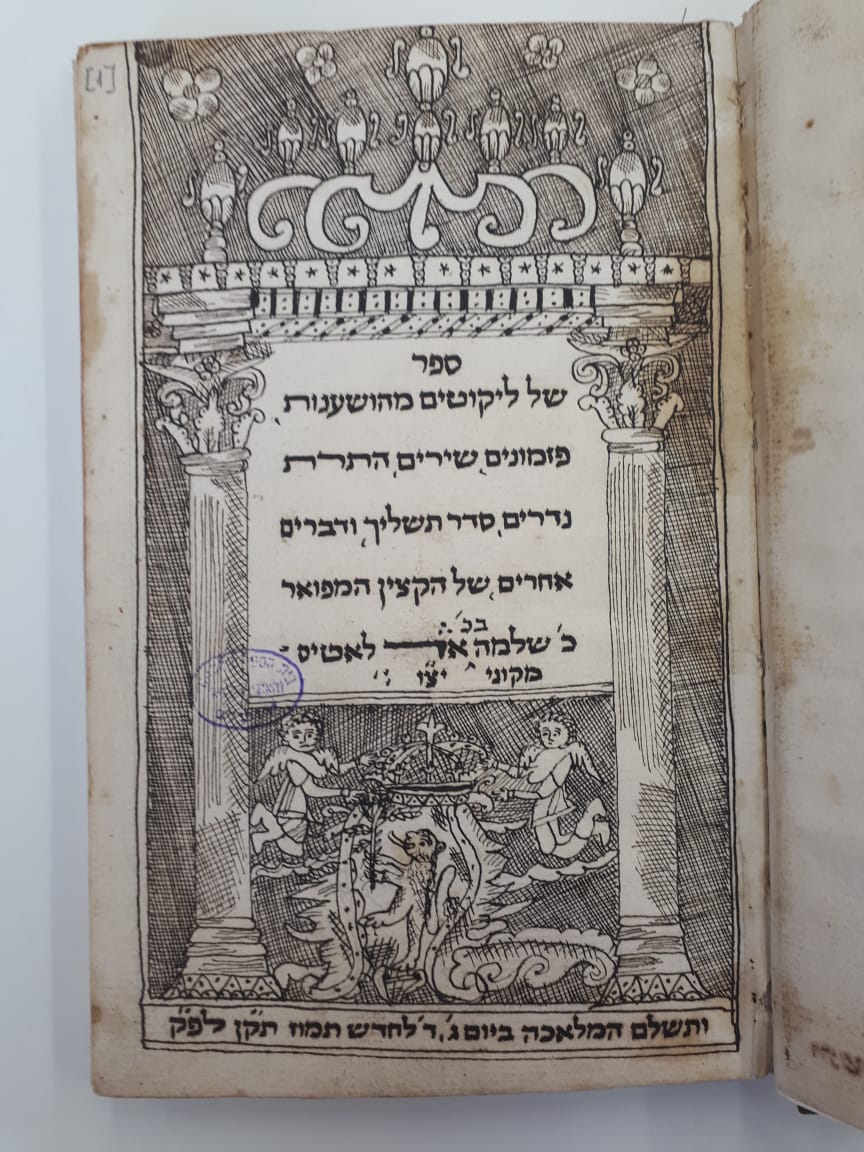 Typically, when we come across an old manuscript we assume that stains found on the pages are simply the result of ordinary wear and tear, with time itself leaving its inevitable mark. But this was not the case here, for two main reasons: the first being that the stains only appeared in the first section of the book and second, because of the content of the text featured on the stained pages. The year is 1790 – the year the manuscript was completed, or perhaps, a short time after. The book is opened to the prayers for the eve of Rosh Hashana. A Jewish- Italian family sits around the table to celebrate the holiday. Each member of the family is dressed in their holiday best, the table is beautifully set and the head of the family is reading the prayers aloud from the manuscript. They reach the portion of the services which includes the Simanim (symbolism) and the “Yehi Ratzon” (May it Be Your Will) prayers which are recited on Rosh Hashana along with the consumption of different foods that symbolically represent the prayers of a sweet and positive New Year.  The foods are eaten one by one following the recitations of the Yehi Ratzon prayer in accordance with tradition; the fish head so that we may be considered a head and not a tail, the apple in honey so that we may have a sweet year, the pomegranate so that our good deeds may multiply. The list is long and the blessings are plentiful. As the diners recite the prayers and eat the related foods, the honey is passed from person to person, as are the pomegranates, the beets, the carrots, the fish heads and the rest of the symbolic foods. The food, as is typical of food, falls off the serving dishes and the forks, staining anything around it – from the tablecloth to the manuscript. 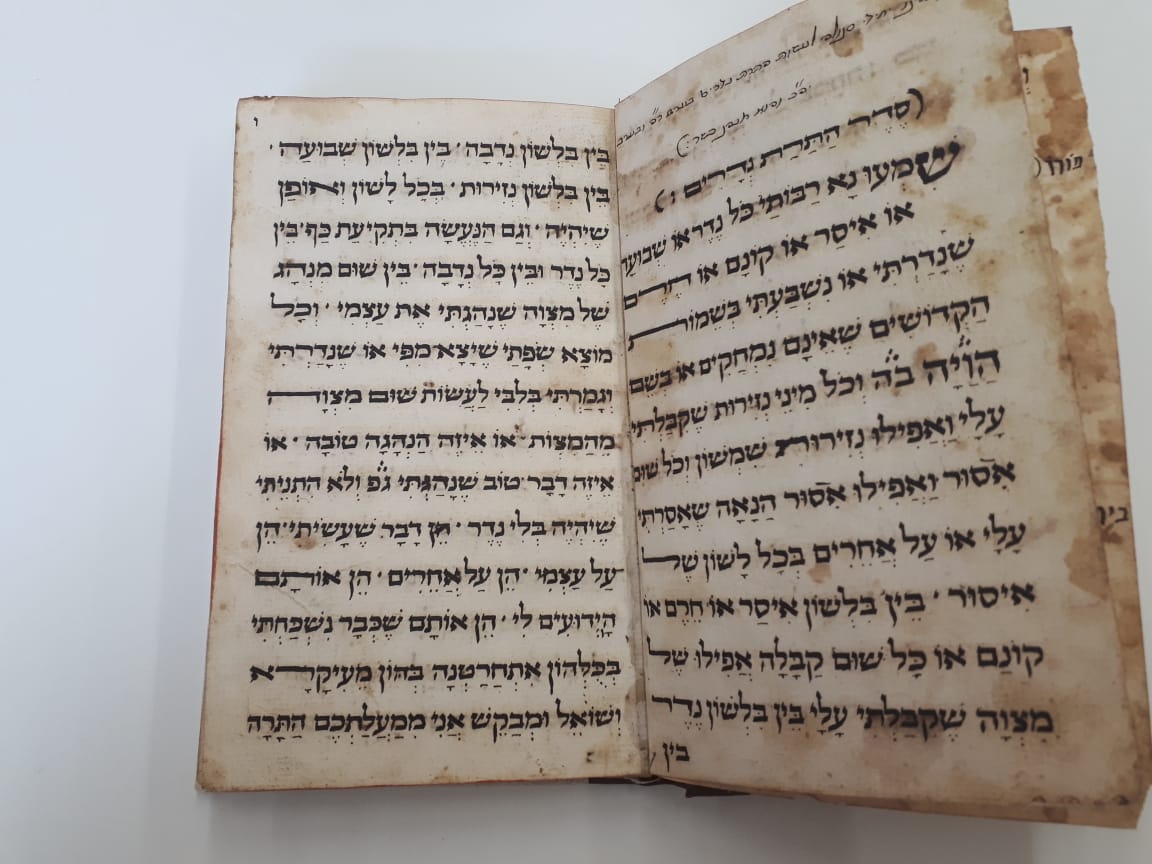 At the end of the ceremony, the man at the head of the table closes the book and sets it aside. The manuscript has finished its job for this portion of the holiday and the stains are left to set until next year when the book will once again be brought to the table. This explains why the stains only appear in the first portion of the book. Albeit, without a proper lab test we cannot confirm with absolute certainty that this scenario is what actually happened. But still, our deduction based on the set of circumstances surrounding the stains seem plausible. The book, along with the stains, is now preserved for future generations to study in the National Library’s Collection. So, we beseech you – this Rosh Hashana, be careful with the food during the meal. After all, there was a reason your mother always told you not to read at the dinner table.