How did Christians View the Destruction of Jerusalem?

This 500-year old map that depicts the destruction of the Temple as witnessed by Christians is a rare find. 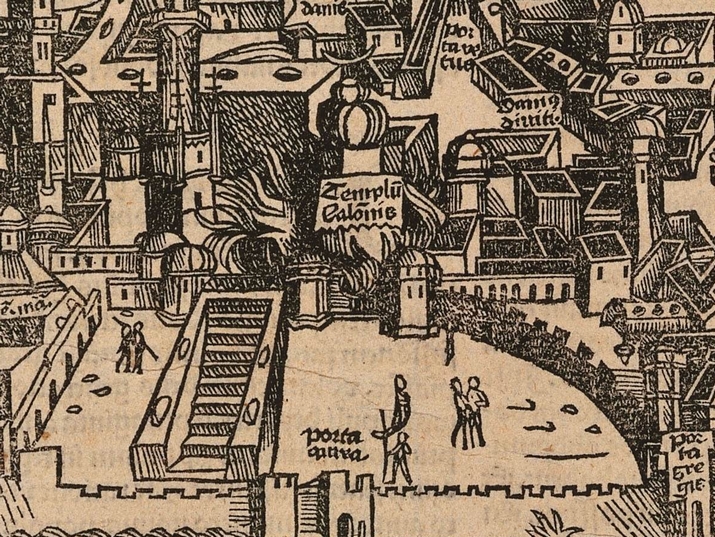 In commemoration of the Ninth of Av, the day of mourning and fasting marking the destruction of Temple, the National Library of Israel presents this ancient map printed in Hartmann Schedel’s large world chronical. The chronical, an early modern book, published in 1493 in the German city of Nuremberg was an ambitious undertaking. It contained an overview of world history from the creation of the world until that time. The book boasts a mass of illustrations drawn by the leading artists of the time and was only made possible due to the invention of the printing press.

The map illustrated the destruction of Jerusalem and depicts the Temple going up in flames. However, this is not an illustration of Jerusalem during the Second Temple period and a description of the Jews who lived there. It is rather the printing of an engraving depicting Jerusalem’s Christian sites alongside the Temple, typical to the 14th-15th centuries.

It is fascinating though, that the text accompanying the map describes the history of the destructions of Jerusalem – first, the destruction of the First Temple by Nebuchadnezzar, the destruction of the Second Temple by Titus, the Temple vessels being looted, the execution of Shimon bar Giora in Rome, and finally, Jerusalem being turned into Aelia Capitolina, the Roman colony built upon the ruins of the holy city. The author of the text relates that the city was later held for short periods of time by other Western and Crusader kings (Charlemagne of France, Conrad III of Germany and Louis XI, also of France) – but they did not manage to hold it for long against armies of Islam. According to the author, in 1943 the city was under the control of Mohammed’s battalions, which Schedel refers to as “a nation of sin.”