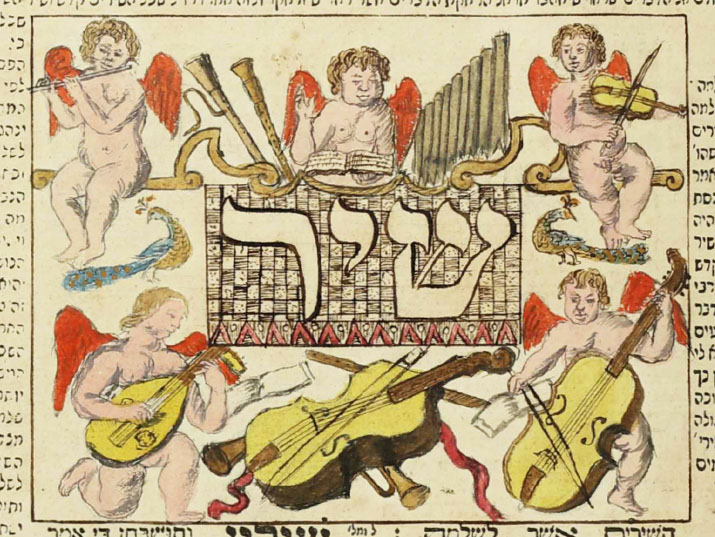 There’s nothing like discovering a rare, hidden masterpiece, right under your nose…

The Kehilot Moshe publication of 1724 was a celebrated achievement in its day. These days, any remaining volumes and complete sets of this mikraot gedolot, or rabbinic bible, are considered rare treasures in the world of biblical intellectual history and Jewish printmaking. Of all the remaining copies, The Twin Sets of Kehilot Moshe represent a special category as pre-ordered special runs.

Unlike the other copies with woodblock title initials, the Twin Sets’ title registers were left blank. The folios were removed from the press, and passed along to artists for illustration. The unprinted areas in the Twin Sets were completed as a special project, probably a commission.

Select title initials include hand drawn text and decorative illustrations with figurative narrative bible scenes. Most works are delicately illustrated with ink gouache paint. Some are illuminated in gold.

These figurative miniatures depict Jews as historical characters from the bible in classical costume, as well as characters in modern eighteenth century Dutch fashion. The bible characters include nude Adam and Eve, Moses, Pharaoh’s Daughter, Miriam, King David, a collection of putti, soldiers and many other figures. While representations of Dutch Jews of the seventeenth and eighteenth centuries can be found in a myriad of different artworks and styles, these bible miniatures are of the few rare examples of Jewish self-representation.

The first set of illustrated Kehilot Moshe is on long-term loan from Richard and Debra Parkoff to Yeshiva University’s Mendel Gottesman Library where it is being cared for by Shulamith Berger, Curator of Special Collections and Hebraica-Judaica at Yeshiva University Library. The second set of illustrated Kehilot Moshe was a more serendipitous finding. The special run of Kehilot Moshe was modestly hiding in an unmarked collection of three standard eighteenth century sets in the National Library of Israel’s Department of Manuscripts in Jerusalem. The National Library’s magnificent illustrated Kehilot Moshe includes seventeen miniatures of bible scenes. It is unknown who the artists were. Another unknown is who the Twin Sets’ original owners and patrons were. It was most likely a commissioned project, but there is no existing documentation.

What Can the Twin Sets of Kehilot Moshe Teach us?

The Twin Sets are eye opening in their richness of Jewish art history, in what they can tell us about the early modern publishing industry and about the city of Amsterdam during this period. There are two especially valuable lessons to be learned here:

Firstly, the Kehilot Moshe, created by Moshe Frankfurt, the Amsterdam av beit din (rabbinic court judge) and master book printer, was a project of the Ashkenazi Dutch intellectual rabbinic elite. The figural depictions in a Jewish bible teach us to reexamine the preconception that traditional Judaism disparages representational art. Like other iconoclastic faith practices, this book represents a diversity of opinions and artistic traditions.

Secondly, limited resources in book cataloguing limit our knowledge of the remaining Kehilot Moshe in libraries and private collections. Diminishing funds to the arts, and a diminishing focus on art works on paper and rare books makes it more difficult to know which of the remaining books may be illustrated. The Twin Sets remind us of the relevance of physical books, the necessity to continue to care for old books, and the vibrancy that collectors and libraries bring to cultural heritage.

Where Can You See the Twin Sets?

Since my visit in August 2019, Dr. Yoel Finkelman, Curator of the National Library of Israel’s Judaica Collection has sent the books for conservation treatment and evaluation. Meanwhile, the images will be digitally recorded thanks to his immediate recognition of this hidden treasure.

Images from the two editions that make up the Twin Sets will be featured together in Yeshiva University’s upcoming exhibition on Kehilot Moshe at Amsterdam Printing on Amsterdam Avenue in winter 2021 as part of a discussion on Jewish artistic traditions.