The Return of the Lost Siddur of the Jews of Catalonia

Following years of work, we take a look at a reconstructed medieval prayer book used by the Jewish communities of Catalonia, Valencia and Majorca 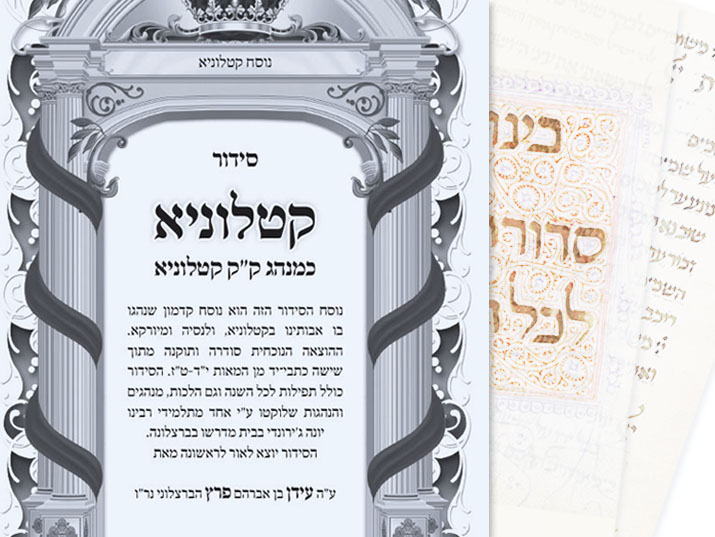 “May the Creator who conceived the entire world in His glory be sanctified and exalted. This is the day that the Lord has made; let us rejoice and be glad in it. A day when a new window has opened in the heavens and the streams of our prayers return to their stead. I give thanks before you, King living and eternal, to have been privileged to publish the prayer book of the holy community of Catalonia in an edition adapted to our times and to restore the original splendor and administer the customs of the holy communities that lived and thrived in the Middle Ages in the lands of Catalonia, Valencia and Majorca.”

With these words Dr. Idan Perez begins the Siddur Catalunya—the first complete reconstruction of the lost prayer book once used by the great pre-expulsion sages Nachmanides, Rabenu Yonah Gerondi, and Rabbi Hasdai Crescas, as well the Jewish communities of Catalonia, Valencia and Majorca, then independent kingdoms before their unification under the crown of Aragon and later Spain.

Dr. Perez, now head of the Rare Books Department at the National Library of Israel, worked on the restoration project for three years. The prayer book, which was never printed in its entirety (except as a Mahzor for the High Holy Days), was recreated based on six separate manuscripts. The earliest (a manuscript preserved in the Ginzburg collection in Moscow) dates to around 1352, more than one hundred years before the expulsion. The last of the manuscripts, preserved in Rome in the Biblioteca Casanatense, was copied in the year 1507, less than twenty years after the expulsion. “I didn’t add a single word of my own, everything came from the manuscripts,” he explains.

The first major obstacle facing the restorer was the inaccurate information that appeared in the catalog of the Institute of Microfilmed Hebrew Manuscripts. “Sometimes other rites of prayer were (wrongly) mentioned in the manuscripts as being the Catalan rite (nusach), and the manuscripts that were written in the Catalan rite were marked as other versions. The errors in the catalog stem from the fact that in the past, the information was copied from printed catalogs and not checked, and also because the Catalan prayer rite had not been thoroughly researched until now.”

Dr. Perez consulted with experts of the relevant prayer rites and with their help, prepared a list of manuscripts that contained without doubt the Catalan rite. “I then prepared a list of characteristics of the rite and the various customs that I found in the manuscripts (this list appears in the introduction to the prayer book).

I used Manuscript A (Ginzburg) as the basis. As a first step, I prepared tables of contents for all the manuscripts. I compared all the parts of the prayer book as they appeared in all six manuscripts and recorded the differences. In the prayer book, I used the earliest version as the basis, noting differences in versions or spelling in the footnotes and sometimes in square brackets in the text. The parts of the prayer book that are not found in Manuscript A were copied from the other manuscripts and this was noted in the footnotes.”

Whoever speaks with Dr. Idan Perez cannot help but notice his Spanish (more precisely, his Catalonian) accent. I asked him how he came to reconstruct the lost prayer book, “I am a native of Barcelona and I was always intrigued to know what the ‘Catalan nusach’ which the sages referred to actually was. As we know, this ancient prayer style did not survive because the communities of the Catalan Jews did not survive the riots, persecutions and the Holocaust. Today, there is no community that prays according to this nusach. I began my historical research about the Jews who fled Catalonia after the riots of 1391 and the expulsion in 1492 and reached important findings in the communities of the expelled Catalans in Italy, the Ottoman Empire and Algiers.” Thus, he learned about the lost prayer book and his ultimate goal became clear: “To restore the full text and be as faithful as possible to its earliest version.”