The original manuscript of Maimonides' "Commentary on the Mishnah", including mistakes and corrections made by the master himself, can now be viewed by the public 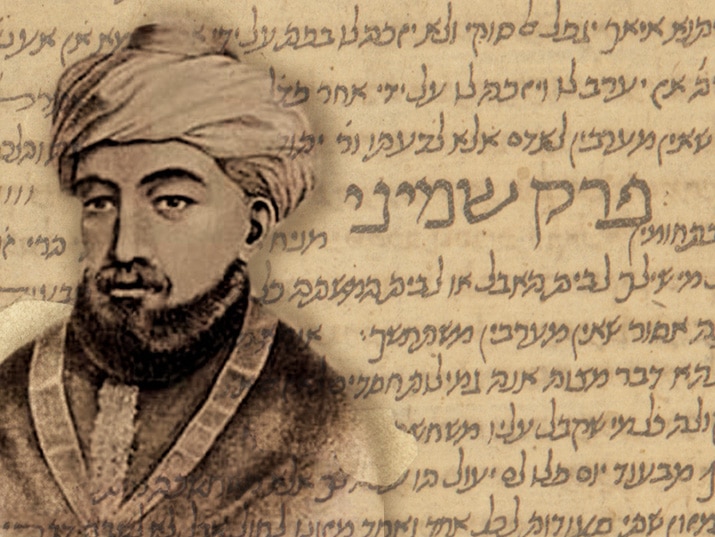 A portrait of Maimonides and text from his original manuscript kept at the National Library.

The “Commentary on the Mishnah” (Pirush HaMishnah LaRambam) is considered Maimonides’ first complete and mature work. The great Jewish rabbi, philosopher and doctor began working on it when he was only 23 years old, and completed the text at the age of 30 in the year 1161. Maimonides’ work most likely began when he was living in Morocco. He and his family soon fled east, shortly after the Almohad conquest of Southern Spain, and the Commentary was completed while Maimonides served as rabbi and leader of the Jewish community in Egypt.

The Commentary seeks to explain the intricacies of the Mishnah with reference to Halakhic law. Parts of it are considered to be important philosophical texts in the realm of Jewish thought, like the introduction to “Pirkei Avot” (Chapters of the Fathers) and the introduction to the chapter known as “Helek”, part of the Tractate Sanhedrin.

Maimonides quoted the Mishnah itself in the original language (Hebrew or Aramaic), while the commentary was written in Arabic using Hebrew letters. It was translated into Hebrew several times and often appears in print alongside the Mishnah and in most editions of the Gemara.

Maimonides’ family preserved the Commentary manuscript (along with other writings by their father) and even added their own notes to it. On most of the pages of the manuscript kept at the National Library of Israel we can see the handwritten notes of Rabbi Abraham, the son of Maimonides, as well as those of another descendant, Rabbi David Hanagid. This same David eventually immigrated to Syria, taking the manuscript with him. His family settled in the city of Aleppo.

The manuscript is mentioned as residing in Aleppo in Rabbi Yosef Karo’s book “Avkat Rochel” from the 16th century. At some stage Maimonides’ family apparently split apart. It is likely that the famous patriarch’s relatives all wanted a souvenir of his, and it was decided to divide the manuscript into six sections, in accordance with the six orders of the Mishnah on which the Commentary is based.

Later on, at the beginning of the 17th century, at least one segment of the manuscript – the “Nezikin” section that deals with civil and criminal law (and apparently the “Kodashim” order as well, dealing with sacrificial rites and dietary laws) – ended up in the hands of the wife of Abraham HaCohen Diknis. On the manuscript’s last page, she dedicated the text to the memory of her husband and their son Itzhak.

We know that same Abraham lived in the 17th century as he is noted as the owner of an unrelated manuscript from 1611 which is kept at the Bodleian Library at the  University of Oxford. We also know that he was dead by the 1730s, as the manuscript had changed hands by then.

In an introduction to the first part of the Commentary manuscript, Rabbi Solomon, one of Maimonides’ great-grandchildren, dedicated the text to the Heavenly Name and to the past and future generations of his family, up until the coming of the Messiah.

Rabbi Solomon noted that all who wished to read the text were welcome to do so, as that was the wish of the author, but “he who commits the offense of selling or loaning with deposit, will be damned by the G-d of Israel”.

We don’t know exactly who was cursed with eternal damnation, but one thing is certain: the manuscript was sold. Edward Pococke served as the priest of the English community in Aleppo during the years 1630-1634. While there he purchased the “Nezikin” and “Kodashim” (Holy Things) sections of the manuscript, taking them with him when he returned to England. He would later publish some of the material in a book in 1655.

Robert Huntington served in the same role as Pococke in Aleppo later that century. He managed to acquire the “Zeraim” (Seeds) section of the Commentary dealing with prayer and agricultural laws. Huntington sold this segment to the University of Oxford in 1693, which also purchased Pococke’s collection during the same year, meaning the university was now in possession of three of the six orders of the Mishnah with commentary by Maimonides in his own handwriting. We know nothing of the “Tohorot” (Purities) section of the manuscript, which vanished somewhere in Syria and was lost to the mists of time.

In the early 20th century, Rabbi Ya’akov Moshe Toledano purchased the “Moed” (Festival) and “Nashim” (Women) sections of the manuscript from a “simple Jew” in Damascus. He sold them in 1908 to the famous collector David Solomon Sassoon. Sassoon’s impressive collection of Jewish manuscripts and books gained fame throughout the research world. In the 1970s his descendants decided to sell parts of the collection and in 1975, the two Commentary sections were put up for sale at a Sotheby’s auction in Switzerland. While the National Library had great interest in the purchase, the set price was too high. The Israeli Minister of Education at the time, Aharon Yadlin, called on volunteer groups, philanthropists, Jewish representatives from abroad and the general public to contribute to the purchase of the manuscripts from the Sassoon collection. Eight items were purchased, among them the handwritten Maimonides Commentary sections which were transferred to the National Library of Israel for safekeeping.

So how do we know that the manuscript was written by Maimonides himself? Perhaps it is a later copy made by a student or relative?

First of all, the handwriting in the manuscript is identical to examples of Maimonides’ handwriting which appear in the famous Cairo Genizaי. Another clue is the fact that the text is full of erased words and corrections. Who is the one person in the world who would dare to correct the words of Maimonides? That would be Maimonides himself, of course.

Therefore, it must be Maimonides’ personal first version. It includes corrections on almost every page.

Over the years Maimonides updated the manuscript many times. After studying various sources he chose to erase certain parts and make corrections. He even added bibliographic references to external texts that he had written himself. In a letter to one of his students, Rabbi Yosef Bar Yehuda, Maimonides admitted that he was capable of mistakes and always sought to correct his own thought and work once new knowledge was gained.

In another case, a group of students pointed out a certain contradiction between the text of Maimonides’ Mishnah Commentary and his later work, the Mishneh Torah. Maimonides responded by noting that the students had seen one of the earlier versions of the Commentary and that he himself had changed his mind and corrected the text later on. Now that this very text is kept at the National Library, we can see Maimonides’ own internal deliberations and decisions as they are expressed in the manuscript.

and click here to take a journey around the world with Maimonides!