Merian was a scientist, researcher and naturalist who documented the world of insects, followed their lifespans, and revealed the truth of how insects come to be in the world. 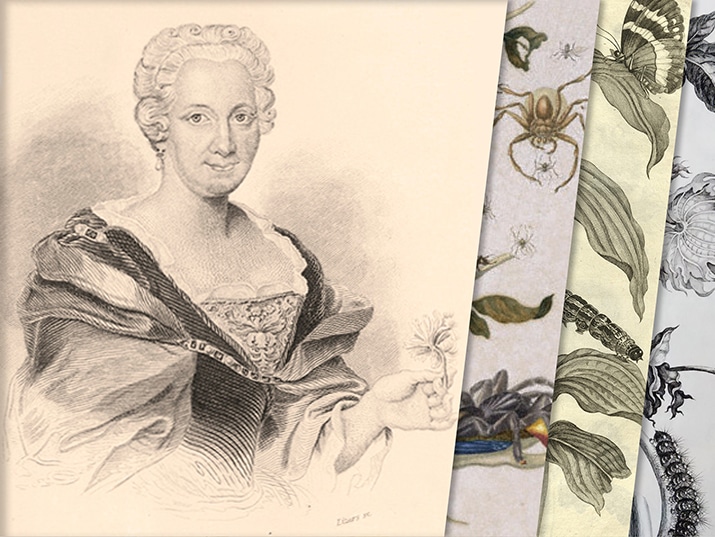 Picture of Maria Syblla Merian from the Edelstein Collection at the National Library of Israel.

Maria Sibylla Merian (1647-1717), is best known today for her paintings of nature. In truth, she was an important German scientist and researcher of nature. Her works dealt with zoology and botany, and her beautiful paintings, which brought her observations to life, actually served as a method of documenting her research.

Maria was born to a well-known family of map printers and publishers in Frankfurt, Germany, then a center of art and the silk trade. Her father died when she was very young and Maria was raised by her mother and her mother’s second husband, a Flemish painter named Yakov Marl. Marl, who specialized in still life paintings of tulips, recognized Maria’s talent and nurtured it from an early age. He was the one who initially endowed in her the love of painting flowers. Maria studied drawing, engraving, painting in color, and the art of print from an early age – she made her first copper print at the age of eleven.

Maria collected, observed, and captured the birth and life cycle of insects through her painting. She discovered and recorded how they transformed from egg to larva, from larva to cocoon and, finally, to adult insects. Until her research came to light, her contemporaries and those who had taught them believed that insects were spontaneously created from garbage,  since they were usually found near it. Maria’s discovery was part of a worldwide revolution in the disciplines of biology and zoology and laid the foundations for an expansive catalog of insect species. What had begun as Maria Sibylla Merian’s childhood hobby became her life’s work.

When she was eighteen, Maria married her stepfather’s pupil and moved with him to Nuremberg. Her husband, a gifted painter himself, was fascinated by Maria’s work – he supported it and published her collective works. They had two daughters together: Dorothea-Maria and Johanna-Helena. Maria taught both of them to draw and write from an early age. Following the death of her stepfather, she went to visit her mother and decided not to return to Nuremberg. At the age of 34, raising two daughters alone, she moved to Holland to live among the Labadist Protestant community. Her mother joined her and they lived there for several years among artists and scientists who all devoted themselves to a rigorous lifestyle of hard work. Maria worked there as a printer but she had little time to paint.

In 1695, she decided to leave the religious community and move with her daughters to Amsterdam, a city full of life, art and commerce. She was the sole breadwinner of the family, working as a painter, merchant, and publisher. She continued to be renowned for her paintings. Later, her daughters worked with her as well. The stories, people and souvenirs that reached Amsterdam from the overseas Dutch colonies began to arouse Maria’s curiosity and nourish her imagination. Her heart ached to travel far from Amsterdam – to explore not only the world of insects and plants near her but to wander far away and discover the world.

So, in 1699, she embarked upon the journey of a lifetime- an excursion to Suriname in northeastern South America. She was 52 years old at the time and was joined by her youngest daughter, Dorothea, now 21 years old.

African slaves had been brought to the Dutch colony of Suriname and were forced to grow cocoa, coffee, sugar cane, and cotton. Maria arrived there with crates filled with paints and canvas. Her intention was to explore the natural life of the place and record it with paint.

Maria’s attitude toward the locals was different from that of the other Dutch and foreigners arriving in the colony. She was horrified by the cruelty imposed upon the slaves and interested in the local indigenous people, wanting to learn as much as possible about the untamed nature they called home. She followed the slaves and natives to the hiding places they had found in the forests. There, she grew to intimately know the animals, plants, and insects of the place. The women showed her the local plants and told her about their uses. One plant, for example, could be used in certain doses to expedite labor, but in high doses, it caused miscarriage and even death.

Maria had not come to tame nature like the colonists, nor did she want to portray tamed nature in her paintings. Her paintings of Suriname captures nature in all its savagery – birds eating insects, giant spiders eating birds. Maria had become far estranged from the still life paintings of beautiful flowers on which she was raised. After two years of uninterrupted work in Suriname, Merian fell ill with malaria and was forced to return to Holland. She returned with drawings and illustrations, samples of insects and a maid. Yes, although Marian was in many ways a revolutionary woman, she was also part of a culture of exploitation and human-trafficking.

Her works from Suriname were compiled into a book entitled, Metamorphosis Insectorum Surinamensium. Published in 1705, it is considered to be her most important work. It contained 60 pages of illustrations, the result of her research and painting. The illustrations were painted by hand and were full of life and beauty.

Upon her return to Amsterdam, Maria earned a living painting and selling the insects she had brought with her from Suriname. In 1715 Marianne suffered a stroke and had to be nursed by her daughter, Dorothea. She died in 1717.

Maria Sibylla Merian was exceptional among the women of the 17th century. She is one of the few women that succeeded in breaking the glass ceiling of her time and, in the process, earned a place of honor in the pages of science, art and human history. Thanks to Chaya Meir Har of the Edelstein Collection for her help in composing this article.