How European Jews Spent Their Summers Before the Holocaust

From lake houses to spa days, Jews from all over Europe took full advantage of their summer vacations, building memories that would last a lifetime. 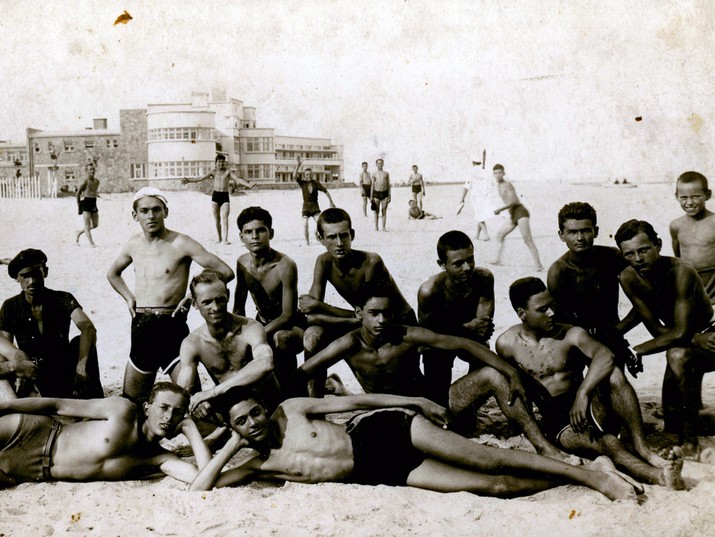 In 2000, Centropa set out on a mission to interview and collect stories and photographs from elderly Jews living in Europe. Interviewers spent up to twenty hours with each respondent, asking them to paint a picture of the world they grew up in and the world they rebuilt for their families following the Holocaust.

Many of the interviewees shared beautiful memories of how their families would spend their summers, vacationing in different countries, eating specific foods and spending time together, building these memories that lasted a lifetime.

Rosa Rosenstein and her siblings spent their summer in Bad Buckow.

“Here you can see me with my siblings,” said Rosa. “As you know, Berlin has wonderful lakes. On Wednesday we always went out in paddleboats, and we also went canoeing. I couldn’t swim, but we went rowing. I started learning swimming three times but gave up after the third time. When I tried for the first time, the swimming instructor held me on a fishing-rod and I had to do the movements. The second time, I got a board and I had to push that board ahead of me. In the end, the instructor said, ‘And now without the board.’ That I didn’t do. I was a coward. I was afraid, I do admit, but such is life.

During the summer my parents rented a summer apartment. When we were still small, we spent our first summer vacation in Fichtenau by a lakeside. We took beds and dishes with us. My father came to join us on weekends. He was working while we spent the time with our mother. Mother cooked, and we – just like at home – ate noodle soup.”

Piroska Hamos shared, “This picture was taken somewhere on the banks of the Danube, but where exactly, I don’t know. Maybe on Szentendre Island, because we went there many times. We often got together with my cousins. They also lived in Matyasfold, the two houses were close by, 5 minutes apart.

My cousins were friends with my husband – relatives, and friends as well. I liked them very much, they were intelligent, well-educated, well-read people. They graduated from secondary school. Back then, it was a big thing if someone graduated from secondary school. They were not married yet, at that time. They were even angry with my husband because he was the first one in the boat group, who got married.

They owned a boat together, and they rented a space for the boat at the first boathouse, next to the Ujpesti Osszekoto bridge. The owner of the boathouse was called Magashazi. As soon as the weather started to be good, they went to lacquer it (the boat) and put it in order. When I joined their group, then I also went along to tidy up the boat and every weekend, we went rowing on the Danube, in two boats.”

Foraging as a Family: Czech Republic, 1932

Chava Pressburger said, “During longer holidays and summer vacation we would always go outside of Prague with our parents. At Christmas and Easter, we would go skiing in the mountains, while summer vacation we spent in the countryside, where our parents rented a bungalow. One place was named Radosovice. It was close to Prague, and our father would come to visit us on the weekends. We were there alone with our mother and the maid. We would go swimming, for walks, picking mushrooms in the forest and so on.”

Matilda Cerge spoke about spending her vacation at the Vrnjacka Spa.

Once, when I was five years old, I went with my grandmother to the spa. Grandmother was very worried that her granddaughter shouldn’t go hungry. We were in a hotel and we had normal meals there. But, it wasn’t enough for her. So she went to the farmers’ market early in the morning to buy kajmak, the wonderful fresh cream that they make there and fresh lepinja, flat rustic bread. She went to buy these things to ensure that her granddaughter didn’t lose one gram.

While she was at the market I was locked in the hotel room, so that I wouldn’t go anywhere. While I sat there in the room, bored, waiting for grandmother, I sat by the mirror and started to twist a brush into my hair. When grandmother came she couldn’t untangle the brush and in the end, she had to cut my hair. Her granddaughter, her beauty, instead of having lovely curls, was deformed, with one side longer than the other side. She only cut the one side, the other side she left as it was.”

“This photograph was taken in Bugaz [currently Zatoka in Ukraine], in a boy scouts camp in 1936. The tuberculosis sanitarium is visible in the background. At 16, my school sent me to the seaside [by the Black Sea]. I was sent there three times. The third time, the reason was the good job I had done as head of my group at school. This was what led the director of the camp, Dr. Dumitrescu, to summon us there.

I saw the place where the Dniester River flows into the sea [today part of Ukraine]. The water there was clearer than a spring’s, and the beach was very wide, with sand dunes in which the foot would sink. When we had to return to the camp at noon, after having frolicked for hours, we couldn’t walk, but we had to run like crazy to reach the ground because the sand was too hot to walk on. Another nice thing about that place was that there were some very small mollusks in the sea, which died once they were thrown on the shore.

In the evening, we would walk on the shore and find phosphorescent lights – the sea was full of shiny little stars. My boy scout’s hat had a sort of lyre-shaped lily on it. I would put these small crawfish on it, and my hat would glow in the dark. I enjoyed scouting very much.

We slept in tents. The tent was partly buried in the sand so that the wind wouldn’t blow it away and the tide wouldn’t drag it to the sea. Some ropes tied it to stakes. There were pretty tall weeds growing there, and we used them to make the base of our tent. We put the tent sheet over it, we stuffed the pillows with weeds, and this was our bedroom. I stayed with the other two heads of groups in a tent of three. Others stayed in tents of six, eight or ten.”

Toman Brod said, “We used to spend our summer holidays at the summer house in Libverda. In the summer we used to go to a summer house. If I remember correctly, in the beginning, it was only around Prague, when I was a small child we used to for example go to Revnice. The first bigger holiday event was Doksy, Mach Lake, then for a few years it was Libverda, that’s near Liberec, where we went for about three years, but because it was in the border region, where it wasn’t all that pleasant to be in the 1930s, we spent our last summer vacation, in 1938, at Mala Skala near Turnov.

We would always go there for two months, the two of us, our mother, the cook, and the nanny. Our father had work, so he wasn’t there regularly, he would come when he had the time, and then would again leave for Prague. Besides us there were also other families there, some three, four would always be there. They were Jews. Some of them were our relatives; some were more distant relatives with whom my mother was in closer contact than with her own. They were women that played bridge with her, and who had children, so we spent our summer vacation with them, we knew them from childhood. We spent beautiful, calm, secure times together.”

This article appears here as part of Gesher L’Europa, the National Library of Israel’s initiative to connect with people, institutions and communities across Europe and beyond, through storytelling, knowledge sharing and community engagement.

A Shattered Childhood: Memories of Kristallnacht