It was only when Leo saw the smoke from the crematorium that he understood that he would never see his father again. 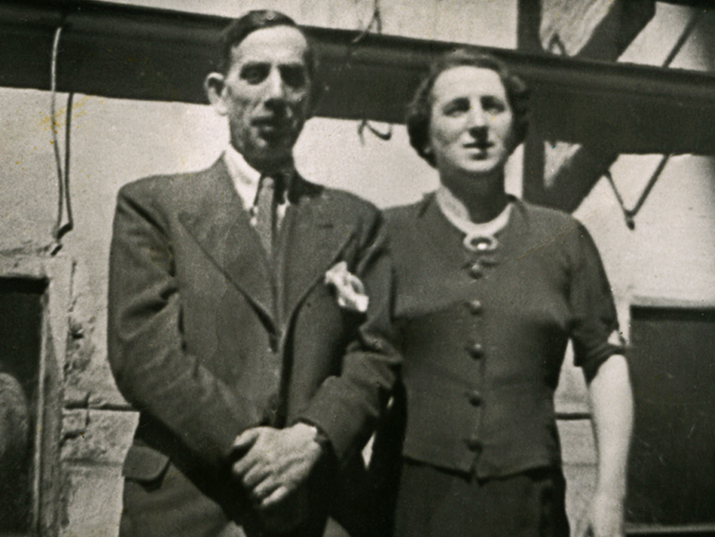 Before the First World War, Vienna, the seat of the old Habsburg dynasty, was the capital of a great multi-ethnic empire brimming with culture, art, and history. It’s where more than 175,000 Jews lived including textile salesman Moshe Luster and his wife Golda.

Moshe and Golda were married in Vienna in 1919 and in 1921, their first child, Helli, was born. Six years later, their son, Leo joined the family. The Lusters lived, like many other Jewish families, in Vienna’s second district, on 12 Schreygasse Street which was a Jewish world of its own. The children attended a religious school and the family attended the local synagogue on Shabbat and holidays. The Lusters enjoyed the cultural experiences Vienna had to offer and particularly loved going to the theatre together to watch the comedic films of the era. But as the years went by, the Lusters learned that the Jews had nothing to laugh about.

Moshe and Leo Luster were in the synagogue for traditional Shabbat prayers. On their way home, a neighbor stopped Moshe on the street and said, “Mr. Luster, something terrible has happened. Chancellor Schuschnigg (Chancellor of the Federal State of Austria) has resigned.” Moshe Luster knew at once: this was the beginning of the end.

The Austrian military had been instructed not to resist and the next day the Germans marched on Austria. The Viennese public quickly took up the cause and began wearing swastika armbands. Soon after, the Jews of Austria became a hunted minority. The beautiful multi-ethnic metropolis that was Vienna ceased to exist as the Nazi party took over the country and occupied all government functions.

The country’s Jews, including Moshe Luster, lost their jobs, their apartments, and their dignity. Eight months after the initial invasion of the Germans, the pogrom of Kristallnacht brought out the worst in a nation that had once been so accepting.

Moshe, Golda, and their children watched as their Viennese neighbors rioted.

They stood helplessly by as they burned synagogues and destroyed Jewish shops.

Thousands of Jewish men were arrested – Moshe was among them.

He was eventually released by the Nazis but was given strict orders not to speak of the horrors he experienced at the hands of his imprisoners or risk further trouble.

From December of 1938, the Jews were segregated from the rest of the city. Jewish children were required to attend separate schools and were not allowed to play in public parks. The Jewish community found the only solution available – they opened the Jewish cemetery as new playgrounds for the local children.

With their synagogue lying in ruins, the Luster family was forced to hold Leo’s bar mitzvah quietly in the family home, with the curtains drawn tight.

Jews began frantically fleeing Vienna, taking refuge wherever it was offered. Moshe managed to get Helli out of the country and sent her on her way to the Land of Israel. Leo and his parents were not so lucky.

On 24 September 1942, the Nazis deported Moshe, Golda, and Leo from Vienna. Leo was just 15 years old when he was forced into a crowded train car for the two-day journey to Theresienstadt

Terezín was originally built by Emperor Joseph II as a fortress in the 1780s, and after 1918, it was used by the Czechoslovakian army. The Nazis turned it into the Jewish ghetto of Theresienstadt and filled it with tens of thousands of people forced to live in squalor.

Leo was put to work in the kitchens. While the work was labor intensive, he was grateful to have enough to eat. Sometimes the youth was even able to smuggle rations out of the kitchen to his parents. Leo would watch as people were hauled out of the Ghetto in train car after train car. On September 28th, 1944, Leo, Moshe, and 2,500 others were added to the transport list.  Golda was left behind to fend with fates unknown.

Moshe and Leo spent two days traveling in a cramped cattle car. The train stopped suddenly in the middle of the night and the men were forced out of the car into a brightly lit area surrounded by electric fences where they were stripped of all their belongings. One by one they were forced to stand in front of an SS officer.

“What is your profession,” the officer asked Leo.

Leo was sent to one side, Moshe to the other. It was only a few hours later, when he saw the fires from the crematorium, that he understood that he would never see his father again.

Three weeks later, Leo was sent to a labor camp in Gliwice where he was forced to repair train cars. A few weeks later, on January 18, 1945, the SS officers gathered their prisoners and forced them to march through the terrible conditions of the dead of winter, barefoot and in tattered clothing. Those who could not go on were shot and left for dead.

Finally, they stopped marching. They had arrived at a camp called Blechhammer. The SS officers locked their prisoners in the barracks and set fire to the buildings. Those who tried to escape were shot. But Leo managed to hide and avoid the inferno that claimed the lives of his fellow prisoners.

After some time, Leo dared to sneak out of his hiding space. The Nazis were gone and Leo set off, walking along the street that led out of the camp in search of help. He came upon a group of trucks with red stars on their hoods. A Russian soldier approached him and Leo shouted out in Yiddish: “Yid, ja. Yid, Yid.” – I am a Jew.

The soldier looked at him and said, “Ja tosche Yid.” – I too am a Jew.

Leo guided the soldiers back to the smoldering ruins of the camp. The soldiers gave the surviving Jews food and water and cared for them. A few weeks later they made their way to Krakow, where they received identification documents from the Red Cross.

One day, a Russian officer turned to Leo and said, “The war is over, you can go wherever you want.”

Leo had but one mission in mind: to find out what became of his poor, beloved mother Golda who had been left behind to fend for herself.  He set out on his journey to Theresienstadt. He traveled by train and through the kindness of others who were willing to pick up a refugee hitchhiker. He arrived in the newly liberated Ghetto and immediately sought out those who would have information on Golda’s whereabouts.

“Where is your father?” she asked. For more on the story of Leo Luster, please visit the Centropa website. This post was written as part of Gesher L’Europa, the NLI’s initiative to connect with Europe and make our collections available to diverse audiences in Europe and beyond.