Why did the famous writer decide to study Hebrew? And what did he document in the Hebrew notebook he kept? 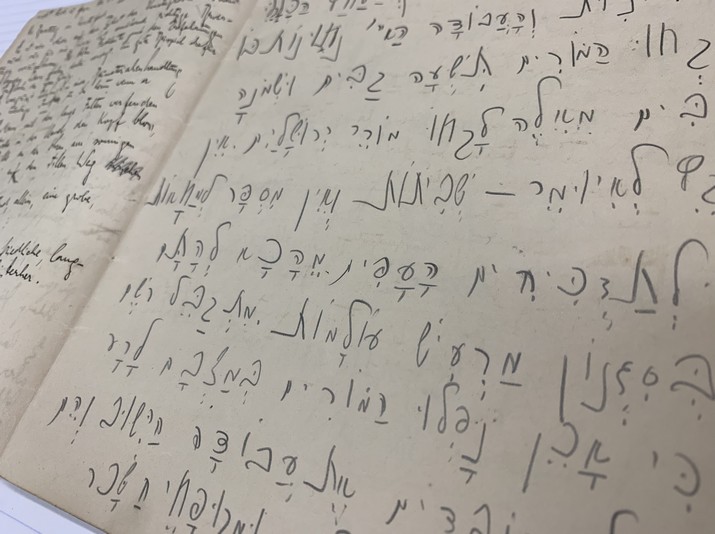 1917 was a fateful year in the life of Franz Kafka. In that year, the same year he was diagnosed with tuberculosis, Kafka began teaching himself Hebrew. When his friend Max Brod heard about this, he was stunned. How was it possible that for over six months his close friend had been studying Hebrew without telling him—a Zionist activist planning on immigrating to Palestine? The discovery led to a broad correspondence in Hebrew, in which the Czech-Jewish writer and lawyer sought to practice his Hebrew with a more qualified speaker than himself.

If at first Brod viewed his friend’s decision mainly as an attempt to entertain himself intellectually, the more Kafka deepened his study of the language, the more his interest in Zionism and in his Jewish roots grew. In addition to his desire to read the Bible in the original language, he was becoming more interested in the Socialist stream of Zionism. He followed a number of Zionist journals in German and made sure to keep up on the news of the Second Aliyah (Jewish immigration wave) to the Land of Israel.

We find evidence of this in one of Kafka’s eight Hebrew notebooks, which were recently received at the Library as part of the estate of Max Brod, at the end of a long legal process (which you can read about here). Besides the list of Hebrew vocabulary words and their German translations, in the “Blue Notebook,” Kafka documented the teacher’s strike in Mandatory Palestine in November 1922. This record enables us to date the notebook—two years before his death from tuberculosis in Klosterneuburg, Austria. At that time, Kafka’s Hebrew teacher, a young woman named Puah Ben Tovim, from the Hebrew Yishuv in the Land of Israel, had arrived in Prague with the aim of studying medicine. Even when Kafka’s health began to fail, he continued pursuing his Hebrew studies.

Kafka wrote (in Hebrew!) to his teacher Puah:

…from the heavy and deep sighs that arise from the economic pressure that Zionism and the workers of the Land of Israel are under. The teachers took nine measures and eight of these measures were taken by the teachers of Jerusalem. There is no end to the threats of strike or protests and deafening reminders [?] flying from all around. There is the impression that the teachers have fallen into the worst situation of all the workers in the Yishuv and they are the only ones who are suffering and deprived of wages. The question of teacher salaries has become the central and burning issue. As if here begins and ends the entire episode of suffering and difficult struggle of this helpless period. 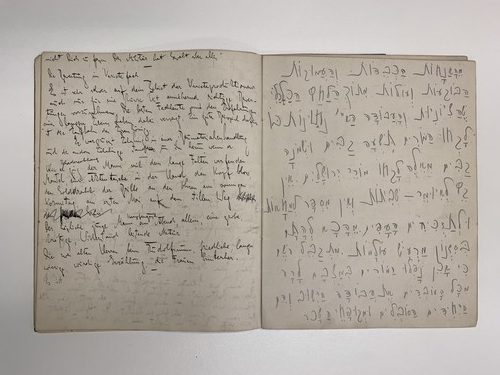 The turning point came in the last year of his life, 1924, when he told his beloved, Dora Diamant, about his plans for the future: to settle in the Land of Israel and open a restaurant that would serve the Zionist pioneers. The plan was amazingly simple—Dora would be responsible for cooking the food, and he would serve as the restaurant’s waiter and manager. The plan he concocted probably sounded to Dora like another of the many stories he liked to tell his friends. However, it might have contained more than just a wish: A year earlier, Kafka corresponded with his friend from his university days, the philosopher and educator Samuel Hugo Bergmann and his wife Elsa, about the possibility that Kafka might accompany Elsa on her journey back to Mandatory Palestine.

In fact, though Bergmann had given his consent, he tried to evade his promise to Kafka with various excuses, all fairly reasonable: he told his wife that he preferred that Kafka wait a while longer in Europe. That the house was too small, he would have to sleep in the children’s room, and mainly, that Kafka was too sick for the arduous journey and difficult conditions he would encounter in the Land of Israel.

In the end, his precarious medical condition put an end to any possibility of his traveling. When it became clear that tickets for the ship he had planned to sail on with Elsa were sold out, he told her not to pay too much attention to his plan to accompany her because it was nothing more than the fantasy of an ill man. He did not, however, rule out the possibility that he would visit them when his health improved.

Kafka spent more than seven years studying Hebrew. His plan to open a restaurant in Palestine was probably nothing more than a pipedream, but his desire to see the developing Hebrew community with his own eyes and to speak the language of the local pioneers remained unchanged until his death.

He never made the journey because he died on June 3rd, 1924 in the sanitarium in Klosterneuburg. The Czech-Jewish writer was laid to rest in Prague, where he lived most of his life and where he wrote most of the works that have granted him eternal fame.

You can now browse through Franz Kafka’s “Blue Notebook” on the National Library of Israel website, here.