The Jewish Connection of a Jamaican Almanac 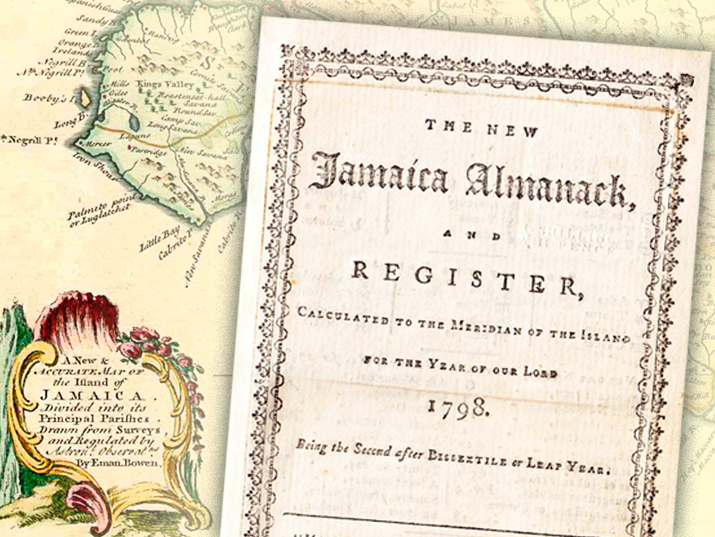 Towards the end of the 18th century, an almanac intended for traders was published on the island of Jamaica. It contains a special page dedicated to the holidays and festivals of the Jewish calendar. The Hebrew years 5558 and 5559 are cited near the top of the page, with the line “Every Shabbat throughout the year” appearing just below and alluding to the fact that every Shabbat is a holy day observed by those of the Jewish faith. Further down the page, the Jewish months, holidays, and festivals are noted: Purim, Pesach, Shavuot, Tisha B’Av, Rosh Hashana, Yom Kippur, Sukkot, and Chanukah. Fasting holidays are also included: the Fast of Esther, the Fast of Tamuz, the Fast of “Guedalya”, and the Fast of “Tebeth”.

The British had captured the Caribbean island from the Spanish crown some 140 years before the publication of the rare almanac. The island’s Jews played an important role in the early stages of local British rule.

A small Portuguese minority lived on the island whose members were hated by the Spaniards, largely due to the fact that many of them were in fact Conversos (Sephardic Jews forced to convert to Christianity) who had immigrated to the New World in an attempt to escape the grip of the Spanish Inquisition. Thus, the Converso Portuguese were only too happy to help the British capture the island by feeding them valuable intelligence.

As fate would have it, in the same year that the British captured Jamaica (1655), Oliver Cromwell granted the Jews permission to resettle in England. This important development meant that Jews could now immigrate freely and openly to the English colony of Jamaica while the local Coversos could return to the free practice of Judaism without fear of persecution by the authorities.

Prior to the English seizure of the island, Jamaica was already an economic success story. The island produced copious amounts of sugar and its derivatives (relying, of course, on African slave labor, forcibly imported to the island). Over the years, as British rule took hold, Jamaica became an important commercial center for gold, silver, and precious gems. It was also a hotbed for piracy against Spanish ships crossing the Caribbean Sea on their way to Spain.

But let’s get back to the rare almanac acquired by the National Library:

Almanacs of the day were usually thick journals or small books that contained useful information for the calendar year. This almanac is entitled The New Jamaica Almanack and Register, and its content indicates that its target audience consisted of merchants who were involved in the maritime trade in Jamaica at the time. To this end, many of the almanac’s pages contain information about celestial bodies that were essential for navigation at the end of the 18th century.

It is quite evident that the printer who composed the almanac was not overly familiar with Hebrew. There are several glaring errors, presumably originating from the laying of individual letters one by one. Some of the letters appear out of order and some are altogether incorrect. For example, the nonsensical phrase “רח פכת” appears in place of “רח טבת” (meaning “The first of the month of Tevet”). In the case of the festival of the Jewish New Year, Rosh Hashanah (ראש השנה), the printer completely confused the order of the letters, resulting in the non-existent word “אשנההשר-” (“Ashanahhashar-“). The printer also apparently lacked the letter “י” (“yud”) in his collection, and opted to use an apostrophe in its stead – similar perhaps, but noticeable.

The Jamaican almanac’s curiosities extend beyond the page dedicated to Jewish holidays and festivals. This almanac was designed as an ever-evolving composition, a collection of information gathered over decades. We can track the life of the leather bound book by flipping through its pages: the dedication written by a man who gifted the book to his brother, documentation of its receipt in 1799, as well as various drawings and notes scrawled on the blank pages that were intentionally left at the end of each month. Different hands recorded events that occurred in the years following the printing of the almanac: the death of a beloved servant, repairs on ships in the harbor, and the strange remark – “I heard the cuckoo” – recorded twice in the same handwriting, in the month of April, in different years. May’s page is empty, perhaps because it is a month typified by rough seas and fierce storms in the Caribbean. Toward the end of the almanac, more pages were initially left blank but were later filled with fragments of Christian literature and hymns by the various owners of the almanac. One of the pages features a quote from Voltaire in French. The handwritten additions were all recorded in a beautiful cursive script, still easily readable today.