A New School Year for the Children of Europe

In honor of the "Back to School" season, we bring you several stories about children from across Europe on their first day of school. 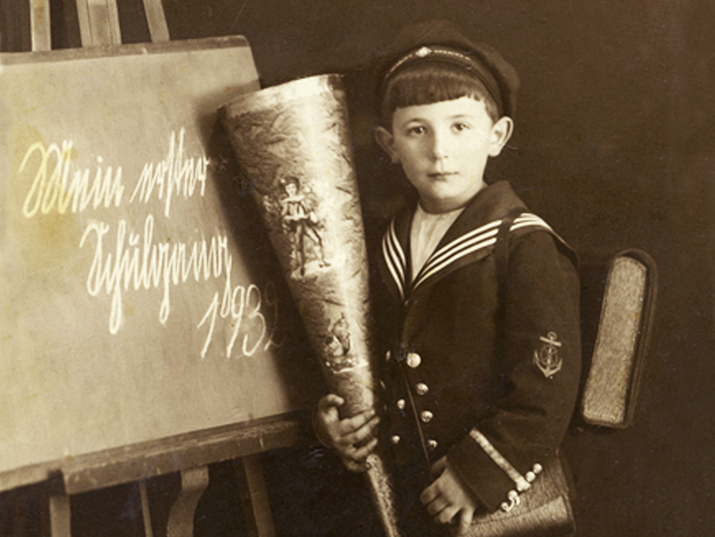 Hillel Kempler on his first day of school, 1932. Photo courtesy of Centropa.

Starting school for the first time is a rite of passage – a child moving on to the next stage in life begin his or her studies in a formal setting, leaving the comforts of home behind for the great big world that lies beyond.

Germany: A Cone of Sweets for the Sweet New Pupil

In Germany, there is a custom that dates back to the early 18th century, where parents, grandparents or godparents would present a young child starting school for the first time with a Schultüte, a large paper cone filled with sweets, as a way to alleviate some the anxieties that come with new beginnings.

While over the years the contents of the cones have shifted to more practical gifts such as crayons and pencils, the tradition has held strong for both Jewish and non-Jewish children in Germany. These cones create a sweet memory on the first day of school, sending the child off into the big world of a new school with a smile and a happy heart.

Hillel Kempler remembers his first day of school as a seven-year-old lad in Berlin in 1932 fondly thanks to this tradition. “I was enrolled in elementary school in Gipsstrasse in 1932,” said Kempler.  “Of course I received a cone of sweets for this event, as it was customary in Berlin back then. Both Jewish and non-Jewish kids received it.”

“I do not know how many children in my class were Jewish,” Kempler explained. “That did not interest me at the time. Before I came to school, I could already read. I have always loved reading. I read anything that came to my hands. And when I went out on the street, I read the signs at the shops. Maybe it was thanks to my brothers and sisters, who always gave me newspapers and journals. I was in Berlin for only half a year, and I still read German well today, which is amazing.”

Hillel also remembers his sister’s first day of school in 1929 – a day that was, of course, marked with a cone of sweets. “Miriam came to school two years before me. She was more of a frightened child, always hanging on the apron of her mom, as they say. Everything was an adventure for me, everything was a difficulty for her.”

Eva Duskova remembers her first day in school fondly. After being walked to school by her father, she found herself hungry to learn – at least when she remembered to listen to the teachers instead of creating trouble with her best friend, Anita during class.

“I remember my first day of school,” said Eva. “I went to the first grade with my girlfriend Anita Frankova, nee Fisherova. We had known each other since the age of four because our parents were friends… In fact, back then we insisted on sitting next to each other in school. And in the end, we did. Of course, right the next day we were separated for misbehaving. We were simply talking to each other. What the teacher was saying wasn’t as interesting. But I very much looked forward to school, I was hungry for knowledge.

The first day Anita and I were accompanied by our fathers. I know that the gentlemen in the back behind the desks stood beside each other, and I think that they were quite amused. I think that our fathers took it as this personal prerogative. Whether there were mothers too, that I don’t remember. Very early on I went to school unaccompanied, because it was a short way off, without any sort of danger along the way.

I very much loved going to school. Summer holidays always took too long for me, I couldn’t wait until I could go to school again. I liked studying, in elementary school I had, I think, liked everything. Perhaps less counting and more grammar. And I had a hard time coping with drawing. And in high school, I loved all the humanities, while the natural sciences remained somewhat foreign to me. Though I must say that even so they interested me and I liked studying them.”

Latvia: Connecting with the Hebrew Language

Mera Shulman describes her time in a Jewish school in Riga as a beautiful time in her life where she learned to love learning – despite losing nearly all of her classmates in the Holocaust.

“I went to school when I was seven. I started from the second form at Jewish Hebrew school. At that time, it was common to skip the first grade, if you were well prepared. I studied perfectly well. Everything was interesting for me, I cannot name my favorite subject, I liked them all, except history. In history, I also had an excellent mark, but it was the most laborious one.

She loved her teachers and appreciated them for their specific specialties and what knowledge they could impart.

“Our teacher Korz was very talented for music. Under his guidance, we played a Haydn symphony using pipes and penny whistles. He did his best to invent something unusual for each holiday. In the second form, we put on a very interesting performance, ‘Alphabet.’ I was the shortest, and he gave me [the Hebrew letter] Yud because it was the smallest one. But at the same time, it was explained to me that the words Jew and Israel began with that very letter. [Yud is the tenth letter in the Hebrew alphabet, in its written form it is only a small line. In Hebrew both Yehudi (Jew) and Israel start with Yud.] I was very proud to get that remarkable letter.”

Later in life, after surviving the war, Mira could still remember her teachers with great fondness.

Not only did Mira not experience any anti-Semitism in school, she couldn’t even imagine such hatred ever infiltrating the walls of her classrooms.

“Certainly, at this sort of school, there were no anti-Semitic manifestations (and it had no possibility to exist there). By the way, the teacher of the Latvian language, Madame Frei (a Latvian) used to say that she liked Jewish children very much and preferred to work with them.”

This post was written as part of Gesher L’Europa, the NLI’s initiative to connect with Europe and make our collections available to diverse audiences in Europe and beyond.   If you liked this article, try these: How European Jews Spent Their Summers Before the Holocaust Love on the Wings of a Paper Airplane A Shattered Childhood: Memories of Kristallnacht