The Doctor Who Treated Herzl in Exchange for an Autograph 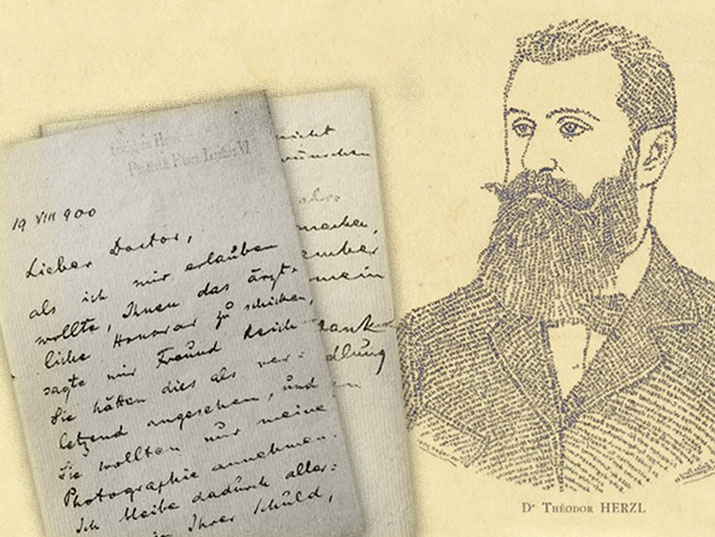 On our wall at home hangs a framed facsimile of a letter and a signed photograph of Theodor Herzl. It’s a treasured heirloom, copies of which are held by various members of my wife’s family. The inscription on the photograph dated September 1900 translates as:

London was the setting for the fourth Zionist Congress. This was the first time that the gathering had been held outside of Basel, Switzerland. The suggestion to take it to London was not one that Herzl had at first been enthusiastic about but he changed his mind for two reasons: Firstly, with the recent arrival of many Jews in London due to pogroms in Romania, Herzl saw in the plight of these immigrants an opportunity to highlight the need for a Jewish homeland, since the solution of charity from anti-Zionist Jews was clearly not working. Secondly, he felt that the movement had outgrown Basel and identified that the message of Zionism could be broadcast widely through reports published by the British press across her current and former colonies.

As Herzl announced in his opening remarks to the congress:

“England, great England, free England, England that looks across the seven seas, will understand us and our aspirations. From here the Zionist idea will fly ever higher; of this we may be sure.”

More than this strategic objective, Herzl, it would appear, was something of an Anglophile, or at least, he knew how to flatter his hosts. In an article published in Die Welt in early June of that year, he enthusiastically welcomed support for holding the congress in London expressed by the Jewish Chronicle, hitherto ambivalent about the Zionist cause. In response to the newspaper’s suggestion that British Jews will benefit from the congress coming to London, he wrote:

“We shall go even further and express our belief that the non-English Jews will have far more to gain from this encounter because they will absorb good English manners, the honesty of all the discussions, and the advantages of a mature, advanced culture. They will keep all these as precious memories.”

I wonder if he would say the same today…

Nonetheless, there was every chance that the English audience might never have heard Herzl speak because, when he arrived in London on August 7, 1900, he was suffering from a high fever and spent the initial days of his visit confined to his bed at the Langham Hotel.

In the days prior to the congress, Herzl called for a physician, but he was particular about who he would allow to treat him. The doctor had to be Viennese trained and be a Zionist. It’s doubtful that you could count the number of people in London who fit those criteria on one hand, but somehow, a doctor named Leopold Liebster was found in London’s East End where the country’s largest population of Jews lived.

Under Dr. Liebster’s care, Herzl recovered sufficiently to extract himself from his sick-bed to attend a rally of the English Zionist Federation on August 11th. Herzl was greeted by thousands of enthusiastic supporters eagerly anticipating their leader. He also managed to attend a garden party in Regent’s Park on the 12th, and the opening of the congress the following day.

Herzl’s popularity amongst London’s Jews dated back to a visit some four years earlier when he came as a guest of the Maccabeans, a friendly society of Zionists, whose support for Herzl’s goal of a Jewish homeland in Palestine was significant for the movement’s growth in popularity across the world.

The Congress of 1900 was a great success in terms of its impact on the British media. The mainstream press was universally sympathetic to the cause. Perhaps most importantly, Herzl’s hope of gaining the favor of the British Parliament was achieved with most members expressing their support for the Zionist goal.

Following his treatment, Herzl offered to pay Dr. Liebster’s fee but the physician would hear nothing of it.

The letter that followed, sent on the 19th of August from the Langham Hotel reads:

When I attempted to send you payment for your medical treatment, our friend Reich told me that you were offended and that (as payment) you were only prepared to receive my picture.  Obviously I remain in your debt but nevertheless have no option other than to do as you request.

It will be my great pleasure in September to send you my picture from Vienna.

Warm thanks for your devoted care.

And so, in September 1900, the picture was duly received.

Herzl’s health continued to trouble him, and in early 1904 he was diagnosed with a heart condition. He died later that year from sclerosis of the heart at the age of 44. In 1949 his remains were disinterred and reburied on a hill in West Jerusalem that was, at the same time, renamed Mount Herzl. Also known as Har HaZikaron (the Mount of Remembrance), in 1951 the site was established as a cemetery for Israel’s leaders and fallen soldiers.