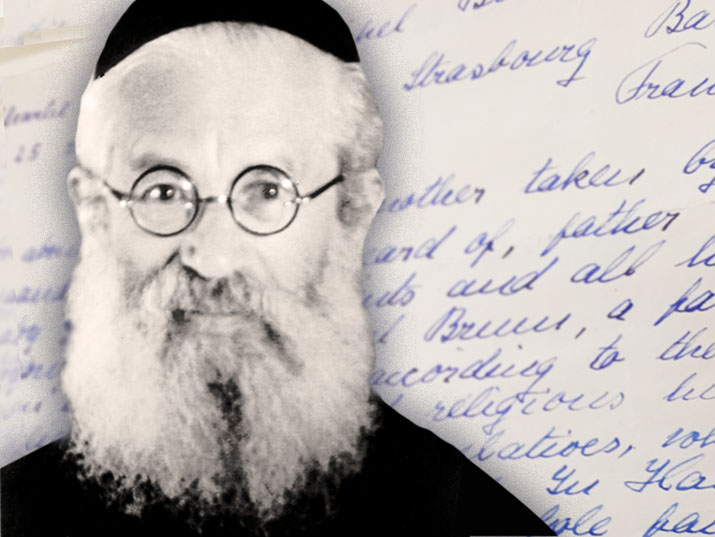 Yitzhak Halevi Herzog, the David B. Keidan Collection of Digital Images from the Central Zionist Archives

There is a legend told of Rabbi Yitzhak Halevi Herzog.

One day in 1946, Rabbi Herzog arrived at a large monastery which was known to have taken in Jewish children sent away by their parents to protect them from the Nazi terror which had ravaged Europe. Now, the time had come for the children to return home.

The Rabbi turned to the Reverend Mother, thanking her for saving the lives of the children and requesting to receive them back to the Jewish People, now that the war was over. The nun was happy to agree, but asked the Rabbi – “How can you know which of the hundreds of children here at the monastery are Jewish?” After all, it had been many months since their parents had sent them there, and many had been mere infants at the time.

Rabbi Herzog assured the Reverend Mother that he would know. He asked to gather all of the children in a large hall, ascended the stage, and cried in a loud voice:

Sh’ma Yisrael Adonai Eloheinu Adonai Eḥad ! (Hear, O Israel: the Lord is our God, the Lord is One)

Immediately, dozens of children rushed to the stage, shouting “mama!” and “papa!” as tears filled their eyes. Many were sobbing uncontrollably. Though few of the children remembered much of their early lives, the sound of the Shema, the most famous prayer in the Jewish faith, instantly brought back memories of reciting these Hebrew words with their parents before bedtime.

When Yitzhak Halevi Herzog embarked on his famous tour of European orphanages and monasteries, with the goal of locating and retrieving thousands of lost Jewish children, he was serving as the Chief Ashkenazi Rabbi of Mandatory Palestine. He was recognized as an authority on issues of Halacha (Jewish religious law) and was held in great esteem by both religious and secular leaders around the world.

Herzog absorbed a variety of different cultures during his early life. Born in Łomża, Poland in 1888, his family moved to Leeds, England in his youth and then Paris, France, where Herzog attended the Sorbonne before continuing to the University of London. His groundbreaking doctoral thesis on the nature of the ancient blue dye known as Tekhelet, used during the Second Temple period, was what first made him a public figure.

In 1915, Herzog was appointed Rabbi of the city of Belfast and would later go on to serve for 14 years as the Chief Rabbi of Ireland. He became a supporter of the struggle for Irish independence and the Irish Republican Army. Eamon de Valera, a leader of the revolt against the British and a future President of Ireland, was a personal friend who at times used the Rabbi’s house in Dublin as a hiding spot.

Rabbi Herzog would also become a supporter of the Irgun Zvai Leumi (a.k.a the Irgun or Etzel), the Jewish underground group which fought against the British authorities in the Land of Israel, to which he finally arrived in 1936.

The plight of Europe’s Jews during the Holocaust tormented Yitzhak Halevi Herzog, and he devoted those years of his life to attempts to prevent the unfolding disaster. In April 1941, Rabbi Herzog was granted an audience with U.S. President Franklin Delano Roosevelt, whom he hoped he could convince to act, before it was too late.

According to Herzog’s biographer, Shaul Mayzlish, the Rabbi told FDR the following during their meeting:

I call upon his honor, as someone in a position of power, in the name of human conscience, in the name of human liberty, in the name of justice, to prevent the butchering of the Jews and allow the survivors the possibility of reaching safe havens[…] Mr. President, I am not the person who will advise you on how to deal with this terrible problem. I come only with a plea and also a warning. The plea – save what can be saved. The warning – those who stood by will be held accountable in the future.

Though the President promised Herzog he would hold a special meeting on the subject with his advisors, the Rabbi came away disappointed. He felt that FDR was much more concerned with other matters.

After the Allied victory in Europe in May 1945, Rabbi Herzog maintained his focus on the rescue of the continent’s surviving Jews. By his own estimate, at the end of the war, some ten thousand Jewish children were held in secret by Catholic institutions and non-Jewish families who had bravely taken them in for their own safety.

In 1946, Herzog embarked on a six month journey throughout Europe, with the goal of returning the Jewish children to their own families. Before he began the search, he stopped at the Vatican, where he sought the help of Pope Pius XII. The Rabbi came with a message of thanks for the crucial intervention of Catholic institutions in saving young Jewish lives, but also insisted that the children now be released, “Each child is like one thousand children, following this great tragedy,” he told the pontiff.

While Pius XII did not issue the sweeping public declaration the Rabbi was hoping for, the Vatican was indeed helpful in obtaining the release of many of the children.

During his European trip, Herzog visited France, Switzerland, Belgium, Holland, England, Poland, Czechoslovakia and Ireland. Much of the work he and his team faced was bureaucratic: They drew up updated lists of children with the help of the respective governments and local community institutions, and went about seeking Jewish organizations with the authority to assume legal guardianship.

Once the initial information was collected, it was often a matter of searching through individual villages and monasteries, while using the lists as guides. Volunteers from sympathetic organizations, both Jewish and non-Jewish, were instrumental in this effort.

There were many cases in which Christian families had formed strong bonds with the adopted children, and they understandably did not want to give them up. “Rescuing the children is difficult when the one you are contending against comes as a brother,” the Rabbi said in one of his speeches.

Much of Yitzhak Halevi Herzog’s correspondence from this period is preserved today in the archives of the National Library of Israel. The Library’s archivists were surprised to discover these letters and telegrams among the personal archives of the well-known Jerusalem attorney Alexander Amdur, an associate of Rabbi Herzog’s. Amdur’s archives were donated to the National Library in 2015.

Herzog’s efforts were not limited to children. In this telegram, Rabbi Herzog sought to obtain a French visa for a holocaust survivor by the name of Sonia Friedberg.

And in the Hebrew letter below, one of her relatives in Israel thanks the Rabbi’s son Yaakov for for their efforts on her behalf, noting her difficult personal circumstances.

“…I thank you very much for your goodwill in helping me obtain an entry visa to France for my relative from Poland.
Her name and address:
Sonia Friedberg,
Lodz, Piotrokowska 80
Her age – about 35.
I am certain that you will do everything in your ability to ease my relative’s situation. She was snatched from the fire, and she is lonely and desolate in a foreign sea of hatred, in the land where her parents, husband and other relatives perished…“

One of Herzog’s most effective partners in the effort to retrieve Jewish children was the Polish-Jewish activist Yeshayahu Drucker, who would approach families and institutions who had taken in Jewish children, often offering money and gifts in exchange for their release. Rabbi Herzog’s political connections were critical in raising these funds.

This Hebrew document contains a partial list of the names, ages and locations of children redeemed by Yeshayahu Drucker.

The letter below was addressed to Yaakov Herzog from the “Zionist Coordination Committee for the Redemption of Jewish Children”. It concerns one of the children redeemed by Yeshayahu Drucker.

The letter reads: “…As per your request, the girl Naomi Barter, born in Lodz in 1937, was redeemed from the foreigners by Rabbi Drucker and is now at the sacred communities’ orphanage […] As the expenses of this matter reached a sum of three hundred and twenty thousand zloties and you in your letter write that your American friends committed to participating in the expense of one hundred, we request that you inform us of the method by which we can receive the above sum…”

The Hebrew words below were addressed to Rabbi Herzog on behalf of  a group of Jewish children who survived the Holocaust. The exact date and origin is unclear, but they were likely read in his presence.

“We the children of the surviving remnant (Sh’erit ha-Pletah) are very happy to receive our distinguished Chief Rabbi, Rabbi Erzog [sic] and we promise to him that we shall make Aliyah and help build the Land. God willing, we shall live to see the liberated Jewish State, in the spirit of our Torah.”

In October of 1946, over 500 of the redeemed Jewish children boarded a train in Katowice, Poland, which then made the long journey all the way to Mandatory Palestine. These children would soon become citizens of the State of Israel, founded 19 months later.

Upon the declaration of independence in 1948, Yitzhak Halevi Herzog became Israel’s first Ashkenazi Chief Rabbi. His son Chaim Herzog would later become President of the Jewish State. His grandson Isaac Herzog is today the Chairman of the Jewish Agency and the former Head of the Opposition.

You can find more of Rabbi Herzog’s correspondence from his famous rescue mission, here.

Hagit Zimroni of the Archives Department at the National Library of Israel assisted in the preparation of this article.