Hebrew letters jumbled together and Stars of David in every corner - The National Library is swamped with calls from “collectors” from Arab countries offering “historical manuscripts” that supposedly once belonged to Jewish communities in Islamic lands.

About ten years ago, when Dr. Aviad Stollman was less than a week into his new job as the curator of Judaica Collections, he was inundated with a stream of emails and instant messages on his personal cellphone and Facebook account from strangers who were sending him pictures of antique manuscripts he could not identify. The photographs and messages, which were being sent from Arab countries, were meant to entice the recipient to purchase these lost historical items that had at one time belonged to various Jewish communities from Islamic lands, and had now been rediscovered many decades after the Jews, who had lived in these countries for the last two thousand years, were gone.

Looking at the growing pile of evidence, the new curator had no choice but to ask himself some tough questions:  Were these items proof of some unknown writing tradition? Was it possible these were artifacts not yet accounted for by the historical research of Jewish communities from the Islamic countries? And why were all the manuscripts inscribed on metal and not parchment or paper as is generally the case? Taking a second (and in some cases also a third) look at the messages was all Dr. Stollman needed to quell any uncertainty. He and many other experts have since discovered that it takes only little time and practice to recognize a forgery.

The first pictures he received were also the easiest to spot: manuscripts, and this is an iron-clad rule, are not engraved on metal (with the exception of inscriptions), and most definitely are not printed on metal. Another dead giveaway was the content of these “lost works”: most of the forgers, looking to get rich quick and attempting to take advantage of the naiveté of others, exposed their own lack of knowledge in the process. In most cases, the manuscripts were filled with text that, while composed of Hebrew letters, were complete gibberish. Apparently, the forgers copied Hebrew texts from the internet, but possessing not even an elementary knowledge of the language led them to many strange mistakes in the transcription. 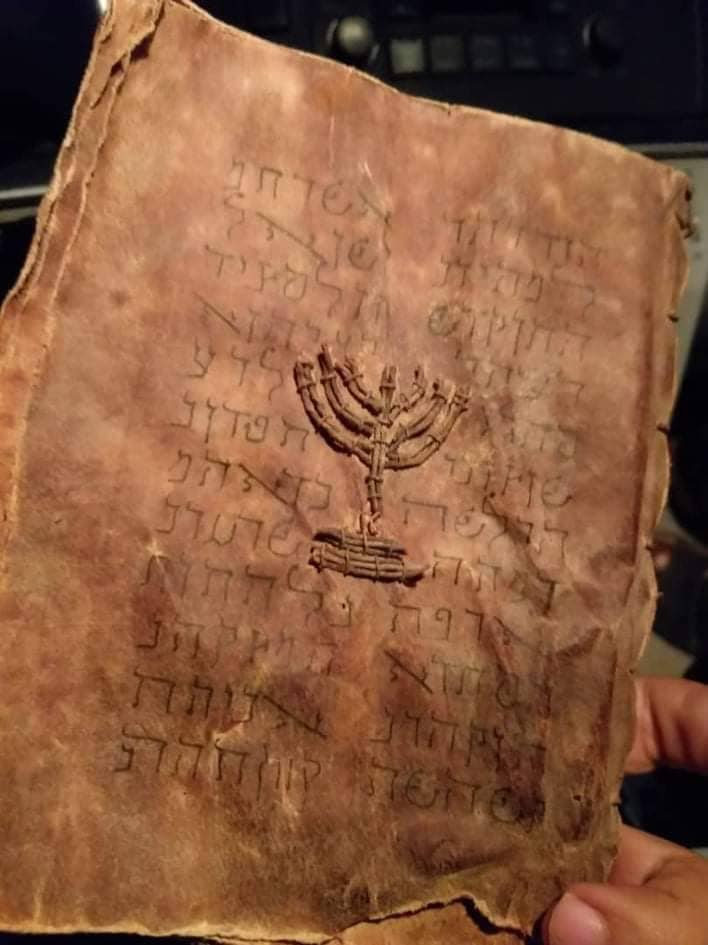 However, the forgers’ ignorance, not to mention greed, didn’t end there. Next to images of these “lost treasures” were also price tags. It’s hard to imagine that any of the eager sellers behind these objects had ever bothered to look at a catalogue from one of the many auction houses in Israel or the world specializing in Hebrew manuscripts. Otherwise why would they be asking for astronomical prices in the millions and sometimes even in the tens of millions of dollars? 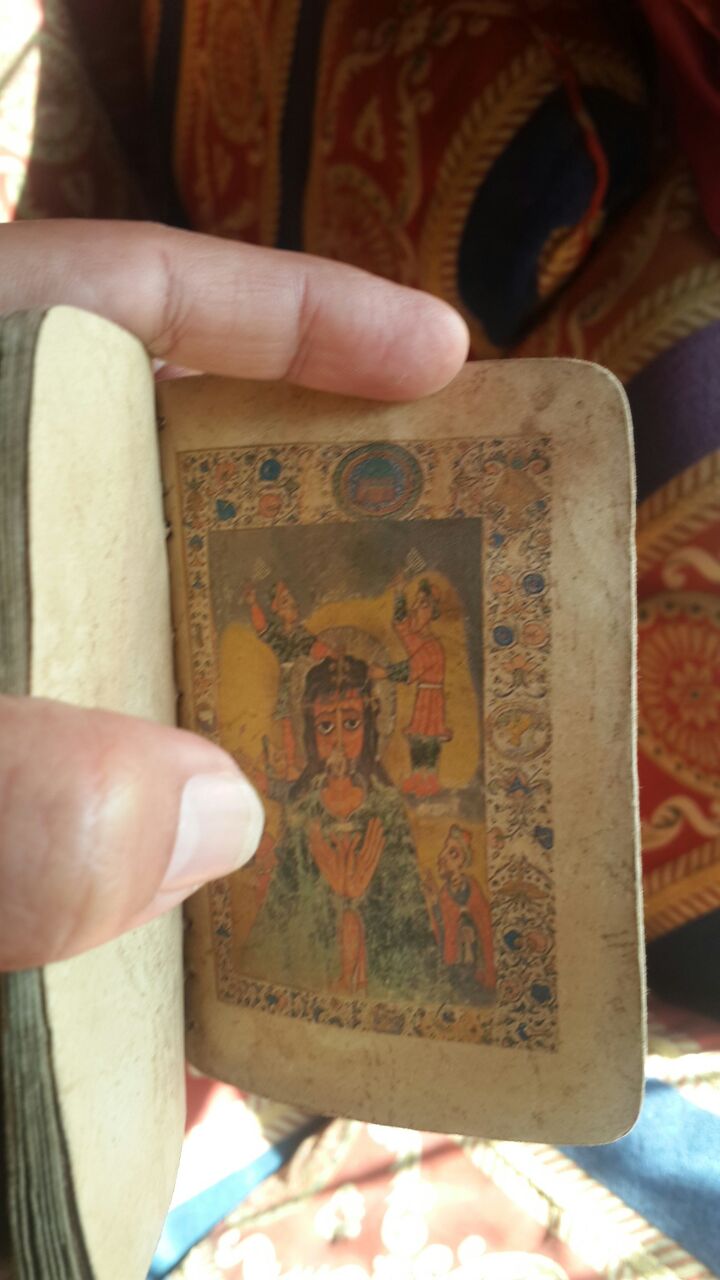 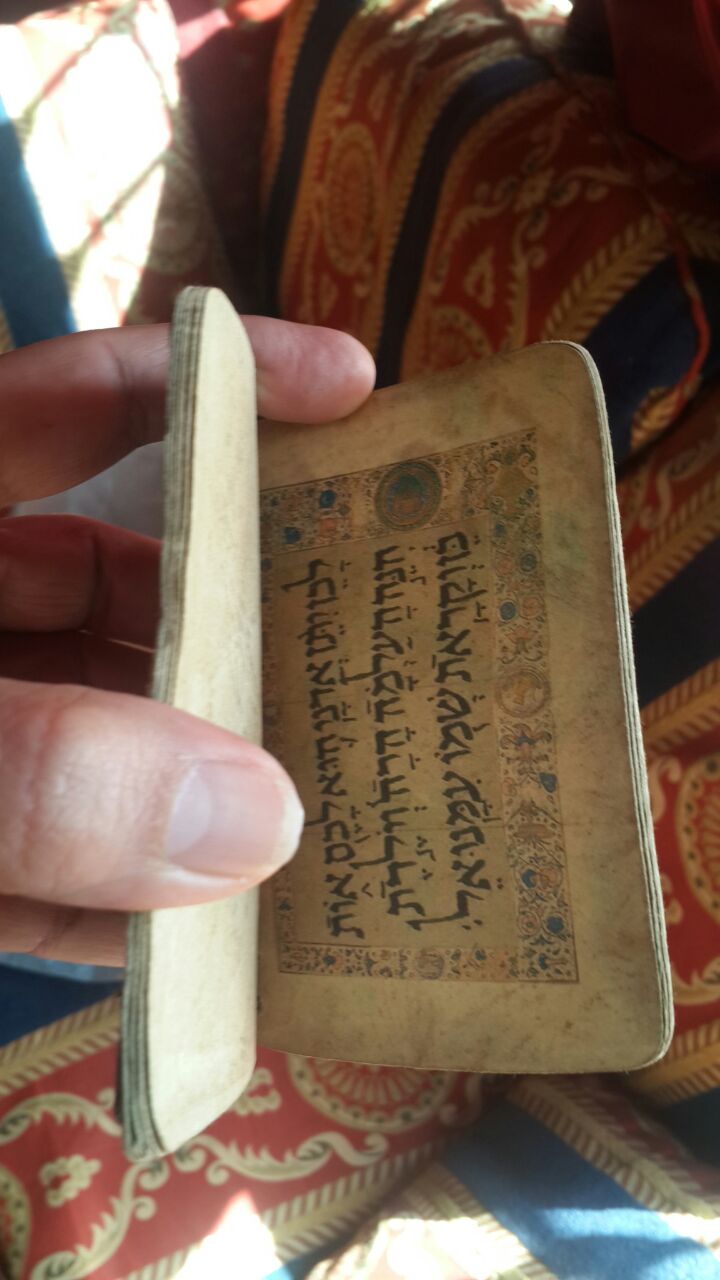 Not only photographs and videos of ancient manuscripts arrive weekly at the Library. Sometimes items of a different sort come up, which are no less interesting. This sword, for example, is decorated with a Star of David and letters that resemble Hebrew script, which are actually gibberish.

Occasionally, the forgers seems not to know what direction Hebrew is read in — right to left or left to right, or perhaps bottom to top?

It’s important to note that not everyone who sends pictures of these “recently discovered lost items” is in on the joke (by the way, no matter how many examples have already been uncovered, every new one that surfaces succeeds in raising a chuckle). Some collectors, themselves citizens of Arab countries, often with deep pockets, have innocently purchased a rare manuscript or item whose value was worth more than its weight in gold, or so they were told. Among those who were quick to pass on information to Dr. Stollman and other Library staff about a sale were a former head of the Mossad, Israeli media and political personalities, and others in either direct or indirect contact with the Arab world. People continue to contact the Library daily about items like these. 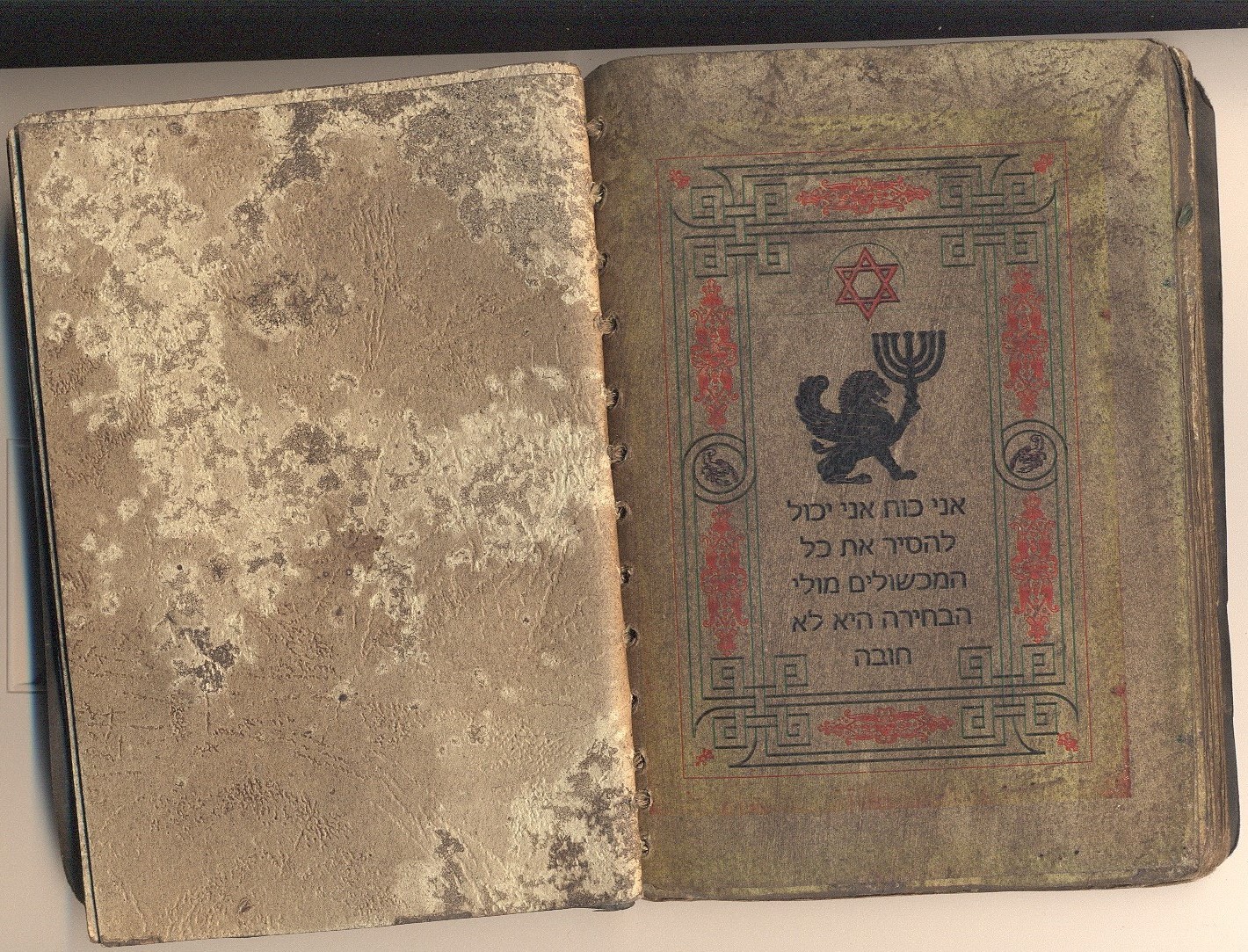 The fakes have improved over time. The metal has been replaced by parchment, textiles or paper made to look antique. Nevertheless, Dr. Stollman tells us, “With a trained eye—it doesn’t take more than a few seconds to figure out that it’s a fake.” Historical knowledge helps spot the new fakes that contain images (apparently printed ones) of a Star of David on the cover. Interested in selling their wares to Israeli collectors, the forgers don’t understand that the symbol that appears on the flag of the State of Israel is a modern one, so their promises that the artifact is thousands of years old don’t even hold up to the simple test of looking at the cover of the book being offered for sale. 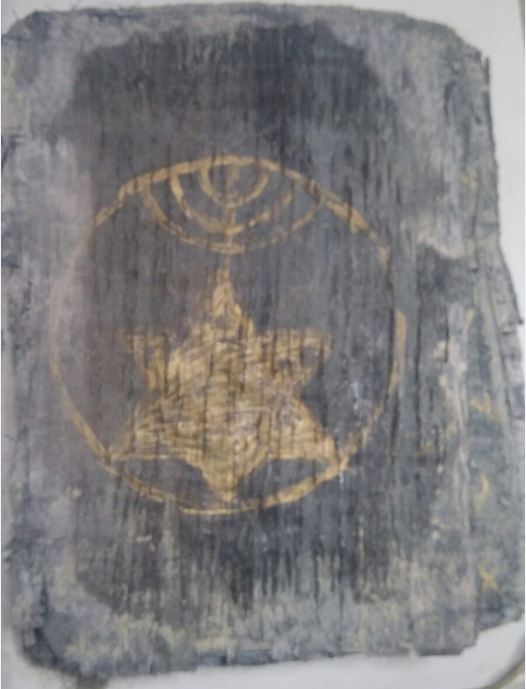 It seems that not all researchers dismiss the evidence sent daily to potential buyers. In England for example, the Centre for the Study of the Jordanian Lead Books treats these items in all seriousness. On the center’s webpage, members discuss the question of authenticity: “The writing on the metal books is not babble. There is definitely code or encryption in the writing. Members of the Panel have already prepared some translations, these were presented as a preliminary report to the Board of the Centre at the Annual General Meeting on the 26th May 2016.” Our thorough search of their website did not yield any such report, but in the center’s other publications—including videos on YouTube on which the comments option has been blocked—it is claimed over and over that (apparently)  these are authentic artifacts—or at the least copies and replicas of authentic items that have been lost. We, however, have yet to be convinced.

In conclusion, Dr. Stollman, who today serves as chief curator of the National Library, admits, “from time to time, an item comes up that makes you pause, even if only for a few seconds.” The most confounding item he confronted was a Persian-Jewish forgery. What made even the experienced curator doubt whether this might actually be an original historical artifact was the text—it was a known, authentic Persian-Jewish text. In this case, the images gave the forgery away – the illustrations that did not match the text. “The forgers combined images that were not always related to the original text, and naturally they added the menorah—for authenticity.” 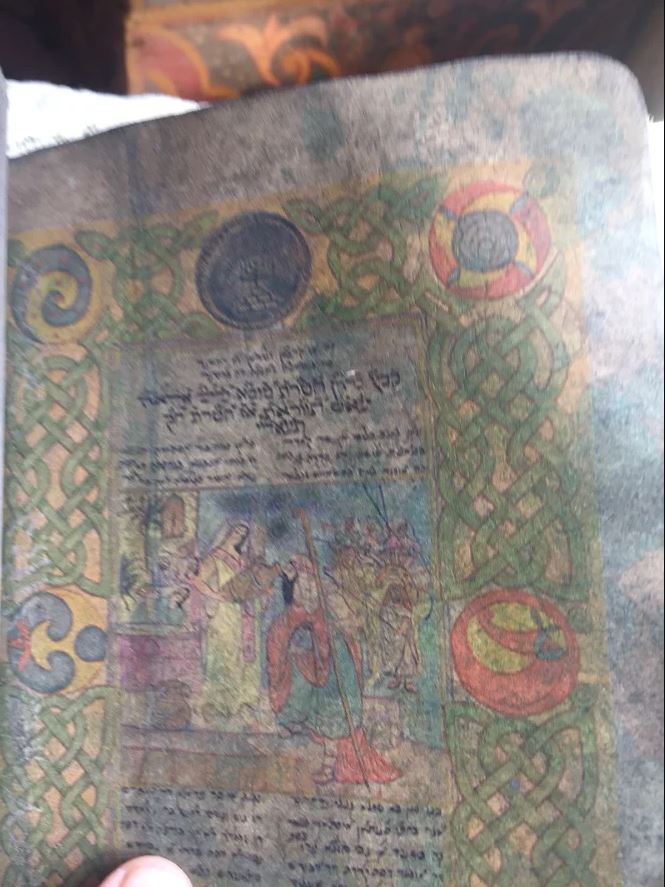 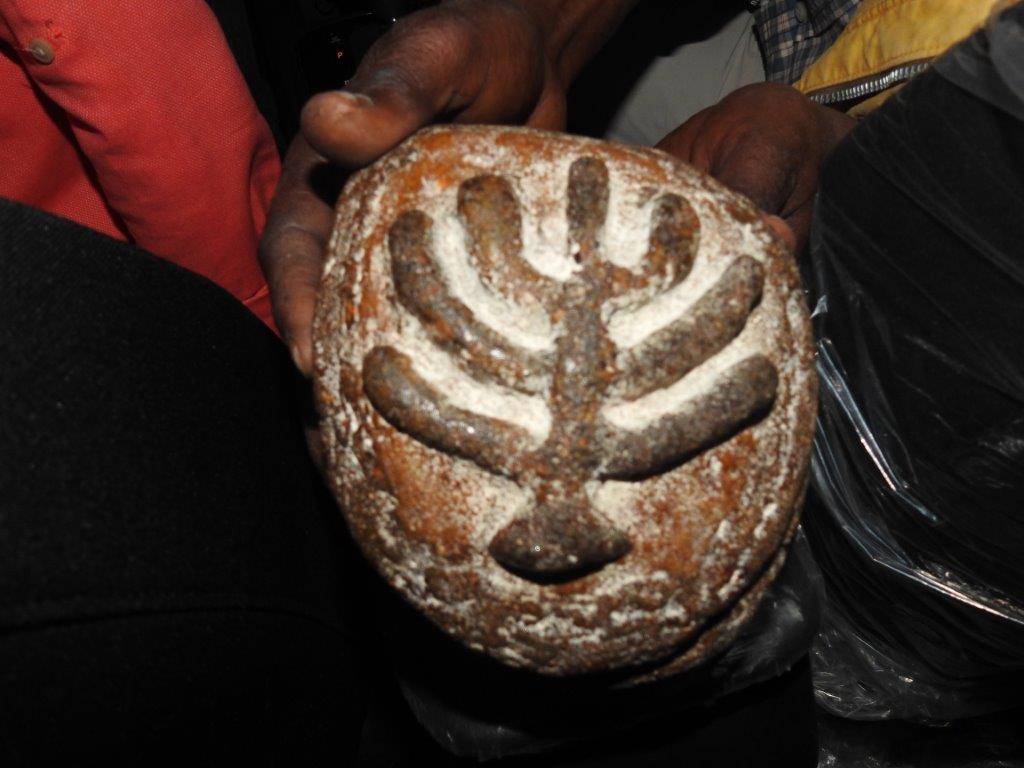