Shmuel Blasz was murdered at Auschwitz, but the original melody he wrote for the beloved Passover song lives on 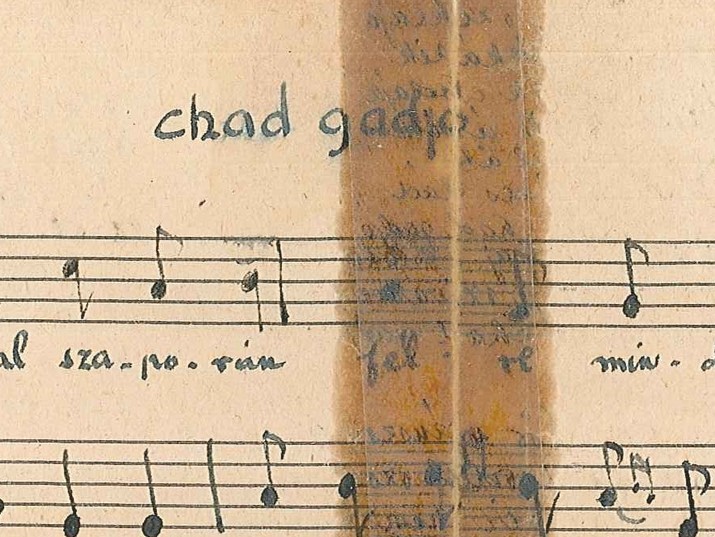 Shmuel Blasz's version of Chad Gadya, the Music Department at the National Library of Israel

Shmuel Lazarovich, a young Jewish man in his early thirties, is recruited to the Hungarian Labor Service. He leaves his wife and children behind. The Hungarian military has no interest in Lazarovich and his Jewish brethren, who are forced to take on difficult and arduous labor tasks.

Shmuel Blasz, a Jewish musician, is also recruited to the Hungarian Labor Service. Blasz, who works alongside Lazarovich, teaches his new friend his own original melody, a Hungarian version of the famous “Chad Gadya” Passover song. One of the two jots down the notes on a random sheet of paper, thus preserving Blasz’s composition. Later on, during a short vacation in his home village of Hőgyész, Lazarovich places the notes in a side cabinet in his home.

On the 19th of March, 1944, the German army invaded Hungary. Many Hungarian Jews perished, including Shmuel Blasz and Shmuel Lazarovich’s wife and children. Shmuel Lazarovich himself was sent to the Dachau concentration camp.

As a holder of a certificate attesting to his being a Yugoslav, Shmuel Lazarovich was allowed to return to his home in Hőgyész. Wearing a German soldier’s hat emblazoned with the symbol of the Wehrmacht, he received a warm welcome from the Swabian villagers who greeted him. Lazarovich hurried to his house to check if everything was in order. The wooden cupboard in which he had concealed his Jewish ceremonial items remained intact. He opened the cupboard and saw his complete set of tefillin and his Talit (prayer shawl) just as he had left them. Next to them lay a Passover Haggadah, with a single brownish sheet covered in musical notes inserted between its pages. This was the music composed by Shmuel Blasz for his Hungarian version of Chad Gadya.

Following the war, and after many hardships, Lazarovich remarried. Until 1956, he continued to live in Hőgyész where he served as a cantor, shochet and mohel. Later, he was asked to move to Budapest and serve in similar positions for the local community. In 1964 he immigrated to Israel and settled in Bnei Brak where he lived for nearly two decades. In 1983, Shmuel Lazarovich passed away, leaving behind a daughter – Judith.

Laron himself was even recorded in the Sound Archive studio, so that the songs which were sung in his childhood home could be documented and preserved.

During the recording process, he told of another Hungarian song he had learned from his uncle: “The story takes place in 1882, in a village in northeast Hungary. A maid, who had apparently quarreled with her (non-Jewish) masters, took a walk along the banks of the Tisza River, where she either committed suicide or fell to her death.

“It was the eve of Passover. The local Christians claimed the Jews had killed the girl because they wanted to use her blood to make matzot. The body was found but there were no signs indicating that the girl was murdered. Her mother refused to identify her and claimed it was not her daughter. The local prosecutor, who was anti-Semitic, forced the shochet‘s son to admit he had witnessed the murder while peeking through the keyhole of the synagogue. The trial lasted many years. The shochet, the rabbi, and other members of the community were sent to prison, tortured and punished. A Hungarian nobleman who advocated on behalf of the Jews was able to prove that the shochet‘s son was too small and short to see what was happening through the keyhole. Things eventually escalated to the point where only the intervention of Emperor Franz Joseph finally put an end to the trial… Many years later, my uncle heard the tale being sung by a female servant in a house he was staying in.”

And now back to Chad Gadya and Shmuel Blasz’ melody. Laron, Lazarovich’s nephew, did not know any details about Blasz’s identity. A search of internet sources led me to an article published in the United States in 2011, titled: “Holocaust survivor to hear live performance of father’s music“, as well as two additional articles “Springs Holocaust survivor hears father’s music for first time since WW II” and “Giving Voice to History: Shoah-Era Scores Get First Hearing“.

Eva Egri, a ninety-year-old Holocaust survivor, was able to give new life to pieces of music written by her father Shmuel Blasz. Blasz was a composer and the chief cantor at the synagogue in Eger, Hungary. Egri managed to survive the war and made her way to the United States after many long, difficult years. For about six decades, she preserved many of her father’s manuscripts which had ended up in her hands. In 2011, Samuel Blasz’s compositions were performed in New York and later in Florida.

I tried unsuccessfully to contact Egri and other family members. Eventually, Professor Nachum Dershowitz referred me to Judy Merrick, who knew Blasz’s daughter and had also performed and directed some of his works. She confirmed that this was the same Shmuel Blasz.

Nur Ben-Shalom is a Jewish-Israeli clarinetist living in Berlin. “When you perform a composition you never know what will happen. You start something, throw something into the air and don’t know how it will end,” he told me. In a sense, this is the story of Blasz’s Chad Gadya melody – words and notes that have moved between different places and time periods, music that has been given new interpretation, beyond what the original composer could have imagined. Ben-Shalom heard the story of the melody and decided to give it a new life. He extracted the notes from a scan of the manuscript (which appears above) and arranged the song for a chamber music ensemble including clarinet, violin and piano.

“I’ve performed in different parts of the world, with ensembles and orchestras, and nothing has given me such special satisfaction as reviving this kind of piece,” he said. “There is a very strong connection here which is difficult to explain, a connection to tradition, a connection to history, a musical connection. It’s a special feeling to be able to revive the stories of Jews who were part of this culture, who were valued, and to tell their stories in Germany of all places.”

Ben-Shalom arranged the song in two different versions; one is slow and lyrical and the other is faster, with a Klezmer feel to it. The piece was performed at a Protestant church in Berlin before an audience of 1,300 people. When I asked if this represented a contradiction – performing a work by a Jewish composer who was murdered in the Holocaust in a Christian church – he answered: “I think it’s a statement. When the head of the church in Germany comes and says: ‘I want to perform Jewish music in the church’ – that’s a strong statement. The church in Germany is a powerful force with a significant influence on culture in Germany.”

“And there is also something special about dealing with the source material. After the concert, people approached me, asking questions about Shmuel Blasz and Shmuel Lazarovich, wanting to know more. I had printed the scan of the notes and people were examining it. People asked for the arranged version. I have no control over what will happen from here on out. The music will live on. Someone else will arrange it in one way or another. The story will be told and suddenly Samuel Blasz will be resurrected. “

Thanks to Gabriel Laron, Anat Wax and Elena Kampel for their assistance in preparing this article.