Israel's first Prime Minister reveals: I do not envy soldiers who pray. A unique glimpse into David Ben-Gurion's inner philosophy

Not one thing about the journey undertaken by the members of the early Zionist movement was clear-cut, simple or predictable. To create a reality that exceeded imagination, Zionism needed creative minds; the young movement found what it sought in figures of the stature of Pinsker, Herzl and Ahad Ha’am. Even after these individuals had passed on, the movement’s members continued to grow and establish Herzl’s vision of a Jewish state that could serve as a spiritual center and “a light unto the nations”, as described by Ahad Ha’am.

After the state was established and the vision that was conceived through words and actions became a reality, manifested in everyday life, the leaders of this movement which evolved into a state continued to challenge the philosophers and theorists. Now they turned to the intellectuals who gathered in the newly-established universities and presented them with problems and questions raised by this rebirth of Jewish sovereign life.

David Ben-Gurion, a statesman with an avid interest in philosophy, made a point of constantly engaging in dialogue with academics and specialists from different areas of expertise. He conducted comprehensive correspondences with inventors, scholars and scientists, observed their opinions on various issues and clarified his own views on those same topics. The National Library collections include many letters sent and received by Ben-Gurion; among them is a letter he sent to the Israeli philosopher and academic Professor Samuel Hugo Bergman, as well as Bergman’s reply.

In 1960, Israel’s first Prime Minister contacted Professor Bergman to share his thoughts about a recent personal experience. Ben-Gurion opened his letter to Bergman with a philosophical-theological analysis of the biblical verse: “In the image of God He created him” (Genesis 1:27). Was man truly created in the image of God? Ben-Gurion thought otherwise. Though he rejected atheism and denied the assumption that “the world consists of materials and atoms blindly put together, and that there is no logic, reason or rule to the cosmos,” he also regarded any personification of God as “different forms of idolatry.”

The inability to understand the universe and how it works brings man to “compare the ‘mysterious infinity’ (an expression from the Kabbalah that perhaps describes best the unknowable divine essence) to man – this is but naive haughtiness, an arrogant pretense of a small creature towards its ‘creator.'” Ben-Gurion wrote the word ‘creator’ in quotation marks, a way of pronouncing man’s inability to articulate the meaning of infinity or capture it through logic.

At the end of his letter, Ben-Gurion describes the experience that brought about the thoughts he shared with Bergman: “And it may seem strange that I write this immediately following Yom Kippur, after joining a company of paratroopers holding the Yom Kippur prayer service in one of the shacks here [in Sde Boker, Ben-Gurion’s desert home]. All evening yesterday and nearly the entire day today, until ma’ariv [the evening prayer]. I listened to the prayers and contemplated them. I could feel the devotion of the few people who believed in what they were saying; I felt respect and fondness for them – but I did not envy them.” Ben-Gurion argued that prayer is not a dialogue between man and his creator, claiming that “it may feel pleasant – yet it is not reality, but self-deception.”

One month later, on November 11th, Bergman sent his reply, apologizing for the delay. He addressed the Prime Minister by his name (“Mr. Ben-Gurion”) omitting his title but adding “the highly respected.” Bergman responded dismissively to the idea that Moses received the Torah at Mount Sinai: “Although I must say my view of the Torah is closer to that of those who have pure faith than to those who see the Torah as no more than a purely secular book and do not see the fundamental, vast difference between the Torah and secular literature.” 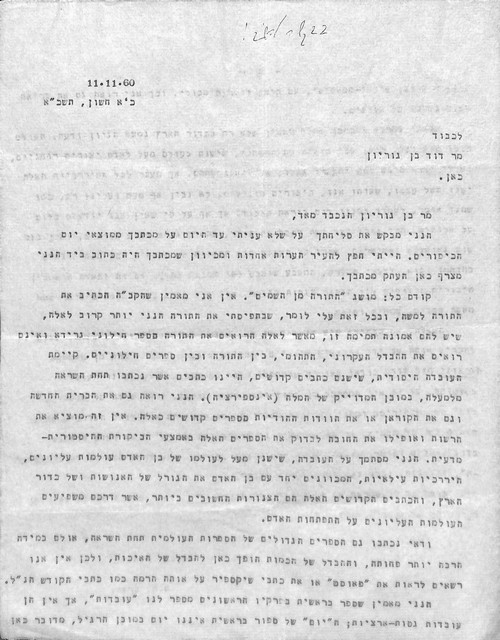 Bergman claimed, “it is a fundamental fact that there are holy texts; texts that were written with inspiration from above.” According to Bergman, these holy texts also include the New Testament, the Quran and the Indian Vedas. The fact that these texts are holy does not eliminate the necessity to “examine the books applying historical-scientific means of criticism”. At the same time, Bergman acknowledged the existence of higher worlds, “and these holy texts are the most important channels through which the higher worlds impact man’s development.”

The creation of the world, according to Bergman, just like the creation of man in God’s image, is one of those facts that are true “in a divine, metaphysical or symbolic manner, if you will.” Bergman agreed with Ben-Gurion that God cannot be comprehended through logic, and therefore one must “stand before Him in reverence and awe.”

At the end of his letter, Bergman addressed the question that had been troubling the ‘Old Man’ (as the Prime Minister was commonly known) – the question of the essence of prayer. He wrote as follows: “The question whether or not prayer is a dialogue is not one that can be answered, in my opinion, through theoretical arguments. Theoretically, to all appearances, you are of course right that the person praying is speaking to themselves. Yet whether that is the whole picture, an onlooker cannot say. It is a matter of experience. I am an empiricist and therefore believe the reports of the greatest prayers of all religions and nations. He who says it is but ‘self-deception’ is like someone who observes two lovers, and insists that there love is but self-deception. ‘Objectively’, outwardly, he is right. And yet, ‘love is strong as death.'” 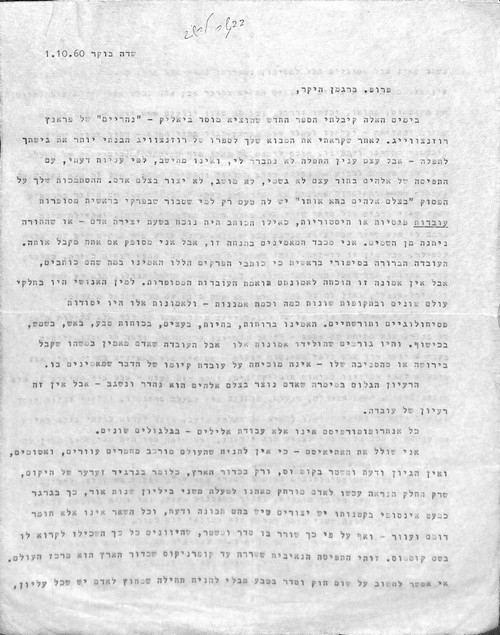 If youy liked this article, try these:

Menachem Begin: The Man of a Thousand Faces

Nathan Yellin-Mor: The Underground Fighter Who Became a Peacenik