Learn how a traditional Jewish prayer melody inspired everyone - from classical composers to filmmakers to psychedelic rock bands. 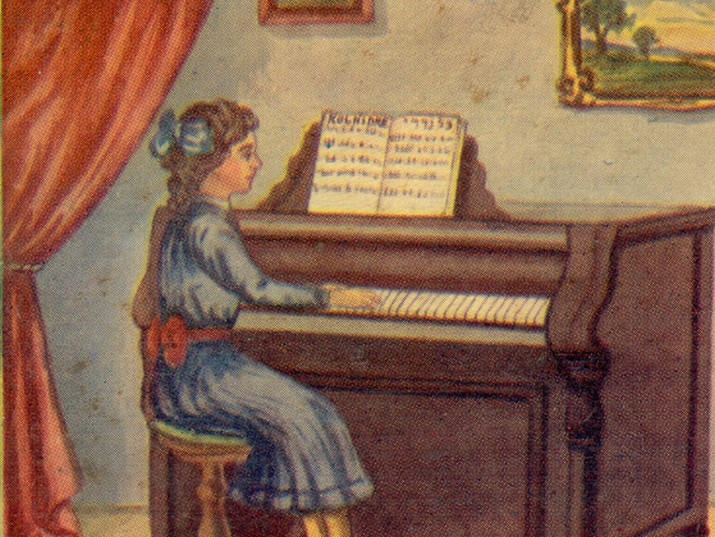 A girl plays the notes to Kol Nidre, The Folklore Research Center, Hebrew University of Jerusalem

Kol Nidre is a centuries-old Jewish prayer melody that carries with it a heavy emotional weight, accumulated over the ages. Encompassed in this bundle of emotions are the memories of the troubles, pogroms and disasters experienced by the Jewish people in the diaspora. The Kole Nidre melody has always enjoyed a special status, but few have attempted to decipher the spell hidden in this cluster of notes which can be heard emerging out of Jewish prayer houses on the eve of Yom Kippur at the turn of the day, as twilight falls and the gates of heaven open.

prohibitions, oaths, consecrations, vows that we may vow, swear, consecrate, or prohibit upon ourselves –

from this Yom Kippur until the next Yom Kippur, may it come upon us for good –

regarding them all, we regret them henceforth.

They will all be permitted, abandoned, cancelled, null and void, without power and without standing.

and our oaths shall not be valid oaths.

The combination of the setting, the emotional backdrop, and the powerful melody creates a unique psychological atmosphere among those gathered to hear the prayer on Yom Kippur. Much of this has to do with the ability of music to reach into the soul, even if the listener cannot understand the words. A few notes are often enough to trigger intense feelings and bring back old memories.

There is, in fact, not just one Kol Nidre melody, but a collection of musical themes which came together and settled in a permanent order at some point during the 15th or 16th centuries. Its incarnations and various musical interpretations throughout the generations constitute a unique phenomenon in Jewish liturgical music.

Kol Nidre’s exact origins are the subject of debate. Abraham Zevi Idelsohn, the famous scholar of Jewish music, made the case that much of the melody has its roots in German medieval folk music.   Johanna Spector, a 20th century scholar, rejected this idea arguing that it was clearly of Jewish origin.

The notes to Kol Nidre first appeared in print in Berlin in 1765 thanks to a local cantor by the name of Ahron Beer. About a hundred years later, Louis Lewandowski (1821-1894), one of the leading figures in the modernization of Ashkenazi liturgical music, composed the standard modern version of the melody published in 1871, which he arranged for a cantor and an organ. This version spread to Jewish communities around the world and eventually became the common standard.

Towards the end of the 19th century, a peak period in instrumental concert music composition, pieces inspired by Kol Nidre began to appear for large instrumental ensembles. Some were composed by non-Jews. Kol Nidre’s status as a “Jewish melody”, with a reputation for evoking sadness, contemplation, regret and introspection, served to inspire a wide range of composers who usually chose instruments known for being able to trigger these emotions, like the cello and the violin which, quite literally, play on the heartstrings.

The most famous of these pieces was composed by Max Bruch (1838-1920), the German composer who often used folk music as his inspiration. Bruch befriended Abraham Lichtenstein (1806-1880), a cantor at the same Berlin synagogue where Lewandowski served as choir director. Lichtenstein played Bruch several Jewish tunes, including Kol Nidre and the work known as “Hebrew Melodies” by Isaac Nathan (1791-1864) which was set to lyrics by Lord Byron. The tune of “Oh! Weep for Those,” from this collection of Byron’s poems, is based on motifs taken from Kol Nidre. Bruch combined these two melodies into one of his most famous compositions: Kol Nidrei, Op. 47 (1888) for cello and orchestra.

The year 1927 saw the release of a film that marked the shift from the silent era to “talking pictures” or “talkies”. Though this movie was not yet a fully-fledged “talkie” as it did not feature audible dialogue throughout its whole length, it was still considered a major milestone of its time since it included pre-recorded musical segments featuring the actors themselves singing on screen thanks to cutting edge technology which enabled the synchronization of picture and sound. This film was “The Jazz Singer”, starring Al Jolson, the actor and comedian who is often considered the first major Jewish star of the American entertainment industry (born Asa Yoelson in Lithuania to a family of cantors in 1886, they immigrated to the United States in the late 19th century).

“The Jazz Singer”, long considered one of the best American films of all time, represented a breakthrough in more ways than one. In addition to the technological advancements, the movie cast a spotlight on subjects that, until then, had received little exposure in film or that had only been dealt with in a superficial and stereotypical fashion. One of these was the use of blackface, an entertainment genre in which white actors and dancers would paint their faces black to in order to assume the appearance of a “negro”. Blackface was primarily used to portray the black man as a humorous and grotesque caricature, and is today seen as a form of racism. In “The Jazz Singer”, however, the use of black makeup to cover up the face serves as allegory to the hero’s escape from his father’s home and his hiding away from a deep hidden truth.

The film, based on a story by Samson Raphaelson, is centered on the figure of Jakie Rabinowitz, played by Al Jolson. Jakie is the son of an experienced cantor, and their immigrant family, with their home on the Lower East Side of Manhattan, is somewhat reminiscent of Jolson’s real life background.

The eve of Yom Kippur arrives and Jakie’s father prepares to recite the Kol Nidre prayer, but Jakie has other things on his mind; he’s off at the club entertaining the crowd there with his singing. His father, in a rage, drags Jakie back home and forces him to prepare for synagogue, where Jakie is expected to stand beside the old cantor during the prayer and learn the ancient craft. The young man refuses. The father then declares (or perhaps even vows) that if his son chooses to enter the world of show business, he will be disowned and all family ties will be cut off. Young Jakie then runs away from home at twilight on the eve of Yom Kippur, as his mother sobs in the background and his father sings Kol Nidre at synagogue. All three begin the fast with empty stomachs

Jakie wanders cross America and as he matures he begins to gain a following thanks to his musical talent. Jakie Rabinowitz becomes Jack Robin – the famous jazz singer. One day he receives an offer to act in a Broadway play, the opportunity he has been waiting his whole life for. He packs up his belongings and heads back to New York. Jakie tries to contact his parents to invite them to the big event, but as it turns out, opening night is scheduled for Yom Kippur.

At the same time, Jakie’s father falls ill. The synagogue is left without a cantor on the eve of the holy day. Jakie’s mother begs him to take his father’s place, but he refuses. This is when the blackface scene takes place. The segment works as an analogy to Jakie’s internal state during these moments, as his dilemmas and regrets eat away at him.

Eventually, as the hour of Kole Nidre approaches, Jakie learns that his father is at death’s door. He hurries to his parents’ house to say his goodbyes and decides to take his father’s place on the synagogue bema (platform) as cantor, to recite Kol Nidre. Jakie sings the prayer in his own voice, as the ghost of his father, who has just passed away, hovers above him.

Few films of the time managed to incorporate so many levels of meaning. Beyond the psychological connotations and complex issues revolving around father-son relationships that the movie raises, and in addition to the racial issue brought in the by the use of blackface, as well as the use of music to represent an internal struggle, the decision of the filmmakers to invest their new technological resources in a movie which focuses on Kol Nidre is understandable when one considers the emotional, psychological and historic significance of this prayer and the hour during which it is recited. The viewers witness the awesome pressures which come to bear on the hero, who must grapple with questions of religion, identity and race, as the son of a cantor, a Jew, an immigrant, an actor and a singer. Here, Kol Nidre serves as a musical symbol of a critical question of identity, a “to be or not to be”: a cantor on the eve of Yom Kippur or a shining star on Broadway – Jakie Rabinowitz or Jack Robin.

The melody of Kol Nidre, and particularly the famous opening segment, is used throughout the film as a leitmotif, a short musical theme representing Jakie’s Jewish roots. This cluster of notes is heard in every scene taking place in his parents’ home, whenever Jakie is reminded of his father, and whenever he his troubled by his internal dilemmas. The prayer melody features heavily in both the opening and closing segments of the film.

A remake of “The Jazz Singer” was released in 1980, starring Neil Diamond in the role of the son and Laurence Olivier as the father. In this version, the plot takes place in the late 1970s, with the hero drawn towards a career as a soft-rock singer. Like the original, this film also makes use of blackface, and ends with an emotional version of Kol Nidre.

A number of famous pop singers have recorded versions of Kol Nidre. Perry Como (1912-2001), who came from an Italian-American background and was one of the biggest stars of the 1940s and 1950s, recorded Kol Nidre for his 1953 album “I Believe”, a collection of religious songs and hymns of different faiths.

A similar album, “Good Night, Dear Lord”, was released in 1958 by Johnny Mathis (born in 1935), another successful American singer of the period, who also included a passionate version of Kol Nidre. In an interview he told of being captivated by Jewish music when, in his youth, he visited a synagogue with his friends. He chose to sing the piece because of how it made him feel – “Kol Nidre gave me a chance to let it all out, and hold back nothing.”

The Electric Prunes were an American psychedelic rock band, part of the Los Angeles music scene of the late 1960s. For their 1968 album “Release of an Oath”, the band recorded a song based on the opening theme of Kol Nidre, which serves as the first track on the record. The album, whose title also alludes to the prayer, deals with different aspects of regret and atonement and includes a number of Jewish and Christian liturgies.

The emotional and psychological dimensions of the Kol Nidre melody are at the heart of the significance and meaning it carries in a manner that is almost detached from the dry legal statement presented in the text. This fact has allowed this Jewish prayer to break free of the binds of language, and transcend the boundaries of culture, inspiring classical composers, filmmakers and rock musicians from Berlin to the California coast, all of whom recognized the eternal nature of its melody, with its key to the complexities of the soul.

Rare: A Remnant of One of the Oldest Yom Kippur Prayer Books in the World

Is the Shofar Really the Voice of God?