The Life of Abraham: Scenes from Hebrew Manuscripts 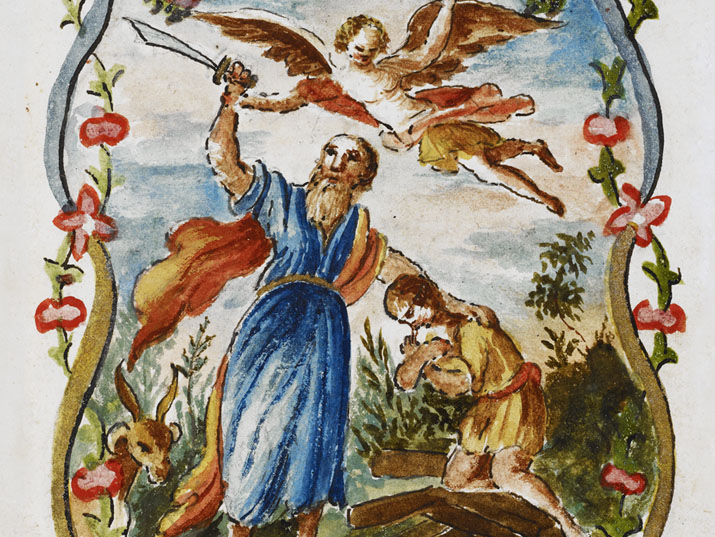 Since the completion of the ‘Book of Books’, its countless readers have derived inspiration from the great struggles, tests and challenges its heroes faced. It is therefore no surprise that the numerous challenges experienced by one of the Bible’s most renowned and beloved heroes – Abraham the Patriarch – are explored again and again in Western art and literature.

One of the themes most commonly adapted by medieval illuminators of Jewish manuscripts was the sentencing of Abraham to death by Nimrod, King of Ur of the Chaldees, by having him cast into a burning furnace. This story does not appear anywhere in the Bible but in Bereishit Rabbah 38:13, an ancient midrash comprised by Jewish sages to complete the missing pieces of the story of Abraham.

In the famous story, Abraham is cast into a burning furnace for rejecting idolatry and miraculously survives at the hand of divine intervention. In three manuscripts written during the 14th century, the heavenly intervention is illustrated in different ways: The Carpentras Passover Mahzor, held in the British Library, shows Abraham surrounded by flames, as two angels (distinguishable by their wings) enter the furnace to rescue him.

The third depiction appears in the Barcelona Hagaddah, a Passover Haggadah composed in Barcelona around the year 1320: King Nimrod is again shown ordering his subjects to throw Abraham into the burning furnace. Once more, winged angels intervene to ensure Abraham is not consumed by the flames.

Abraham’s rescue from the burning furnace is not the only scene to be illustrated by these medieval artists. A few hundred years later we find an even more notable scene, perhaps the most famous episode in the the Hebrew Bible – the Binding of Isaac.

The Italian mohel, Matsliah Yehiel Ben Moshe David, maintained a register of his work for over fifty years. The first entry in this register, known as a Pinkas HaMohel, was logged during the Hebrew calendar year 5552 (corresponding to the year 1792 in the Gregorian calendar) and the last is dated 5604 (1844). Most of the register is dedicated to recordings of the circumcision ceremonies he conducted over this period lasting more than fifty years.

The register entries are consistent and contain the dates on which the mohel circumcised the eight-day-old infants; the names of their fathers; each child’s place of birth (e.g. ‘Parme’ – the Italian city Parma); who held the baby on his lap during the circumcision (the godfather or sandak); and who served as kvatter (the person appointed to carry the child to be circumcised). The mohel then recorded the baby’s name, add the blessing: “May he enter into Torah, into marriage, and into good deeds, and so may it be Your will, let us say, Amen.”

Aside from these records of his work, referred to by the register’s owner as Peratim (particulars), the register also consists of a few songs and prayers for the circumcision ceremony, pictures of scenes from the Bible and an “Introduction to the particulars”. The first picture in the register is of the Binding of Isaac. The association here is a curious one: In the Book of Genesis, the Binding of Isaac appears after the covenant between God and Abraham had already been made. Isaac should have already been circumcised by that time.

This mohel illuminator wasn’t the only one to confuse the Binding of Isaac with the circumcisions of Abraham and Isaac which took place during the covenant between God and Abraham in the earlier Torah portion ‘Lech-Lecha‘ (Genesis 12:1–17:27). In another illustration, which appears in a copy of Sefer Evronot, an even clearer allusion to circumcision is made in the depiction of drops of Isaac’s blood. This work was written and illustrated in Prussia in the Hebrew year of 5476 (1716). Staff members from the National Library’s manuscripts department hypothesized that the illustrations were mainly influenced by what the illustrator may have seen in his own environment, and likely also by various illustrated plaques which would have been common in nearby Christian communities.

If you liked this article, try these: How a Handwritten 12th-Century Manuscript by Maimonides Ended Up at the National Library Spotting a Fake: The Flourishing Industry of Jewish Manuscript Forgeries The Package is Secure: How Jewish Women Were Smuggled to Safety in 19th Century Italy