Manuscripts belonging to Rabbi Isaac Jacob Reines, one of the founding fathers of religious Zionism, have been donated to the National Library 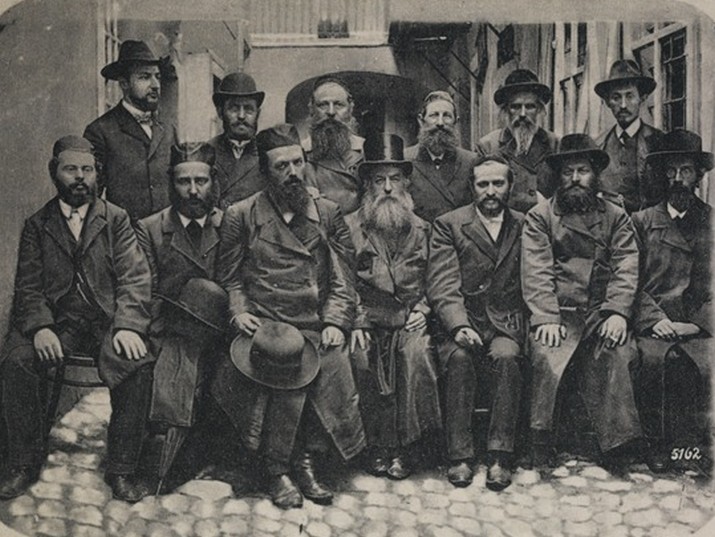 A postcard featuring an image of Rabbi Isaac Jacob Reines (center, seated) and other members of the Mizrachi, Verlag Zion, Vienna, 1902

In its early days, the Zionist movement was not popular among traditionally religious Jews. Most rabbis either opposed Zionism or ignored it. Not so Rabbi Isaac Jacob Reines (1839-1915), who gave the new movement his wholehearted support. We know Rabbi Reines’ views from his published works, but for a hundred years his many manuscripts have been hidden from the public eye and practically forgotten. Recently the manuscripts were donated to the National Library of Israel, where they were digitized and put online. The manuscripts show a new dimension of Rabbi Reines’ relationship with Zionism and with its founder, Theodor Herzl.

Rabbi Reines first got involved in the Zionist movement in 1899, when he participated and spoke at the Third Zionist Congress in Basel. In the coming years he continued to participate in Zionist Congresses. He met Herzl and corresponded with him until Herzl’s death in 1904. In 1902 Rabbi Reines founded the Mizrachi movement, a religious faction within the Zionist movement founded with Herzl’s support.

That same year, Rabbi Reines published Or Chadash Al Zion (A New Light Shines on Zion), a religious defense of Zionism. He sent a copy of the book to Herzl, along with a letter that has been preserved in the Zionist Archive and printed in Sinai 3, page 340:

I am honored to present you with my book, Or Chadash Al Zion (A New Light Shines on Zion), which I dedicate to your great and exalted name. As I publish this book which speaks of the Zionist movement, I see a personal obligation to present it as a gift to the one who founded this movement and gives his life to it.

Upon Herzl’s untimely death, Jews around the world mourned his passing, Rabbi Reines among them. But the newly discovered Reines manuscripts show us that years later, Rabbi Reines was still speaking of Herzl and even made the unusual decision to lecture in honor of Herzl in his yeshiva.

The lectures of Rabbi Reines from the years 1908-1911 are collected in a manuscript titled Yalkut Arachim (A collection of entries). Rabbi Reines wrote a heading above each lecture with the date or occasion on which he delivered it. Most of the headings are typical occasions for lectures that come up in the life of a Rosh Yeshiva, like “opening lecture for the students at the Yeshiva”, or “Shabbat Hagadol” (the Sabbath before Passover when rabbis typically deliver special lectures), but two surprising dates appear:  “Sunday, 20 Tammuz 5668, the anniversary of the passing of the head of Zionism, of Herzl,” and above another lecture, “What I decided to speak about today, Wednesday, 20 Tammuz 5670, the anniversary of the (passing of) Herzl, peace be upon him.”

The first of these lectures is given the title “the participation of the living with the dead”, and in it Rabbi Reines examines the topic of immortality and life after death. Surprisingly, Rabbi Reines presents a fairly secular view of life after death: “When we see that even after his death, his achievements are recognized, that it a sign of his immortality.” Later in the lecture, Rabbi Reines adds that “those whose help is recognized even after their death have been made to be like God.” The last words of the speech are: “All signs of mourning are signs of immortality.”

We now know that Rabbi Reines’ connection to Herzl went far beyond political cooperation. Reines truly admired Herzl, seeing him as a figure who was larger than life and practically superhuman. Could it be that Rabbi Reines’ final sentence about signs of mourning is not only a general statement, but also a reference to himself, as he continues to mourn the loss of Herzl even years after his passing?

Find more of Rabbi Reines’ manuscripts, here.   If you liked this article, try these: What Would You Serve at a Passover Seder During the Korean War? The Return of the Lost Siddur of the Jews of Catalonia The Letter of Apostasy: Maimonides as a Refugee