The Jewish Stew Made of Anything but the Kitchen Sink

With very few fresh ingredients at their disposal, the Jews created a plethora of dishes that took full advantage of the limited components that were available. 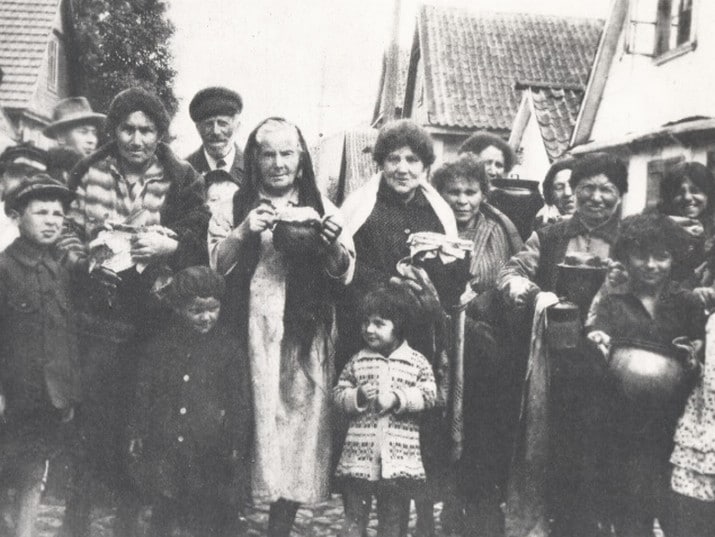 There is a level of unappreciated genius behind the Jewish culinary experience. With very few fresh ingredients at their disposal, the Jews created a plethora of cultural dishes that took full advantage of the limited options that were available.

There is a certain magic that comes with eating a bowl of carefully prepared, piping hot, aromatic Cholent on a cold Shabbat afternoon. The dish can only be described as a masterpiece of ingenuity and a work of art that has withstood the test of time to make it from the Middle Ages to modern day food establishments, cook offs and the typical Shabbat table.

The “anything goes” style dish can best be described as Jewish comfort food, came into being as a result of the Jewish law that forbids cooking on Shabbat, the Jewish day of rest. The dish is cooked on Friday afternoons and left on the heat for a long, slow overnight cook. The traditional, rich stew is comprised of whatever fixings are available on hand with ingredients and styles varying by country and continent, wherever Jews can be found. The typical Ashkenazic Cholent, stemming from Eastern Europe, is made from dried beans or barley, chicken or beef scraps, potatoes and assorted spices.

The name of the stew typically varies by location as well. The term Cholent is believed to stem from the French word, chald, meaning warm, referring to the low and slow method of cooking the meal in a pot. Others believe it stems from the Hebrew SheLen, meaning rested, referring to the overnight cooking method that would ensure a hot meal on Shabbat afternoon. In the Sephardic tradition, the dish is called Hamin, derived from the Hebrew word, Ham, meaning hot.

Heinrich Heine, the famous poet who converted from Judaism to Protestantism due to political pressures, was so enamored by the traditional dish that he wrote a poem professing his love and sharing his feeling that the recipe for Cholent must have been given to Moses by God Himself.

“Cholent is the food of Heaven, And the recipe was given By the Lord himself to Moses One fine day upon Mount Sinai

Cholent is God’s bread of rapture, It’s a kosher-type ambrosia.”

While this may seem like some serious love for a good pot of Cholent, a little parodic pamphlet written in the early 1800’s from the National Library’s Ephemera collection tells a tale of a lost love and the adversity and horror faced when a pot of Cholent gets tragically burned.

The pamphlet tells the story of an old man sitting at his Shabbat table surrounded by his family, eagerly awaiting the arrival of the traditional pot of Hamin. The dish arrives at the table and the old man opens the lid expecting the beautiful aroma of a perfect stew to wash over him but instead, to his horror- the contents of the pot have been completely burned. So deep is his sorrow at the sight of the smoky pot of food that he feels compelled to eulogize the poor stew.

The satirical eulogy concludes with a Mi Shebeirach (a public prayer or blessing recited aloud for an individual or a group), calling for God to bless the poor anonymous man who was served a pot of burned Cholent on the holy Shabbat.

This dedication and commitment to Cholent also found itself in the shtetls of Europe, where, on Friday afternoons, each family would walk their hot pot of freshly prepared Cholent down the road to the local bakery. There, the assorted pots, sealed with a paste of flour and water, would be placed in the baker’s oven to keep warm overnight. On Saturday afternoons, following the conclusion of prayer services, the reverse pilgrimage would take place when families would carefully fetch the hot pot from the oven in time for lunch.

Today, Cholent has its own cult of following. On Thursday evenings in Israel, there are many who flock to the eateries in the Ultra-Orthodox neighborhoods to treat themselves to a pre-Shabbat Cholent to ring in the weekend. For those who don’t live near a restaurant where Cholent is served, the dish is also readily available in easy to prepare packets and, in some countries, you can even buy it ready made in a can from your supermarket shelves- although we definitely recommend the homemade version.

The consumption of the heavy, aromatic stew tends to cast a spell on diners – one that can only be compared to the lethargy that comes following the perfect Thanksgiving turkey – lending to the perfect atmosphere for a good nap on the day of rest.

There is an old saying that claims you cannot consider yourself a good Jew unless you eat Cholent on Shabbat – but we believe a good pot of Cholent can be enjoyed any day! Perhaps it is time to break out the old cookbooks and give it a try?