Leafing Through the First Printed Book: The Gutenberg Bible

History is being preserved at the National Library of Israel with the conservation of two pages from an original Gutenberg Bible. 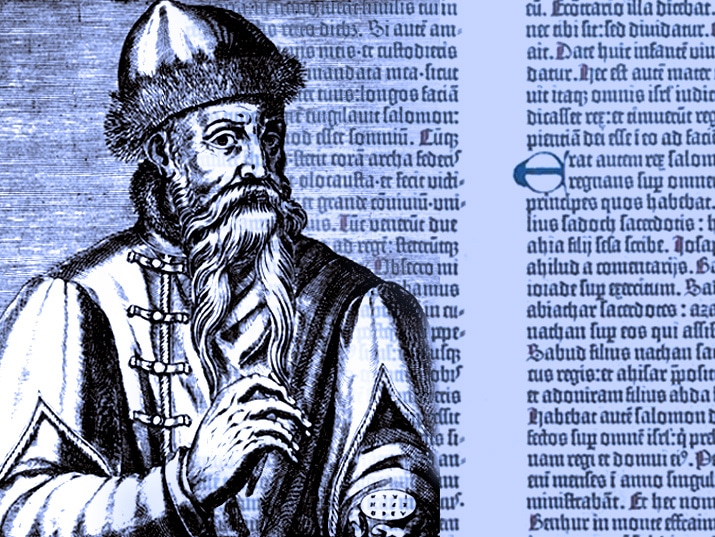 Though there is no doubt that the Chinese were initially ahead of the curve when it came to printing technology, the printing press invented by Johannes Gutenberg took Europe by storm in just a few short years. Initially Gutenberg printed only single sheets of paper, leaflets containing poems, games, and short stories, but once he managed to convince investors to fund his invention, he printed the first edition of the first printed book in history in 1455: 180 copies of the world’s all-time best seller – the famed Gutenberg Bible.

There may have been earlier attempts at developing a quick and efficient way of copying text, but Gutenberg’s method was the one that caught on in Europe and is still the basis of printing technology today, even in the electronic and digital era. In 1500, less than 50 years after the first printed book made history, there were already millions of printed books available throughout the European continent – some of which were printings of the Bible and other works that pre-dated the printing press, along with other, brand new works.

The Gutenberg Bible, the first printed book, deserves an additional title: The First Printed Work of Art. It’s a 1,286-page masterpiece written in Latin using artisanal engraved Gothic script. Additionally, it features illustrations and decorated letterheads that were engraved and painted by hand. Of the initial 180 copies printed by Gutenberg, only 49 have survived over the centuries. The National Library of Israel doesn’t have a full copy in its possesion, but does hold two pages from an original copy of the Bible.

The invention of the printing press changed the world entirely. It enabled unprecedented distribution of knowledge and information, intrigued and intimidated authoritarian regimes, was a contributing power behind the Protestant Reformation, brought about the common layout of the Talmud, jump-started literacy, and was, according to historians and other researchers, a major enabler in the rise of nationalism in the modern era.

Though you may be reading this article on a digital screen, even now, 600 years after the first publication of the first printed book – print is far from dead; the same can be said about the first work brought to print by Gutenberg: The Bible itself.