A glimpse into a Haggadah written for the residents of the displaced persons camp in Munich, illustrated by a Holocaust survivor. 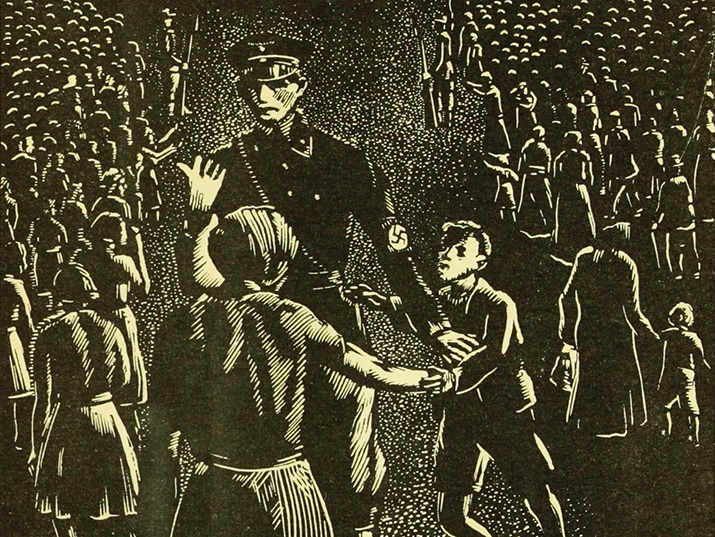 For many of the residents of the displaced persons camp in Munich in April, 1946, the upcoming Passover Seder symbolized more than the Jewish people’s historical redemption; it was the reality unfolding before their eyes. Many of the survivors clustered together in the displaced persons camp had hoped that they would celebrate Passover of 1947 far from the land where their loved ones had been slaughtered, far from the land in which the Nazis and their collaborators aimed to destroy them and the entire Jewish nation. Those in the know spoke about that Passover night as the “Seder of the exodus from Europe”.

Yosef Dov Sheinson, a resident of the camp, wanted to express this sentiment in a Haggadah which he wrote for the Seder in the displaced persons camp. The excerpts in Hebrew and Yiddish which Sheinson added to the traditional haggadah are accompanied by woodcuts by the Jewish-Hungarian artist Zvi Miklos Adler, who signed his name in the Haggadah as “Ben Binyamin”.

Depicting the horrors of the Holocaust which he himself experienced during the war years, Adler’s harsh drawings complement the text of the Haggadah. In an illustration corresponding with the well-known sentence “for not only one has risen against us to destroy us” we see a soldier shooting several wretched looking prisoners, while another soldier leads a group of stooped prisoners toward an unknown destination. The picture gradually fades away as the prisoners move away from the center of the event.

The intertwining of traditional text and modern pictures illustrates the way the creators of the Haggadah grasped the historical moment in which they lived: in each and every generation a person must see himself as if he left Egypt, but it is not in every generation that a person undergoes horrors which darken his world and dwarf the suffering experienced by his ancestors.

The need to talk about and deal with the terrible topic is tangibly and explicitly expressed in the Haggadah in an illustration which is hard to look at, and under which is written, “Therefore we are obligated…”

While this excerpt in the Haggadah is usually dedicated towards praise and thanksgiving to God for redeeming us from Egypt, the expression on the face of the survivor at the bottom of the picture shows quite the opposite.

Passover Seder in the U.S. Army

A copy of this haggadah reached Rabbi Avraham Klausner, an American army chaplain who was in the midst of preparing for a Seder of the U.S. Army forces stationed in Munich. He decided to conduct the Seder according to this haggadah, making a single change – he added an introduction addressed to soldiers in General Eisenhower’s army (whom Klausner compared in his introduction to a modern-day Moses).

Rabbi Klausner’s introduction is in the same vein as Sheinson and Adler’s work, equating Hitler with Pharaoh and the suffering the Jews endured in Egypt with what the Jews went through in the concentration and death camps.

The invite list to the Seder conducted by Rabbi Klausner in the Munich Theatre, held on the same night as the Seder of the displaced persons camp in Munich, is preserved in the Central Archives for the History of the Jewish People. The list shows that only a few of the five hundred participants of the Passover Seder conducted by Rabbi Klausner were Holocaust survivors. The majority were soldiers in the U.S. armed forces.

The letter A was stamped on the title page of Rabbi Klausner’s private copy, indicating it belonged to the U.S. Army. On the same title page is the date and the location of the Seder at which the Haggadah was used: Munich, Germany, April 15-16, 1946″.

Rabbi Klausner’s personal copy is currently stored in the Haggadah Collection of Aviram Paz. It was lent to the National Library for its “Next Year We Will Be Free Men” exhibition – an exhibition of unconventional Passover Haggadot from the years leading up to the founding of the state.