The then-revolutionary photochrom method gave the world its first color pictures — based on the imagination of the employee working the printing plates. 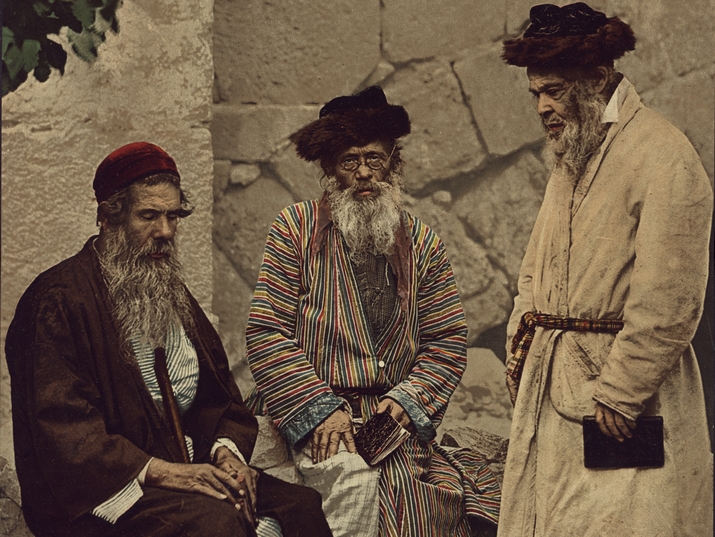 An Ashkenazi Jew in a rainbow-colored striped gown, center

The National Library’s photo collections include two albums whose pictures were produced at the end of the 19th century using the process known as photochrom. What was this method and why do the photos resemble oil paintings more than the black-and-white originals?

The first color photo was taken in 1880 by Thomas Sutton, a student of the mathematician and inventor James Clerk Maxwell. It was a picture of a scarf.

Even though the technique for making color photos was developed within decades of the invention of photography, it would take more than 100 years for color photography to relegate black and white to the art world. The mass shift towards color happened in the 1970s. Until then, color photography involved expensive techniques used almost exclusively by professional photographers. In its first few decades, it was considered unreliable.

Twenty years after the creation of the first photographic image, a Swiss printer named Orell Fussli developed photochrom. Unlike color photography that captures the object’s original colors, the photochrom technique involved coloring black-and-white photos. Fussli’s innovation was to use lithography, a printing method that had been around for centuries.

Within a few years, photochrom became widespread. Its main advantage was its low cost and relative ease of producing multiple copies that could be sold.

In 1888 the company Fussli worked for opened a subsidiary called Photochrom Zurich. From its inception to the 1920s the company used its patent to dominate the global market for color photos. Zurich was the place to go to for anyone wishing to splash color in a photograph.

The Swiss company’s monopoly led to an interesting twist. In the absence of specific instructions, company employees had no way of reconstructing the original colors in a black-and-white photo. So they simply had to rely on their imagination.

This brings us to those two albums in the National Library in Jerusalem.

The first album, produced in 1900, is a collection of photos from a pilgrimage by a group of Austrians to the Holy Land. But it wasn’t the tourist-pilgrims who took the photos. At that time there were several professional photographers in Ottoman Palestine. The pictures were taken by the professionals, and the coloring was done by Photochrom Zurich.

The pilgrims, like other clients who were interested in photos from the Holy Land, selected their favorite pictures, apparently of places they had visited on their tour.

Therefore it is no surprise that most of the photos in the first album show key locations in Jerusalem and nearby areas. The only other location shown in the photographs is the coastal town of Jaffa. In that photo, Jaffa longshoremen are seen rowing the boat of renowned tour guide Rolla Floyd.

In this album, the entrance plaza to the Al-Aqsa Mosque was adorned with wonderful colors, while Jaffa Gate, the Lions’ Gate and the Foundation Stone in the Dome of the Rock also recieved the photochrom treatment. It’s possible that the way these photos were colored reflects the conceptions the Swiss employees had of the land’s inhabitants. In all the photos they are shown wearing heavy garments with loud color combinations.

We know very little about the history of the second album, which was produced earlier. We do know that on every cardboard page there is a stamp of ownership belonging to a Swiss evangelical school. It’s possible that the owners actually visited the Holy Land, but it is also possible that they simply purchased the album from another source.

The 36 photochrom prints in this album show landscapes in Ottoman Palestine and Syria. Several photos in the first album are found in the second one as well, and in some cases the photos show the same scenes at a slightly different moment.

In any case, this album illustrates several examples of the artistic freedom of the Swiss company’s employees. One example is a photo of an Ashkenazi Jew in a rainbow-colored striped gown – most likely not faithful to the original.

And this article cannot end without mentioning the beautiful photo of the Western Wall from the end of the 19th century. Men and women are seen leaning on the wall attired in a vivid array of black, white, red, green and brown.