The documents from the Historical Archives of Belgrade tell the story of Isak Darsa, a young boy murdered in the Sajmiste concentration camp at the hands of the Nazis. 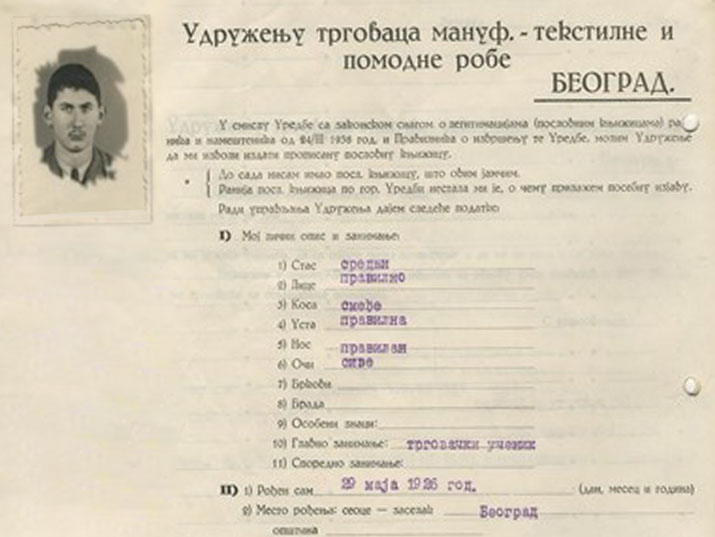 Application to the Merchants’ Association, courtesy of the Historical Archives of Belgrade

Tracing the lives of average Jewish citizens who perished during the horrors of the Holocaust can be extremely difficult- especially if there were few to no survivors in their immediate family. The Historical Archives of Belgrade holds several documents that have helped retrace a part of the story of Isak Darsa, a young man with a bright future ahead of him, that was cut short by the Nazis.

Benjamin Darsa, Isak’s father, was registered for the first time as a citizen of the Belgrade municipality in 1924.  Benjamin’s certificate of permanent residence can be found in the Citizens’ Cards Register within a collection marked Administration of the City of Belgrade. The certificate reveals that Benjamin was born in 1896 to parents Isak and Gintil Elic in Zemun, which at that time was considered a seperate city but today forms part of Belgrade.

Benjamin worked as a clerk in a French-Serbian bank and on November 18, 1923, he married Estera-Stela nee Kalef of Belgrade at the old Synagogue Bet Israel. The young couple lived together in a leased house in the center of Belgrade.

Isak himself was born to the couple on May 29, 1926, and the next year, the little family moved into their own home on Prince Evgenie Street (modern-day Braca Baruh Street) in Dorcol, a Belgrade district where Jews formed a majority of the population. Technical documentation belonging to the city of Belgrade has preserved the floor plans of the Darsa family house and show that the architect who designed and built their home was Franja Urban, who would later become famous for his work in designing the new Belgrade Synagogue, also known as Sukkat Shalom Synagoue, in 1929.

Isak Darsa attended a local elementary school in the neighborhood. A glance at his school register shows that his grades were nothing more than average as he was marked with a three on a scale of five in all of his school subjects.

In 1938/39, after finishing four grades of elementary school, Isak Darsa continued his education in the First Male Gymnasium. While he may have proven himself to be average in elementary school, he did not manage to keep to that standard in secondary school as his grades in the Gymnasium were even poorer. Isak barely managed to pass his final exams. While it is unclear if it was due to his poor grades or due to the rise in anti-Semitism across Europe, at the age of 13, Isak did not return to the Gymnasium for the next school year.

While school may not have been the right place for him, Isak Darsa did manage to leave us another clue as to what he accomplished in pre-war Belgrade. In February 1941, three months before the war broke out in Yugoslavia, Isak began working with a merchant’s apprentice in a fashion store named Benvenisti and Pinkas on Kolarceva Street in the city center. At that time, sixteen-year-old Isak put in a request with the Merchants’ Association to be issued an occupation license. He submitted his photograph along with his application to the association as a part of his request for a license.

Unfortunately, the Darsa family met the same fate as most Jewish families living in Belgrade during the Holocaust. Benjamin, Stela and young Isak were murdered by the Nazis.  Isak’s aunt and Stela’s sister, Regina Kalef Eskenazi, who survived the war, reported the deaths of all three Darsas in 1945. Stela and Isak met their end in the Sajmiste concentration camp in 1941 and Benjamin was shot at the Tasmajdan killing site in October 1941. Regina also submitted their war damage claim describing their destroyed and confiscated furniture, clothes, and jewelry.

Benjamin, Stela and Isak Darsa have since been registered in Yad Vashem’s victims’ database.